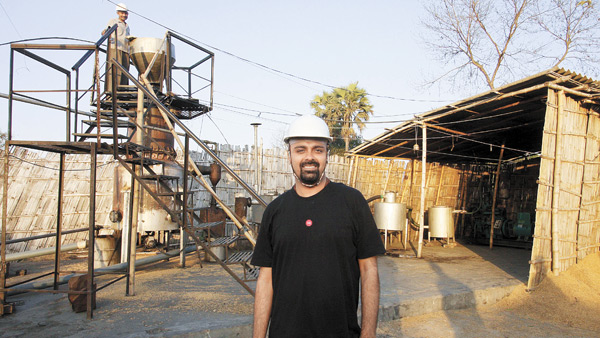 Bihar has 1,89,40,629 households (rural: 1,69,26,958 and urban: 20,13,671), but only 30,98,435 have electricity. Plus, you have  2,058 villages with access to energy, but no electricity in the grid. This represents a great opportunity for HPS.  But to HPS's disadvantage, the average cost of power supplied by Bihar State Electricity Board (BSEB) to villages stands at Rs 5.50 per unit. It is Rs 9 per unit for power from HPS's plants. Thus, grid power would be HPS's biggest challenge once it reaches these villages which, going by its slow  progress, seems a distant dream.

In addition to spending more than half a million dollars on research and development and on technology aggregation (retrofitting plants with the advanced systems), HPS had to invest a lot to train unskilled folk to run the plants. It also decided to set up a vocational training institute: Husk Power University.

The Status Quo
HPS has added some 66 plants in the past two years. It has trained and employed nearly 400 unskilled locals and, the Husk Power University is a "work-in-progress". Says Pandey, "We were supposed to get funds for the next round of expansion by the third quarter of last year, but it has been delayed. I would rather reserve my comments on the reasons for the delay. We just were not seasoned enough to know the game as it is played. The government's subsidy has not been disbursed in time as well."

The BSEB is sceptical of the entire enterprise. "The scope for expansion is a bit limited (for husk power). I do not see much hope," says a senior BSEB official.

Investors, however, are upbeat: "The past year has been one of consolidation for the company, developing systems and new technologies including an in-house training facility for plant operators. Husk's management has a solid strategy. And with the support of investors, it will be exciting to see them provide electricity to 300 villages, serving more than 500,000 people by 2014," says Karthik Chandrasekar, energy portfolio manager, Acumen Fund. These plants will come up in Bihar, eastern Uttar Pradesh, Jharkhand, Orissa and Chhattisgarh as well as Nepal and Africa. "Outside of India, our major thrust would be in Africa where we plan to have close to 25 plants by the year-end," says Puneet Rustagi, director of business planning and strategy at HPS.

HPS intends to build up to 200 plants of its own, while 2,800 more would be franchises.  "When we started, the model was build, own and operate. We realised that if we wanted to achieve our vision of installing 2,000-3,000 plants, we had to devise a different model," explains Rustagi.

"HPS and my personal focus has not been just numbers, but developing a self-sustainable ecosystem. Investors have a different view. The social investment space is full of mad, dirty games. If I have to engage in another round of funding, I will change the plan," says a disgruntled Pandey.

He confesses to a timeline of 4-5 years before he quits as CEO to assume a less active role in HPS. What about the vacuum in his absence? Pandey turns philosophical. "Every leader has a lifespan and every organisation needs a change at the top. Even Muhammad Yunus left Grameen Bank (in Bangladesh) so that a new management could take over."