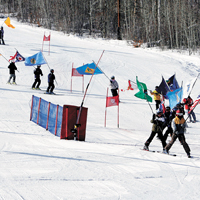 08 November, 2014
Print this article Font size -16+
If offbeat destinations don't impress you, then check out those ski resorts that have held visitors in thrall over the decades. Most of these resorts are either in North America or in western Europe. Take Whistler-Blackcomb valley in British Columbia, Canada, for instance. A perennial favourite for tourists (2 million of them flock to the place every year!), Whistler-Blackcomb is the largest ski resort in North America, offering 8,000 acres (around 32 sq. km) of skiing terrain. That includes three glaciers, 200 pistes and one vertical mile. From heli-skiing to snowboarding to cross-country skiing, you can try anything.

In the US, a virtual hotbed for ski lovers is Vail Mountain resort, founded in 1962. With more than 5,200 acres (21 sq. km) of skiing terrain, it is second in size in North America only to Whistler-Blackcomb. It has 193 trails, with the longest run being Riva Ridge (6.4 km). And yes, the resort is among the most expensive in the world.

Also catering to an upscale audience is Deer Valley resort in Utah. It offers special amenities such as free ski valets and free parking shuttles. With a total skiing area of 2,026 acres, Deer Valley is one of the world's few remaining ski resorts that prohibit snowboarding. It also offers great fine dining options. Best time to be here is December-April.

If America has its ski heartlands, so does Europe. The Dolomites, or the Superski Dolomiti, in north-east Italy is a virtual ski feast. A group of peaks that offers 1,220 km of slopes, served by 12 ski resorts with more than 450 lifts, make this a true skiing paradise. The sheer vastness of the area means that every skier, no matter what skill level, will find a place to swing into action. Downhill skiing here is the most popular activity. Skiing season is mid-December to mid-March, so rush!

Then there is Chamonix in France, site of the first winter Olympics in 1924. France's oldest ski resort has tougher terrain than normal ski resorts, and so is perfect for advanced skiing and snowboarding. The valley has about six ski areas that provide challenging off-piste runs. Then, if you're visiting France, you can't miss its other attractions, such as Paris with its Eiffel Tower, Notre-Dame, Champs-Élysées… we're digressing, but you get the point.

Going skiing? first, get your destination fixed. Then get the right gear. These days, technology makes you comfortable and safe even in the most chilling conditions. Women can use Supreme boots from Burton, which come with a set of batteries. You charge the batteries and clip them on to the shoes and, hey presto! Your shoe is warmed up to keep you comfy through the day. Men can get a HotGear bag, which also keeps your boots as well as all other gear — socks, jackets, gloves — warm. Just plug the bag into your home socket, or even your car socket, and you're ready to go.

Goggles from Zeal Optics have anti-fog lens, and can also tell you your speed, altitude, time, current temperature, even your GPS coordinates. Also look for jackets that are weatherproof (but breathable), and have multiple pockets; Spyder makes some of the best skiing jackets around. Salomon's Custom Air helmets fit any head perfectly with the help of a tiny air pump that inflates the internal bladder. Salomon also makes some of the best skis. Its latest model, Salomon Sentinel 2011, has titanium mixed into the wood core and has been well received by experts. Enough said, now time for some action!