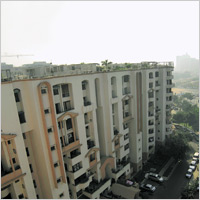 As they watch Dubai's hugely leveraged property sector crash, real estate developers in India must be heaving a sigh of relief. They too suffered a severe rap on the knuckles after the financial crisis of 2008, but have now limped back to some semblance of normalcy. Debts have been rescheduled, demand (at least in certain segments) is slowly picking up, and buyers and investors — though still suspicious — are willing to listen. The fate of Dubai is not clear as of now, but in India, the real estate sector's crisis — barring some small players who still risk going bust — seems to have temporarily receded.

For three years (2004-07), a heady mix of unchecked growth and expansion, huge inflows of money and unscrupulous practices permitted the sector to enjoy rates of return way beyond any other. Returns of 100-200 per cent on projects were not unheard of. Developers were not keen to work on a project unless it promised astronomically high returns.

Even when the economic crisis struck in 2008, India's real estate developers were relatively safe. Post crisis, realty companies listed on the stockmarket still enjoyed massive profit margins. The net profit-to-sales ratio for listed companies stood at 36 per cent in the past 12 months. With a profit margin of 42 per cent, the 12 months prior to that was even better. In sum, the real estate sector in India continues to have a party.

But this wild merrymaking could actually be coming to an end, if a proposed model real estate regulation Bill floated by the Centre becomes the law. The government hopes to convince the states to adopt the Bill. And if that happens, it could change the way the sector functions here. "Perhaps, no other sector in India has been as little regulated as this, and no other that needs it more," says Finance Secretary Ashok Chawla. He says the government is obliged to protect consumers, especially from dubious developers who often promise way more than what they deliver.

Regulation can prevent a Dubai-like casualty, say experts. Some argue that Indian companies have just escaped what is happening in Dubai now. Jayesh Desai, partner, Ernst & Young, who has been tracking the sector for over 15 years, says India's recent real estate crisis, which for now seems to have subsided, was mainly the sector's own making, coupled with the fact that there is no regulation in the industry.

Drawing a parallel, Desai says companies in both India and Dubai "borrowed heavily to build (land) banks, and to invest in projects with long gestation periods". Indian companies have — at least for now — been rescued by banks in India, and buyers have not been hurt too badly. But in Dubai, many buyers are likely to suffer, something that strong regulation could check. "Industry, especially the larger players, should be seeking regulation, not opposing it," says Desai.

The call for strong regulation is echoed by many. Sachin Sandhir, who heads independent regulatory body Royal Institute of Chartered Surveyors India, says regulation is essential in India where he fears "another bubble is rebuilding" even before the last one is fully over. "Regulation is very much needed. Buyers currently have no recourse, and this would be an alternative redress mechanism." He also says it is not always the developer who is to blame for delayed or incomplete projects. So, a third body mediating and listening to all points of view could work even to the developers' advantage. "Regulation will be good for all concerned including developers and the health of the industry," says Sandhir.

Just Another Stumbling Block
Of course, there is a big lobby that begs to differ. Real estate firms — particularly the large, organised ones — are against a regulator as well as many provisions in the Bill. Though neither DLF nor Unitech wanted to go on record for this story, some of their officials spoke in their individual capacity. "This is just another licensing authority. You can add one more to the number of clearances (50-60) and agencies we need to pay off," says a top official with one of the largest real estate firms. The companies refuse to be quoted since they are in "a constructive dialogue on the Bill with the government" and do not want to be singled out as opposing it. "The Bill is nothing short of draconian," says a real estate company CEO as he rattles off all the negatives he sees in the Bill.

The industry is questioning some of the best provisions of the Bill. To start with, the developers argue that the regulatory authority would be just another way for the officials to make money. But Kiran Dhingra, secretary at ministry of housing and urban poverty alleviation, denies this. "The idea is only to bring in transparency. If you are a developer, and have got a project approved, you put up the information on the regulator's website," she says. "Everyone has access to this information. So, chances of buyers being cheated or putting their money into dubious projects are reduced. Nowhere have we said the regulator will register or license the developer."

Dhingra says they get several complaints of developers selling land that does not belong to them (so it cannot be transferred to the buyer) or delaying projects for 2-3 years. "At least, all these will stop. Developers cannot sell projects unless they have all the approvals," she says. "Who will protect such consumers? The regulator will provide redress in these cases," says Kumari Selja, union minister for housing and urban poverty alleviation (see interview on page 30).

This also annoys the developers. They argue that in too many cases, delays in a project are caused due to the authorities not giving clearances on time. Another provision they oppose is the need to provide a 5 per cent bank guarantee to the "competent authority". Asks one of the executives of a large real estate firm: "Who will decide which is the competent authority? Will it be in a position to finish the project? For instance, would you trust HUDA (Haryana Urban Development Authority) to complete an apartment block you invested in?" The developers say such provisions will only raise the project cost, which will have to be borne ultimately by the buyer.

The Bill provides an alternate recourse mechanism, other than the notoriously slow courts, to consumers. It stops developers from using the money raised for one project to buy land for or develop another. "This is critical since many developers are tempted to use the proceeds from one sale to buy land for another. As a result, consumers have to wait endlessly for their project to begin, let alone finish," adds Dhingra.

In fact, some firms are able to see the advantages of the Bill — provided it is not too stringent and just separates the wheat from the chaff. Says Gaurav Bhalla, managing director of the Vatika Group: "Regulation is desirable, but it must be within limits." It should ensure that the dubious, fly-by-night developers are weeded out and consumers are not cheated, but should not make the life of more credible players difficult.

Bigger Is No Better
Not everyone, however, agrees that established players are any better. In fact, a number of complaints are against well-known developers. And one does not need to look far for examples. In Gurgaon, developers such as DLF and Unitech have come under fire for delayed projects, changes in specifications and not providing even the basic facilities. "I used to be an advocate of Unitech, but now if someone paid me to buy Unitech properties, I would not," says Rakesh Seth, managing director of marketing solutions firm Finedge India. He has invested in a few Unitech projects, all of which are delayed by over two years.

In a unique case recently, residents at Ambience Lagoon Island in Gurgaon have got together to throw the developer out. They say the developer has built a new hotel and mall in area designated for residences. They charge the developer has slowly taken away their tennis court, and has rented out area in the clubhouse to call centres. The fight has got ugly enough for the residents to issue a notice to the developer to vacate. Says Deepak Gupta, vice-president of Ambience Residents Welfare Association: "We have suffered in silence for seven years, and have tried to make peace. But we have now been pushed to the wall." He says this is not a unique problem — many RWAs in Gurgaon or Noida have similar stories.

For example, DLF's Aralias and Ikon projects on Gurgaon's Golf Course are either delayed or have been relaunched after being sold at exorbitant rates at which there were no takers (DLF BelAire and DLF Park Place). DLF Magnolia, again on the same road, has seen changes in the number of floors and other specifications, besides being delayed. In Chennai, DLF flat owners forced the developer to reduce prices of apartments sold to them during the boom period.

Worse than delays are cases where residents are forced to live without basic, essential amenities. Mukul Deva, managing director of MSD Securities, who stayed in Unitech's Uniworld Garden in Gurgaon, found to his horror that trucks came in every night to the chic complex to remove the day's sewage. The complex, where flats cost more than Rs 1 crore, does not have basic sanitation, he says. It was one of the reasons why Deva decided to move out of not only Gurgaon but India — he is now based in Singapore.

Most buyers, hence, would be happy if the new Bill were to become a reality. But that is a big if. A large real estate lobby is working to water down the key provisions in the Bill. While they feel the current draft is a lot better than the initial one the ministry started out with, they are still unhappy. Further, this being a model Bill, it has no legal validity or binding on the states. Dhingra hopes the government will be able to persuade the states to adopt the Bill, and set up regulators.

But this is also easier said than done as, often, politicians who make laws are in cahoots with the builder lobby. Many are sceptical whether the political class is able to see the benefits of protecting consumers, and weigh it against protecting the builder lobby. Till it does, consumers have to just keep their fingers crossed.