The Race To Gain ‘Fame’ 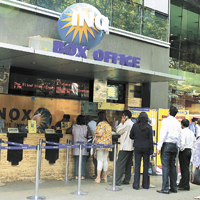 The battle for multiplex chain fame cinemas is likely to be a long-drawn affair. Reliance ADAG has let loose a fusillade on INOX Leisure’s acquisition of Fame’s promoters’ 43.28 per cent stake claiming the promoters — Shravan Shroff and family — had shrugged off an offer of Rs 80 per share by Reliance MediaWorks (RMW) and instead opted for a bulk sale at Rs 44 a share. R-ADAG has hit back with group company Reliance Capital picking up 8 per cent of Fame in the market over the past few days.

The big picture is the fight for expansion. The Fame acquisition has given INOX, a division of Gujarat Flurochemicals, an additional 95 screens, taking its tally to 204, ahead of PVR Cinema’s 134 screens. INOX, now on second spot, is within striking range of the No. 1 RMW’s (earlier Adlabs) 246 screens.
RMW CEO Anil Arjun has taken a moral high ground. He said he had made a firm offer of Rs 80 per share prior to the INOX deal, and its rejection by Shroff as head of a public limited company involved “issues of fairness, transparency and legal compliances”. In response, Shravan Shroff, director of Fame, told BW categorically: “There was no written, firm offer from R-ADAG. In fact, we had two other firm offers. One from Cinepolis, and another from a Korean company. Everyone was talking to everyone, but does talking to ADAG amount to a contract?”
Denying this, an R-ADAG spokesperson said: “Today deals are done on email”, and revealing their contents at the right time was part of the war plan. Arjun says RMW would be submitting a formal complaint to Securities and Exchange Board of India (Sebi) and other authorities to initiate government action against the deal.
The R-ADAG camp has also been hinting darkly that the price of Rs 44 a share is only the official, book amount. “Any sale of a controlling stake — and if we examine the last 10-15 such deals — involves a premium. In this case, the Fame promoters’ stake has been sold at the prevailing market price. Further, the Shroffs have signed a non-compete agreement. To give up the right to compete also usually translates into a premium for the controlling stake being given up,” says an R-ADAG spokesperson.
What are the legal options for R-ADAG in case Sebi fails to act? According to corporate lawyer Navroz Seervai, a minority shareholder of Fame can file a petition to seek an injunction against the sale. If Reliance Capital can cobble up a 10 per cent stake in Fame, it can even move the Company Law Board to block the deal, he adds.
The multiplex industry, however, is going through a tough consolidation phase. Some early movers are finding it unviable. “I sold because the business does not have the margins that can make it viable. It can only be paying through larger, consolidated structures,” says Shroff.
A quick look at the numbers shows cinema exhibition to be a tough game. Fame recorded a net profit of just Rs 3.4 crore on a turnover of Rs 114 crore in FY09. And for the first nine months of this fiscal, it has posted a net loss of Rs 3.54 crore. RMW, probably because of its rapid expansion, has borne a net loss of Rs 54.6 crore for FY09 and of Rs 89 crore in the first nine months of FY10. PVR, for the first six months of FY10, showed a net loss of Rs 5.8 crore.
The past few years have seen small operators quit, leaving fewer, but larger players to fight for the turf. It began in July 2005 with R-ADAG buying a controlling stake in the Manmohan Shetty-promoted Adlabs for Rs 350 crore. In 2006, INOX bought Calcutta Cine’s nine screens in Kolkata and Assam. In November 2009, DLF-owned DT Cinemas sold their 29 screens to PVR Cinemas in a cash-cum-share deal valued at about Rs 60 crore.
As Reliance ADAG and INOX slug it out for control of Fame, in the months to come multiplex ownership will see more consolidation.
(This story was published in Businessworld Issue Dated 22-02-2010)
Tags assigned to this article:
magazine gurbir singh reliance adag sebi reliance mediaworks inox inox fame deal