The Question Of Image 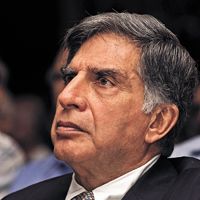 Trust and the Tatas have a lot in common besides the letter T. But with the 2G controversy continuing to create headlines and the Tata Group sucked right into the centre of the dispute, has that trust factor come under a cloud? As chairman Ratan Tata is in the middle of a Supreme Court battle to freeze the publication of tapes featuring his phone conversations with Tata Group's PR agency head Niira Radia, Businessworld in association with market research agency Synovate gauged the impact of the 2G scam on both the Tata Group and its chairman, Ratan Tata.

We spoke to 198 middle and senior-level executives across eight cities — Delhi, Mumbai, Kolkata, Chennai, Bangalore, Hyderabad, Pune and Ahmedabad. Respondents were asked two simple questions. One, has the Tata brand been hurt by the 2G crisis and the Radia tapes? Two, has Ratan Tata's personal image been hurt by the controversy?

Considering that both questions cannot be brushed off with a simple yes or no, we asked respondents to give responses across five parameters — completely agree, somewhat agree, neither agree nor disagree, somewhat disagree, completely disagree (see ‘Trust Vote').

The good news is that few respondents preferred to sit on the fence this time. No more than 8 per cent of respondents chose to toe the "neither agree nor disagree" line. That did not mean smooth sailing for the Tatas, though. The personality of Ratan Tata withstood the crisis better than his group as more respondents (30 per cent) vehemently disagreed that his personal image would suffer as the muck flies thick and fast on the 2G mess.

Chennai was more forgiving than the rest of the country with practically all respondents giving the group a clean chit. We are not sure if the ruling party DMK and former telecom minister A. Raja will get a similar reaction. The most critical responses came from Delhi and Kolkata, not necessarily in that order.

Among the executives polled, it was the fairer sex that came down a lot more heavily on the Tatas than the men. And the respondents from the top management ranks were more forgiving than their subordinates from the middle management, especially when it came to being on the side of Ratan Tata. Almost 56 per cent of respondents from the top management disagreed with the view that Ratan Tata's image would take a battering with the 2G crisis, as opposed to only 36 per cent of middle managers who gave Tata the benefit of doubt.