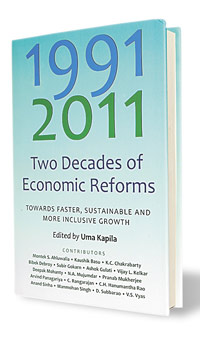 Two decades of reforms is a long enough period to do some introspection, especially today when there is an air of despondency with all fingers pointing in the direction of their absence. In fact, it is agreed today that more reforms is the only way out. There is a sense of déjà vu as we talk about those good old days of reforms that started in the nineties. There is also a counterview that the Indian growth story is exaggerated and that we are capable of growing only at 6 per cent and not in double digits. This is where these two books on reforms come in handy with their thought-provoking views on the impact of reforms.

Uma Kapila’s Two Decades Of Economic Reform is a compilation of 20 articles by eminent economists who have either worked on the government’s side in bringing about these reforms or have followed them very closely as their critics. The consensus is that economic reforms have been a turning point and there is no looking back (Deepak Mohanty).  D. Subbarao talks about making the elephant dance again as the growth story is intact and we only have to get our act together by adding another chapter. The solutions offered by the central banker are well known and quite to the point. Subir Gokarn shows how reforms helped bring in certain resilience during the financial crisis while Arvind Panagariya illustrates how all states have gained from reforms as the poverty ratio has come down, even though the absolute number of the poor is still high. There are other incisive articles such as the one by Anand Sinha on legislative reforms. Manmohan Singh and Pranab Mukherjee eloquently explain how reforms have delivered superior solutions. But, is that really so? Because if they have, then it is only a matter of time before we will be back on track.

Amid the set of articles praising the economic performance, N.A. Majumdar provides a refreshing view. His article titled ‘From Friedman to Gandhi’ makes us stop and think because,  while we extol the virtues of reforms and the proliferation of consumerism, there is a shadow alongside which we tend to often overlook. He shows how the first phase of reforms until 2004 was retrogressive, when we were soaked in the market theology of the World Bank and the IMF, skipped the basic issues of development, that is agriculture, and had a disdain for anything that had to do with the poor. The subsequent phase is when we have gone back to Gandhi, when even the financial crisis exposed the errors of unbridled capitalism. Now we are addressing the concerns of the poor, which is logical and fair. In fact, he argues that this entire business of targeting the public distribution system has exacerbated poverty in India, and terms it a development atrocity. He extends this logic to our interest rate policy, saying it is biased against the farmer who pays 12 per cent while top corporates get away with 6 per cent. Majumdar is clearly at odds with Bibek Debroy who maintains that we should listen to our “brains” and not our “bleeding hearts” and move ahead.

The book also focuses on the farm sector and inclusive growth, with three stalwarts — Hanumantha Rao, V.S. Vyas and Ashok Gulati — writing on different aspects. Gulati argues that while we talk a lot about 4 per cent growth in agriculture, we have never made any attempt to create structures for the same, such as a 15 per cent rate of capital formation. He says we should be more pragmatic and bring in the essential linkages to make such goals more realistic. He suggests reforms in the system and points out how marketing practices as well as the Essential Commodities Act and the Agriculture Produce Marketing Committee need to change. These laws have long served their purpose and are now working against the interest of the sector by introducing rigidities. Vyas centres his discussion on the size of land holdings and the need to make agriculture more robust, while Rao asks us to be more patient as the road towards inclusive growth is slow and should be peaceful.

The rest of the articles are insightful but really do not go beyond the official view that reforms have taken us much ahead. The Five-year Plan perspective is well elucidated by Montek Singh Ahluwalia, while Vijay Kelkar provides his take on the disinvestment debate. There is a delightful piece by Kaushik Basu, who never disappoints as he distinguishes between harassment and non-harassment bribes and is sympathetic to those who have to give the former.

The other book on reforms, titled India’s Reforms: How They Produced Inclusive Growth by Arvind Panagariya and Jagdish Bhagwati, takes a different route to assess the impact of reforms. They are definitely pro-reforms economists who believe that this is the only way forward for the nation. They address two sets of issues through three articles by each. The first set includes reforms and democracy while the other is linked with trade, poverty and inequality.

They argue that reforms actually started in the seventies, got focus in the eighties and were well projected in a concerted manner in the nineties. Hence, to say that reforms were dictated by the IMF would not be fair, though the crisis could be called the tipping point. The authors use the case studies of progress in telecom and automobiles to show how prosperity has spread across the country.

They have dealth with the various issues using the Q&A approach: they take up issues raised by critics and make their point using  facts. The focus here is on how electorates vote parties back to power because of the impact of growth and reforms. They have used the 2009 elections to show that the ruling coalition came back to power because of performance, which proves that not only did people benefit from the policies but also favoured the Congress in turn. This theory is supported by the view that in 2009, the incumbents in high-growth states won 85 per cent of the seats while it was just 52 per cent and 10 per cent in medium- and low-growth states. More importantly, there was no difference in the urban and rural areas. They also credit the NDA for the telecom revolution.

Both these pro-reform books are extremely readable. Kapila’s collection is comprehensive, though there is a bias towards the establishment. Bhagwati and Panagariya, on the other hand, explore new hypotheses to show that reforms have actually delivered, which are extremely engaging, even if you do not agree with the approach, assumptions and conclusions.