The Pressure Builds Up 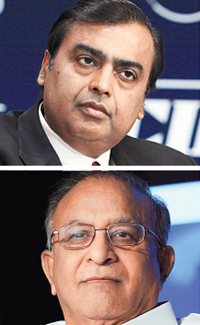 At the same time, the government cannot ignore the risk factors involved in the exploration business. "Natural calamities can alter the geology of the entire reservoir. The contractor is taking a financial risk while going for such huge investments," says an RIL official.

RIL chairman Mukesh Ambani, in a letter to shareholders that was published in the company's annual report, said that production from D6 was impacted due to "unforeseen reservoir complexities". RIL sources say the KG basin was a virgin area when production started in 2009. So the geological issues were unknown. "That is why we roped in British energy giant BP." BP paid $7.2 billion to acquire a 30 per cent stake in 21 of RIL's oil and gas fields.

RIL said it has cut the estimates of its proven gas reserves by 0.43 trillion cubic ft at the beginning of FY2012. RIL's reduced estimates reflect the firm's reassessment of its portfolio and the relinquishment of five blocks during FY2012.

The government has rubbished claims that RIL has not violated the PSC with regard to output; it has warned RIL of further action if it fails to submit detailed plans with timelines and steps being taken to remedy the default.

Some of the language of the PSC seems ambivalent; Clause 151 says the contractor can recover costs out of a percentage of total value of petroleum produced and saved from the contract area in the year. Separately, Clause 15.11 says: "…Such provisional determination of cost petroleum shall be made every quarter on an accumulative basis. Within 60 days of the end of each year, a final calculation of the contractor's entitlement to cost petroleum, based on actual production quantities costs and prices for the entire year shall be undertaken and any necessary adjustments to the cost petroleum entitlement shall be agreed upon between the govern- ment and the contractor within 30 days and made within 30 days thereafter."

Therein lies the core of the dispute: how clear the PSC is in regard to linking production targets to cost recovery. RIL wants to arbitrate the Minimum Work Programme stipulated in the PSC for four blocks relinquished by the firm. "The firm has been advised that the government cannot deny cost recovery for any element of contract costs on the ground that the levels of production mentioned in the develop- ment plan were not being achieved. The company is following the required procedure for progressing the arbitrations," RIL's annual report says.