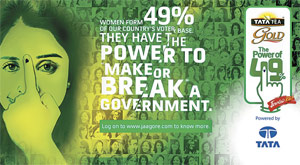 08 November, 2014
Print this article Font size -16+
When all else fails, advertisers tend to bet on three sure-fire sellers — cricket, religion and sex. Now, they seem to have added one more formula to the list — elections. Given the mass interest the 2014 polls have evoked, a host of brands are riding piggyback on elections by creating campaigns urging people to vote. There is Idea with its ullu banoing ad, ITC Sunfeast with its election-themed ad, Google’s video on India’s oldest voter, Tata Global Beverages’ power of 49 ad, and the Hero ad.

Also, watch the regional news channels for a whole bunch of brands with election-themed ads, including some from real estate companies asking you to get inked and get a discount! Says brand strategist Harish Bijoor, “Advertising during elections is moving from the sublime to the ridiculous. The marketer is a salivating animal — he salivates at every opportunity. Unfortunately, he goes and kills the golden goose by overdoing things.”

Terming the Hero ad an inane piece of advertising, Bijoor says a lot of people have tried to milk the election opportunity but, instead, have bled it. Bijoor points out that during elections, TV is dominated by election news, but when advertising becomes all about elections, it just adds to the clutter. It does not create any standalone value. When the intent is very short term, the payoff is also likely to be short term.

Unless, like Tata Global Beverages Jaagore ad, there is a consistency built into the poll pitch, and it is part of the branding philosophy.