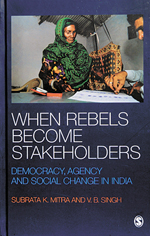 Despite the man on the street's palpable apathy to politicians and politics, the 2009 general elections managed to convince even the worst sceptics that democracy is alive and kicking. This surprise event of a political party being convincingly elected to power has been followed by a thank-you budget at the Centre. This has apparently achieved the impossible task of supporting the interests of peasants, owners, reformers, entrepreneurs, bureaucrats, workers — all at the same time! What constitutes this new pragmatism? Is there, like, a new undercurrent of social revolution?

Cynics asking such questions should read this book. It tries to find the key to India's enduring changes among its people. Drawing on the empirical base of three national surveys of the Indian electorate — in 1971, 1996 and 2004 — by the Centre for the Study of Developing Societies, the authors seek to fill this gap, and examine the new social elite that is increasingly serving as votaries and catalysts of orderly, participatory and democratic social change.

The book says India's two-track political process, which combines institutional participation with rational protest, has succeeded in turning rebels into statesmen, with abiding trust in democracy, institutions (mostly in the Election Commission) and negotiations as a dispute resolution process. The authors must get full marks for trying their best for a remarkably comprehensive exposition of the complexity of Indian democracy from the CSDS survey findings. But one must also say that it is probably too soon for a general theory of democratic social change a la India.