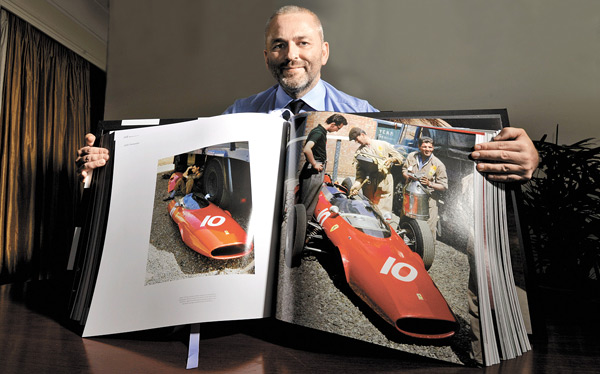 08 November, 2014
Print this article Font size -16+
Imagine a book heavy enough to build muscles with, big enough to be not just a coffee table tome but almost a coffee table and filled with over 2,000 photographs of some of the fastest and sleekest machines ever made. Sounds like a dream come true for bookworms and car lovers alike?
At half a meter square, 852-pages-long and weighing 37 kilos, this magnum opus referred simply to as the Formula 1 Opus is said to be the biggest and heaviest publication ever to be created on Formula One racing. If you consider yourself an expert on the sport and think you know all there is to know, the book will still pleasantly surprise you. Nearly 50 per cent of the content has been exclusively commissioned for the book, including some rare pictures clicked by both professional and amateur lensmen.
The team went through almost a million pictures to shortlist the 2,000, says Karl Fowler, the CEO and founder of Opus Media, a luxury publication house based in the UK. “There’s something magical about a still photograph that can capture the soul of the moment,” says Fowler whose love for books (he is an avid collector of first editions) and the desire to tell a tale at a grand scale had him quit his job at Morgan Stanley and set up Opus in 2005.
There are pictures clicked by a retired school teacher who used to go to the F1 in the 1960s as an amateur photographer. In those days, there wasn’t any security and he got up close to champion drivers. The book features the pictures he had clicked but never developed. He had sent the entire film to Opus. “On developing it, we came across some real gems,” says Fowler.
What makes the Official Formula1 Opus, which has been in the making for over six years, extra special is that it was written in collaboration with Bernie Ecclestone, the CEO of F1. As a result, the Opus team had access to documents, pictures and locations like never before. The result: a collection of stories and imagery on not only the history of the sport but also the people who make the sport the religion that it is today.
Sample this: Opus got all the living F1 world champion drivers to the Silverstone Circuit for a photoshoot and over two days clicked their portraits that became a part of the book.
The book is hand-bound with each copy taking almost a week to hand stitch. It is available in two editions — The Champions Edition (£20,000) and The Classic Edition (£2,000). While there are only a 100 copies of the Champions Editions worldwide — making it a collector’s item, only a few of them will be available for the Indian market making them even more precious.
The Champions Edition has a signature page which is hand signed by every living world champion driver. “It took us over two years to just get the signatures,” claims Fowler. That page alone is valued at  £15,000 for insurance purposes, justifying the value of the book. The Classic Edition has 2,000 copies worldwide of which around 200 will be sold in the Indian market.
(This story was published in Businessworld Issue Dated 12-11-2012)
Tags assigned to this article:
magazine book review uk sports profile luxury books coffee table books smita tripathi bwbooks7list sanjay sakaria magazine 12 november 2012 formula1 opus karl fowler fi