The Old Kings... And The New 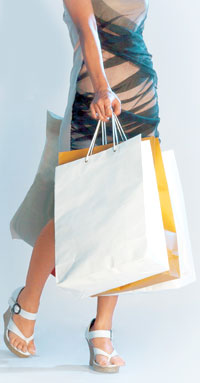 2000s
The Mall Bug
Suburbs in Delhi and Mumbai saw multiple malls of average size 250,000 sq. ft spring up. Tier-2 cities followed suit and retail-only real estate companies came up. About 600 malls were to come up by the end of the decade, from 20 in 2004. The retail formats, too, underwent big changes.

A Refreshing Sip
In a country where everyone drank tea, it was a revolutionary development. Bangalore-based coffee planters and exporters Amalgamated Bean Coffee developed a chain of cafés across the country — Café Coffee Day. It brought specialty coffee blends to the mass market. And young India flocked to the coffee shop.

2001
Second-Movers
Competition began in full earnest. While it took Shoppers Stop over eight years to become one of the largest department store chains in India, Westside grew to about half its size within just two years of starting off. The
differences did not end there. While almost 75 per cent of Shoppers Stop sales came from brands supplied by other producers, 95 per cent of Westside's sales came from its own in-store brands.

Bigger Bazaar
Finally, India had its own hypermarket. On 27 June, the RPG group opened its hypermarket, Giant, in Hyderabad. By the end of the first day, the store had 12,000 visitors, and notched up sales of Rs 30 lakh. It was thus reckoned that RPG had gained a first-mover advantage and a pre-emptive strategy against global players.

Dark Horse
India's new biggest retailer had arrived. When Kishore Biyani announced the results of his company, Pantaloon Retail, for 2003-04, his topline was about Rs 650 crore — a clear Rs 100 crore more than RPG's, the second largest player in the Indian market then. Shoppers Stop was in the third position with revenues of Rs 400 crore.

2005
More Of The Same
Urban organised retail was getting crowded. To be different, a few specialty malls cropped up. While some focused on luxury brands, others went for gold, jewellery, furniture, and even weddings.  But these were just a minuscule part of the big pie.

2007
Green Evolution
The biggest names in corporate India — Reliance Industries (RIL), Aditya Birla Group, the Mittals of telecom fame, Pantaloon Retail and RPG Group — as well as a host of smaller players jumped into retailing of fresh vegetables, fruits and groceries. And with good reason. Of the retail pie that was worth Rs 12 lakh crore in 2006, 63 per cent was food and groceries alone.

2009
Shutters Down
Retail had many players but it was not everyone's cup of tea. Chennai-based value retailer Subhiksha Trading Services, went neck-deep in Rs 600 crore of debt (plus Rs 180 crore raised internally as shareholders' funds). It could not pay vendors, and employees. By 2009, it had no money to run its operations, senior staff was deserting, many stores were reportedly looted, and there was a demand for the government to initiate an independent audit of its accounts.

2010
Foreign Hand
Big retail was at the doorstep, waiting for the still elusive green signal to foreign investment. Two years after it entered India, in partnership with Bharti, Walmart was perfecting its back-end system at its five stores in India (three in Punjab, and one each in Rajasthan and Madhya Pradesh). The rules allowed Walmart only to operate in the cash-and-carry segment. But in every other country, it sold directly to consumers. It had plans to invest Rs 500 crore more in the next five years to open 12 similar stores — if the retail FDI rules did not change that is. And change they did.

2011
The Gates Open
The government has now given its nod to increased FDI in retail — 51 per cent in multi-brand, and 100 per cent in single-brand retail. Easier said than done. Political consensus is missing. As we go to press, Parliament has been stalled on the issue for the seventh day.