The Nub Of The Matter 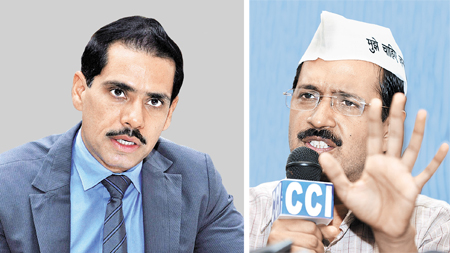 08 November, 2014
Print this article Font size -16+
Last week, India Against Corruption leader Arvind Kejriwal held a press conference accusing real estate giant DLF of showing undue favours and giving unsecured loans to Robert Vadra, whose chief claim to fame is that he is Sonia Gandhi’s son-in-law. Kejriwal also exhorted the government to set up an investigation into the DLF-Vadra dealings. The Congress party’s reaction to Kejriwal’s accusations was quite confused. Some Congress leaders and ministers said there was nothing to investigate as it was a dealing between two private parties — DLF and Vadra’s companies. Others attacked Kejriwal. DLF and Vadra also came out with denials, but did not provide enough details to clarify exactly what their dealings were. Meanwhile, at an event, Prime Minister Manmohan Singh gave a speech giving contradictory signals. At one point he said that private sector can be punished if found to be encouraging corruption. At another point, he said that excessive negativism and pessimism about corruption served no purpose.

The Prime Minister and the rest of his ministers need to get their priorities right. For one, if there is excessive negativism about corruption today, it is because the country has been rocked by corruption scandals — the 2G licence case, the Adarsh scam, the Commonwealth Games frauds, the mining scams, Coalgate and other assorted cases of humungous amounts of money being siphoned off. Add all the sums involved, and you end up with a staggering amount of money. Most of these  cases and scams have involved Congress party members or their allies. The PM is serving no one’s purpose by trying to downplay the issue.

Equally importantly, if the PM believes that the private sector has a role in perpetuating corruption in the country, he should also have asked one of the investigating agencies to enquire into the Robert Vadra-DLF affair.

Kejriwal’s accusations may well be found to be untrue, but no one has been able to explain, so far, how Vadra acquired so many assets in so short a time. The exact nature of business he is in has always been shrouded in mystery. And that alone should be enough reason for mounting an investigation.