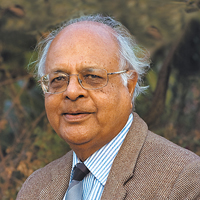 08 November, 2014
Print this article Font size -16+
The Commonwealth Games have been a godsend for the media; they have never been presented with so much dirty linen to wash in such a short time. I am happy with the games for two other reasons. First, they were preceded by enormous investment in Delhi's infrastructure: roads have been widened, crossings redesigned, and the roadside beautified. Delhi was always one of India's best cities to live in; now it is even better. And second, the games got such bad advance publicity that many people just left the city. As a result, traffic was lighter, and the city less crowded, at least while the games lasted. I cannot continue on this topic without joining the washermen, so let me go on to a related topic — the London Olympics of 2012.

The Thames River is not very deep; it could not take East Indiamen — the big sailing ships of 800-1200 tons that traded with the east. So their cargo was unloaded into barges at the mouth of the river and taken upriver to various wharves. It was a great attraction for pirates, who preyed on the barges. The trade was booming; the number of East Indiamen returning was 27 in 1792, 33 in 1793, 42 in 1794 and 63 in 1796.

The logistics of unloading the ships, taking the barges to wharves, getting the goods past the customs and sending them across the country were getting too complicated. So the trading companies worked out a solution: they decided to build docks at the mouth of the river. The ships would be unloaded there and the cargo would be transported from there by road. There were three of these docks — East India docks, West India Docks and London Docks. All three were built on the north bank of the river, east of the City, in the first decade of the 19th century.

Once India became independent in 1947, trade with Britain began to decline. East India Docks lost business, and were finally closed down in 1967. Their ruins have been standing till now. An area of one square mile comprising them was given in 2007 to a newly created private company called LOCOG — Local Organizing Committee for Olympic Games and Paraolympic Games. Its budget is 2 billion Pounds; except for a small contribution from the International Olympic Committee and sale of tickets and memorabilia, it will raise the money from corporate sponsorships.

The London Olympics are scheduled for 29 July-12 August 2012. The planning for them began a year before the Peking Olympics. A plan was made setting milestones to be achieved by different dates. Before the Peking Olympics, all architectural plans had to be ready, and all digging and demolition was to be completed. Then by 27 July 2009, the foundations of all buildings were to be completed. By 27 July 2010, the external structures of all big buildings had to be ready.

By 6 August this year, the Olympic Stadium's roof cover was completed and 2012th seat fitted. The structures of the baseball and basketball stadia and the press centre were in place. The roof of the aquatics centre was up, and the pool had been dug, lined and tested. The velodrome was fitted with a watertight roof. Stratford railway station was being improved to handle the traffic, and 19 live sites with big screens and event spaces had been set up across the country. Five of the 11 residential blocks were ready.

Since the land belongs to various government bodies, a separate public authority called the Olympic Development Authority has been created to take it over. It will get 2.2 billion Pounds from National Lottery; once the land has been developed and sold, National Lottery will share in the profits. Unlike the Indian Commonwealth Games Authority which was given government funds, the ODA and LOCOG will have to convince their financiers about the viability of their plans. They have already lined up 34 big companies as partners, including Arcelor Mittal, McDonalds and Coca Cola.

The games authorities plan to recruit 70,000 young men and women, between 16 and 19 years. They will have to make themselves available for at least 10 days (20 if they work for the paralympic games too). They will have to work 8-10 hours a day, and will get nothing beyond free meals and transport. They will not get free tickets, or leave to attend events of their choice. And yet the authorities expect to receive ten times as many applications as they need.

This is how the British are going about preparing for the Olympics. It is not rocket science; it is just good planning. It is a pity that we did not learn that much from them in 150 years of being their colony.