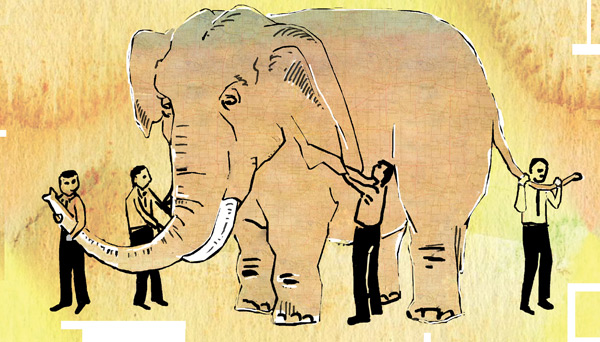 
Also, modern trade has brought along with it wide choice. That, coupled with consumers' inclination to buy newer product formats, paying a premium where they see value, has changed the playing field.

Digital Dimension
With the onset of digital, there is more change in the offing than anyone bargained for. "The most notable change over the past 10 years is the speed and depth of information access," says Tim Love, vice-chairman of Omnicom Group, the world's second-largest advertising network. His reference is to a post-digital world of 7 billion people, with 5.6 billion individuals connected by mobile phone — half of them connecting to the worldwide web without a laptop, desktop or landline.

According to Love, this makes people (or consumers) the first media today and word-of- mouth the most persuasive method of marketing. "In future, the fundamentals of basic marketing will shift towards closer interaction and iterative-marketing development with consumers, potential triers and with loyal advocates," he says.

The digital revolution has also altered the basis of advertising. As Sam Balsara, chairman and managing director of communications services agency Madison World says, "Conventionally, advertising was always looked upon as one-to-many, with the advertiser talking, if not talking down, to his subjects or prospective and current customers." Therefore, the agency used all kinds of tricks in its armoury to attract attention. With the advent of digital, communication got the power of interactivity and the entire premise of one-to-many communication has been hit for a six.

Bindu Sethi, chief strategy officer, JWT India, feels that while Indian advertising has always been familiar with starting conversations and interacting with consumers, what has changed is the speed of interactivity. "In the early days of radio advertising, there was interactivity where listeners used to write letters. Radio was the challenge in the old days. Then Binaca Geet Mala and Bournvita quiz contest were not commercials, but activations and we still remember them. You always get new tools, new ways of starting a conversation," says Sethi.

But as Sethi accepts, marketers and advertising agencies have to grapple with the speed of the digital medium. "It is about understanding the digital media as human beings rather than as techies. Of course, you should understand the technology, but after that you should get back to how consumers relate to it and thus maximise it. Therefore, the shift from formats that you are comfortable with to formats that are new and challenging," she says.

MDI's Arora agrees that the marketer today is no longer the key puppeteer who holds all the strings. "Even while it was being said that marketing should be customer-oriented, the fact is that the marketer had all the information in the past. But today, there is a horizontal flow of information," he says. As Arora explains, when customers want to buy a new product, particularly big-ticket items, what they did earlier was to scan showrooms or ask around in a trusted circle of friends. If they approached official marketing channels, the marketer controlled how much information he could disclose.

But now there is whole lot of communication between a potential customer and other existing customers. The first thing that many customers do is to scan the Internet for product opinions or ask their large network of friends through the social media. "The processes that a consumer went through to arrive at a decision have all collapsed," agrees Sethi.

break-page-break
Consumer Activism
It is not just exaggerated product claims that face the danger of being exposed, but now, other information that consumers were never privy to in the past, is also made accessible online. For instance, did consumers ever bother about whether the palm oil used in their snacks came from sustainable farming practices, or from a farm that was depleting the rain forests? Earlier, this was something that the marketer could have isolated his function from by passing on the burden to the manufacturing or sourcing department. Arora says, "This cross-customer communication is changing the scene drastically. It creates difficulties operationally as the truth about the product is now discussed by the people who have experienced it themselves."

With products that can potentially cause harm to the environment raising the hackles of online activists and, subsequently, those of the consumers, now marketers are being forced to make such disclosures, or to certify that their products' manufacturing employs sustainable practices. "In our marketing conversation, our consumers want us to become more authentic and more honest," says Bakshi. Over a period of time, brands that have a purpose, talk about a sustainable environment and do things in the right way will become more and more important. Earlier, consumers did not know what was going on. Today consumers have a point of view that they are willing to share.


Hindustan Unilever, for instance, is aiming for 100 per cent of its sourcing of agro produce to be from sustainable sources by 2020. At present, 60 per cent of tomatoes used in Kissan ketchup is sourced sustainably, according to point-of-purchase displays.

Experts such as Silicon Valley's legendary technology marketer Regis McKenna advocate moving from the concept of ‘time to market' to ‘time to acceptance', a concept that essentially means integrating marketing with design and manufacturing. That is done by involving marketing not at the end of the production cycle but right at the beginning. It also means bringing in potential customers as early as possible into the development process. Even if it does not result in the co-creation of a product, it could at least bring in critical consumer insights. For instance, recently 91Mobiles, an Indian mobile retailer, orchestrated a Twitter trend on what could be the best feature on a mobile phone. That information could be key to someone developing a new handset.

"Today, the belief is that advertising has to become story-telling. You must spend as much time talking to consumers as listening to them. Earlier, there was only one side that was doing the talking. This is a completely new paradigm. It is going to take some time for large advertisers and advertising agencies to not just recognise this phenomenon but also to find a structured way to address this challenge and opportunity in a scalable and cost-effective manner," says Balsara.
But while going the whole hog in digital, veterans like Ries sound a crucial warning. He says that too many companies spend all of their time working on digital tactics and forget the need to first develop a good strategy.

It is crucial to remember that today the consumer is a multi-tasker. That behaviour spills into the overall consumption habits of media content, which according to advertising agency Publicis South Asia's CEO Nakul Chopra "has dramatically changed in the last few years". If you look at how consumers use a personal computer, "now it's not just multiple windows but also multiple screens. The trend of multiple screens and your attention being on multiple things is a socio-cultural phenomena. The power of an idea to jump those screens and to embrace you, whichever screen you are on, is what we call magic," says Chopra.

We say, let the magic begin.