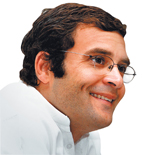 ho: Rahul Gandhi, Congress party
Why: For remaining India’s great political hope
From his inspiring Budget speech, where he pleaded for quality education for all, to spending nights at Dalit homes, Gandhi made all the right moves. His unorthodox approach to politics — like his late father Rajiv — is beginning to pay off, with the Congress doing unexpectedly well in UP.

Who: R. Subramanian, Subhiksha
Why: For going bankrupt
He had the confidence to spell out expansion plans till end-2008, despite being in dire straits. The retailer never generated enough cash to service its debt — around Rs 750 crore. The company had fights with its bankers, and a corporate debt restructuring exercise also did not work out.

Who: B. Ramalinga Raju, Satyam
Why: For perpetrating India’s biggest corporate fraud
Year 2009 began with the equivalent of a corporate bomb explosion, when Satyam Computer’s founder B. Ramalinga Raju admitted to cooking the company’s books. The company was finally sold to Mumbai-based Tech Mahindra after being run by a government-appointed board for a few months. Both Raju and his brother Rama Raju are in jail as investigations continue.

Who: Nandan Nilekani, UID
Why: For heading the UID project
When Nilekani, co-chairman of Infosys, was appointed head of the Unique Identification Authority of India (UID) project, it signalled the government’s willingness to tap into the private sector for heading challenging projects. The UID aims to provide a unique identification number to every adult Indian, and will start issuing them in February 2011.

Who: Anand Mahindra, Mahindra & Mahindra
Why: For buying Satyam, launching Xylo and Gio
The photogenic Mahindra was the darling of the IT crowd this year. M&M’s IT subsidiary Tech Mahindra bought Satyam for Rs 2,900 crore, giving the company and its employees a fresh lease of life. M&M also launched SUV Xylo and ‘compact truck’ Gio this year.

Who: Vijay Mallya, UB Group
Why: For misplaced priorities
The Belgian Grand Prix saw the coming of age of Vijay Mallya-owned Force India, as it had a podium finish after 30 races. Mallya’s airline business, however, struggled through the year, prompting talk about his priorities. In December, his flagship beer maker United Breweries tied up with Dutch giant Heineken to cross-sell their products in different countries.

Who: Venkataraman Ramakrishnan, scientist
Why: For winning the Nobel Prize for Chemistry
When a molecular biologist, who holds a PhD in physics, wins the Nobel Prize for chemistry, you get an idea of the ‘convergence’ in the realms of scientific research. Ramakrishnan won the award along with two others for mapping the positions of the hundreds of thousands of atoms that make up the ribosome, the builder of proteins.

Who: Jairam Ramesh, environment and forests minister
Why: For the enviro-nment flip-flop
The minister’s ‘confidential’ letter to the Prime Minister, which called for a change in India’s long-standing position on climate change talks, drew immense flak. Ramesh changed his stance the very next day, but controversy continued
to dog him, especially for announcing self-imposed carbon intensity cuts.

Who: Sunil Mittal, Bharti Airtel
Why: For dreams unrealised
It was a case of so near, yet so far for the telecom czar. Mittal, who always wanted Bharti to be a global telecom powerhouse, missed the bus by a whisker when he failed to seal a deal with South Africa’s MTN. The combined entity would have been the world’s third-largest telco. Mittal will now have to wait for his next shot at global glory.

Who: Ratan Tata, Tata Group
Why: For launching Nano
Derided by experts and commoners alike, the Tata Group chairman’s perseverance was vindicated when he handed over the keys of the first Nano to Mumbai’s Ashok Raghunath Vichare this July. Later, he engineered a refinancing exercise for loans taken to buy luxury car maker Jaguar Land Rover. In November, Tata said his successor could even be an expat.

Who: Mukesh and Anil Ambani, RIL and R-ADAG
Why: For their K-G Basin fight
India’s most widely publicised sibling rivalry continued unabated, now in the hallowed portals of the Supreme Court. The Bombay High Court had earlier ruled in favour of Anil’s Reliance Natural Resources contention that Mukesh’s Reliance Industries supply gas at $2.34 per unit for 17 years. RIL had said it could supply only at $4.02 per unit.

Who: A. Raja, telecom minister
Why: For the telecom imbroglio
Raja’s ministry got into a controversy when the CBI raided it to probe allega-tions of wrongdoing in a controversial spectrum allocation. New telecom licences and associated wireless spectrum were issued at prices that had been used several years ago. Raja managed to ride out the storm, though, and in December, announced that 3G spectrum auctions would be held “as per schedule” on 14 January 2010.

Who: Prannoy Roy, NDTV
Why: For making NDTV debt-free
The telegenic Roy can no longer be accused of being a good journalist, but a bad businessman. Besieged by teething financial troubles, Roy sold 76 per cent indirect stake in entertainment channel NDTV Imagine to Turner Asia Pacific Ventures. Roy has effectively cleaned up the debt on NDTV’s balance sheet. He is clearly focusing on news for the moment.

Who: Sanjay Jha, Motorola
Why: For reinventing the cellphone pioneer
Motorola has lost so much in sales and market share that it almost doesn’t count any more. But new co-CEO Sanjay Jha is out to change things. This year, it launched two smartphones, Dext and Milestone, to good reviews and initial sales. Both phones are based on Google’s Android operating system. Next year could see some Linux-based smartphones.

Who: K. Chandrashekar Rao, politician
Why: For Telangana
The TRS chief’s fast-unto-death paid rich dividends after 11 days, when the Centre ceded to his demand for the creation of Telangana state. Soon after, though, Andhra Pradesh, which has to be carved up to create Telangana, erupted in a volley of protests and violence. The issue is yet to see a resolution, with the Centre now wavering.

Who: Steve Jobs, Apple
Why: For his illness
For technology company Apple Inc., Steve Jobs is perhaps a bigger brand than any of its products. So, rumours of a mystery illness that might cause Jobs to quit Apple — or, worse, take his life — caused panic. But Jobs assuaged fears in January, explaining he had a hormone problem and treatment had begun. After going on a six-month leave, Jobs returned to work in July, albeit part time.

Who: Ben Bernanke, US Federal Reserve
Why: For managing the financial crisis
The world’s most powerful man? Barack Obama, certainly, but Ben Bernanke ran him close in 2009. As the US financial system tottered, the Fed chairman responded like a cornered tiger, frantically shovelling money into the system. The big bailouts made him unpopular, but did save the day.

Who: Sultan Ahmed Bin Sulayem, Dubai World
Why: For giving the world a scare
The global financial world went into a tizzy when Dubai World, the conglomerate that accounts for a bulk of Dubai’s $80-billion debt burden, and of which Sulayem is chairman, announced in November that it was freezing payments of its debts till May 2010. Stockmarkets crashed world over, triggering fears of another financial crisis.

Who: Kenneth D. Lewis, Bank of America
Why: For being hounded
Trying to save a drowning company almost cost BoA its own existence. CEO Lewis was severely criticised after BoA bought a sinking Merrill Lynch for $50 billion, and then itself needed a $45-billion bailout. Lewis, who will retire by year-end, can leave a little happier, with BoA saying that it is now in a position to repay the government.

Who: Wen Jiabao, Chinese Premier
Why: For China’s growing clout
The unipolar world exists no more, with China unmistakably emerging as the second big power. It even influences the US economy through its purchases of US government securities. At the climate talks in Copenhagen, Wen insisted on not allowing external checks of emission targets. Developing nations can now self-report every two years.(This story was published in Businessworld Issue Dated 04-01-2010)
Tags assigned to this article:
magazine newsmakers what to expect in 2010