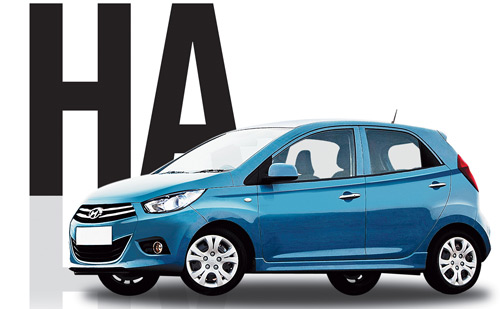 Importantly, the HA will skip the ultra-low cost car market of Tata Nano and will be positioned between Nano and hatchbacks such as Wagon R, Santro, Beat, etc. It has also learnt from the mistakes of Nano — wrong target audience, improper marketing and distribution, and quirky product design. "Auto makers have understood that the Indian consumer wants a good looking, friendly-on-the-pocket vehicle, and not a low-cost car," says Kapil Arora, head of the automobile practice at Ernst & Young.

From Small To Smaller
Though Hyundai has not revealed specific details of HA, it is understood that besides the three-cylinder, 800-cc petrol engine (Alto has a four-cylinder 800-cc petrol engine and the Nano has a two-cylinder 623-cc petrol engine), a 1,000-cc diesel engine variant will be introduced by 2013. The aim is to compete in the Alto segment, but offer a higher style-quotient and gadgets. For instance, all models except the base model of HA may have power steering. Only the top-end Alto model has this feature (optional for mid-level model).

"We need to move into smaller cities for volume," says Saxena. Company sources say over the past five years, car sales in Tier-3 towns has increased from 11 per cent to 30 per cent. "It is important that we create a network that aligns with our volumes strategy for the next five years," adds Saxena. Hyundai, though, is moving slowly — by this year-end, it will add 20 dealers to the 320 it already has. Of these, 4-5 will be in Tier-3 towns. The number of access points will go up to over 2,000 from 1,500. But this will still be much lower than Maruti Suzuki's 810 dealerships and 2,700 service points. "They need dealers across India to sell the small car and by virtue of being the second largest in the market, they can ramp up," says Hormazd Sorabjee, editor of Autocar India. He adds that Hyundai has built a brand name over the past 15 years, and is well placed to meet distribution challenges.

Placed Right
Though the HA will not compete in the ultra-low-cost car market, it will still have to be priced competitively. Industry sources believe HA could be priced in the Rs 2.1-2.4 lakh range, and the diesel variant about a lakh more. Alto petrol costs Rs 2.3-3.4 lakh (Alto does not have a diesel variant).

Meanwhile, Alto itself is going through a revamp. Maruti is developing a 600-cc petrol engine codenamed YE3. The cars it powers may be priced in the Rs 1.75-2.75 lakh range. HA also has to contend with the Nano diesel — considered to be the killer from the Tata stable. Expected next year, it may cost less than Rs 3 lakh.

The other rivals are Chevrolet Beat diesel (Rs 4.3 lakh) and 1.4-litre Ford Figo (Rs 3.4-4 lakh). Maruti Suzuki could also surprise, perhaps with a diesel Alto. But HA's low pricing could well make it the cheapest car after Nano.

"We delayed manufacturing our diesel engines locally because none of us expected the price differential between petrol and diesel to be so high," says Saxena. The company is investing Rs 400 crore on a new diesel plant and the first engine will be on-road by mid-2013. "It will be critical to manufacture their diesel engines soon because the American cars could have a two-year advantage," says Shrawan Raja, managing editor of indianautosblog.com. He adds that HA's petrol engine could be taken from Santro's four-cylinder engine.

Hyundai is also keen on bringing its own 1.13-cylinder U-engine to fit the small car as Maruti Suzuki is yet to launch a low-displacement diesel car in the Alto series. "Currently, we work on Fiat engines, but globally we have options for low displacement engines that can be brought into India," says I.V. Rao, executive director of Maruti Suzuki in Delhi.

Apart from Maruti Suzuki, Hyundai also has to watch out for Toyota and Volkswagen. Over the past six months, Toyota's sales have risen 94 per cent over 2010-11, while Volkswagen's sales have grown over 100 per cent over the last year. Both have also invested heavily to ramp up production. Hyundai, meanwhile, is watching its India operations closely as it accounts for 8 per cent of its 3.6 million global sales. Between India and China, Hyundai manufactures 1.3 million vehicles. And if these numbers have to grow, HA will have to be the pivot that it has been searching for in its India journey.