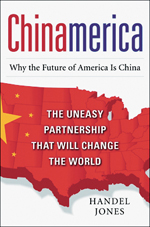 Raging now is a blitzkrieg of books on china's race to become the global economic superpower. Several of these books forecast an ensuing political and economic battle between the US and China. Given that economic supremacy leads to political hegemony such concerns stand somewhat justified. But leading market analyst Hendel Jones contradicts this popular wisdom in his curiously titled ChinAmerica. Armed with a comprehensive analysis of global trade and the two economies, the book delineates the whys and hows of a future of collaboration between these superpowers. Jones goes past common focal points of cooperation to find out what is there for both countries to learn from each other.

Jones reveals a grim picture of the US economy and policy making. Lowest GDP growth rate, trade and fiscal deficits and weakening of the currency are gnawing off the world's powerful nation. Faulty policy making, growing consumerism, greed, and debased work ethics are a few other concerns. A slightly embittered Jones compares the US with a withered old oak caught in storm. He says the US is now experiencing what had happened to the UK and the rest of Europe post World War II.

The comparisons are hilarious. If the US is the "weakening giant", China is the "growing giant". China's double-digit GDP growth for the past 20 years is unthinkable for any other nation. Employment rate is also growing high. So, what have contributed to this phenomenal, enviable success? To answer this, Jones analyses a slew of things; China's culture, history, people, demographics, life style, philosophy, policies and guidance, geographical features, family ties, social security system, business tactics, etc.

Jones comes up with a worthful discovery on areas where the Chinese excels and the Americans weaken. He believes that by adapting and imitating the Chinese example, the US can sustain its growth and maintain its leadership. They include distribution of wealth in the society, five-year plans, protectionist measures, visionary leadership, greater access to raw material, and efficient infrastructure, among others.

Jones rejects many of the contentions of the messiahs of globalisation. He says, "There has to be a new philosophy that balances the relationships between capitalism and socialism. The new approach should be based on one key metric: the growth of the wealth of the country over an extended time frame."

In the end though, one cannot help but think the book is more about the need of the US to strengthen its competitiveness than about a partnership of the two titans. Yes, the book is no drab business literature. It's a welcome addition to the raging blitzkrieg of books.