The Moving Bar Of Poverty Statistics 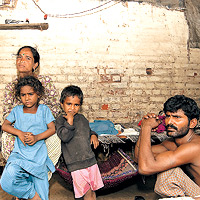 Ahead of the much-awaited Suresh Tendulkar committee report on poverty estimation, another committee appointed by the rural development ministry has come out with its report. The committee, headed by N.C. Saxena, says that the percentage of rural population below the poverty line (BPL) could be as high as 50 per cent — the current estimate is 28.3 per cent.

The Saxena committee has come under fire for putting out such numbers. The Planning Commission has said the matter of fixing the percentage of BPL is "beyond the scope of the present committee and is being handled by a separate committee". The Saxena committee says that the basis of Rs 365 per capita per month in rural area and Rs 539 per capita in urban areas resulted in people consuming "just about 1,820 kcalories (kcal)" of food as against the norm of 2,400-2,100 kcal (rural-urban). To achieve this, the "cut off line for determining BPL status should have been Rs 700 in rural areas and Rs 1,000 in urban areas".

The rural development ministry has done three exercises to estimate poverty level over the past 17 years. But this time round, the Planning Commission has put its foot down and has said that fixing the rural poverty level at 50 per cent "will be considered arbitrary" and that such a recommendation would have "tremendous financial implications and once granted cannot be reduced". The final word: wait for the Tendulkar committee report.