The Movers In Packers 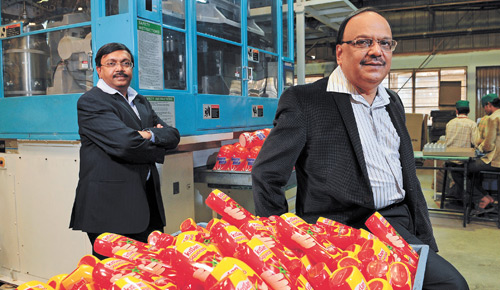 
Take, for example, tea. Tea companies have experimented with pack sizes for two decades in their effort to reach different economic strata of society. Earlier, tea was sold in tin boxes; then came smaller-size paper packages. Now, tea companies are moving to PET jars in a big way. "There is restriction in use of disposable plastics in the flexible packaging side of the business, so we are experimenting with smaller PET jars or rigid packs," says E. Krishnakumar, general manager of materials, Asia, at Tata Tea. He says that the whole game in the packaging industry had shifted from a pack being just a skeleton to how it can increase the shelf life of a product as well as help the brand reach out to the customer. This is where multilayer laminates and PET jars are seeing demand and innovation.

Multilayer Growth
"Consumer sentiment in India is high and in every growing economy packaging will grow too," says Kanvaljit Singh, managing director of Helion Advisors, the advisory arm of Helion Venture Fund, in Bangalore.

"Capacities will increase in the next five years and home-grown companies will stand to benefit from consumer demand," adds K.L. Mundra, managing director of Mumbai-based Sunrise Industries, which manufactures PET jars for the oil industry and is close to touching Rs 200 crore in 2011. He adds that the entry of many foreign packaging majors such as the UK-based Rexam and Sweden-based Tetra Pak into India through joint ventures or independently, further reflects the possibilities of the sector.

According to some analyst estimates, the Rs 75,000-crore packaging industry is expected to grow by 15 per cent every year for the next five years. While this is significant, the industry still has a long way to go. When compared with China's capacity of 3 million metric tonnes per annum, India's total installed capacity is only about 10 per cent of that.

Besides FMCG, rigid packaging as an industry has witnessed growth because of beverage manufacturers such as Coca-Cola and PepsiCo. Analysts say the average annual consumption of cola per person in India is currently 8 litres; but cola majors have plans to increase this to 20 litres. "In countries such as Pakistan, the average consumption is 60 litres per annum," says Ankit  Kedia, director of Manjushree Technopack. As consumption of cola increases, so will the demand for PET bottles.

However, not everyone is depending on the plastic-based business for growth. Delhi-based Hindustan Tin Works (HTW) was started after acquiring an old subsidiary of a former Indian manufacturing major called Zenith Tins in the early 1980s. While tin-based packaging lost its sheen two decades ago, it is back in vogue thanks to cola majors, food majors and sports companies. Many watches, for example, are now packed in tin boxes, as are liquor bottles. "When the recession hit, many companies from the developed markets came to the developing world to get their packaging material," explains Atit Bhatia, senior vice-president of Hindustan Tin Works, whose sales have grown about 17 per cent in one year to reach Rs 284 crore in FY10 from Rs 244 crore. Of this, about 16 per cent came from exports, which grew 20 per cent since FY09 to Rs 44.37 crore.

Well aware of not only the growth opportunity but also the competition, HTW tied up with packaging major Rexam in 2006 and has set up a plant in Panvel, Maharashtra. The  company plans to invest Rs 40 crore to expand its capacity from 20,000 tonnes to 25,000 tonnes per annum this year.

While the Indian packaging industry may be preparing for big things with the growth of the food, beverage and FMCG industry, the bigger challenge, however, is to work out its raw material costs as crude prices are eating into the industry's traditionally low margins.

Input Strains
The bulk of the packaging business is crucially dependent on crude prices. With crude prices increasing every week and the oil companies passing on the hike, the packaging industry has been dealt a double blow. As the net margins in the industry are low, just 6 per cent sometimes, the packaging companies have to keep a close watch on pricing and find ways to increase revenue. "This industry needs to scale up and manage the costs by delivering large orders to increase its bottom line," says Paras Adenwala, managing director of investment advisory Capital Portfolio Advisors. He adds that only the firms that have spread their risks across the FMCG industry and are not dependent on just one or two companies for their orders will be able to grow to leadership positions.

As of now, the industry as a whole enjoys a low debt-equity ratio — for instance, companies such as Manjushree Technopack, Uma Polymers and Sunrise have debt-equity ratios below 1.0. However, these companies will need to expand using debt to raise funds and will have to manage their input costs effectively if their net margins have to increase.

With even large and well-established packaging companies such as Uflex, Pearl Polymers and Futura Polyesters coming under margin pressures due to rising crude costs, many companies are looking at new business models to survive. Many are getting into the pre-forms business, where they just manufacture small plastic tubes and ship them in bulk to the client company. "The business of pre-forms works only when the raw material cost is off the books of the packaging companies," explains Donald Francis, analyst at Valuepickr, a consultancy in Bangalore. This new business model transfers the risk of buying the raw material — polymers — to the client. Companies that have adopted this strategy have already earned higher net margins, which are expected to grow to 12 per cent.

Another way to offset the high input costs, some say, is to organise the highly fractured packaging industry, where disorganised players rule 80 per cent of the market and the organised packaging business is only around Rs 15,000 crore.
"The problem with the industry is that since 80 per cent of the business is not organised, large companies work with disorganised players to save on costs," laments Shailesh Seth, who started his flexible packaging company Krish Flexipack in the mid 1980s after being a trader for many years. The Mumbai-based company has grown to over Rs 200 crore in 25 years and Seth plans to invest Rs 100 crore more to increase capacity by 50 per cent from the current level of 25,000 tonnes per annum.

On a larger scale, adds Seth, until the Indian middle class — which is estimated to include 300 million people — starts accepting quality packaging as a value creator in terms of nutrition and not just a branding exercise, the large companies will not be forced to spend on good packaging. Primary and secondary packaging costs typically constitute 8-10 per cent of the total cost base for most FMCG players.

Then there is the concern over the impact of packaging material on the ecosystem. "A significant proportion of packaging is polymer-based and non-biodegradable," says Abhishek Malhotra, head of consumer markets at Booz and Company. For essential commodities such as milk, this aspect is not given much importance. For products such as snacks, packaging sustainability has become an issue with consumers and regulators, adds Malhotra.

Packaging companies are aware of the demands of the future and are working towards it. Manjushree Technopack, for instance, has set up a subsidiary called Mphinite to research packaging material. "Our mandate is to reduce the weight of the packaging material. Every year we need to reduce it by a number of grams to be cost competitive," says Ankit Kedia of Manjushree Technopack, and predicts that 10 years down the line, starch-based biodegradable plastic would be a big business across the world and the next logical step for packaging companies to take if they wanted to tap the global FMCG market.

Others are working towards using returnable packaging. "This is now proving to be a major success with our customers. The packaging can be used multiple times and recycled even after it is damaged," says Saraogi of the Chemco Group. This has allowed the company to reduce costs while working with large firms.

Finding better and more viable packaging solutions is a work in progress. For now, though, the short-term business goal for the smaller packaging companies is to capture the growth in the milk, oil, juices and food markets. The packaging industry has packed itself in tight for growth in the next five years.