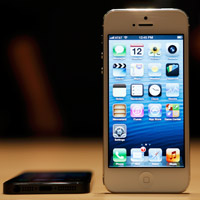 08 November, 2014
Print this article Font size -16+
The most anticipated launch event of the year and, somehow, people seemed disappointed. Apple launched the new iPhone 5, but didn’t stop there. It also announced the new operating system iOS 6, the new A6 chip that’s twice as fast as the A5, new versions of the iPod and a new version of iTunes.

From a technology perspective, none of what was announced was new: information about the improvements has been leaking for months, so no surprise that people who came to the launch seemed disappointed. The stock price stayed flat too.

Rather odd, it seemed, when you look at some of the numbers.

Apple has 27 per cent of the PC market in the US, and has grown faster than the industry for six years in a row.

Despite the launch of new Android-based tablets, the iPad still sold 17 million units; more than the entire suite of some PC makers. The iPad’s market share went up to 68 per cent from 62 per cent; yet, not many were impressed. Perhaps they miss Steve Jobs.