The Matriarch And Her Family 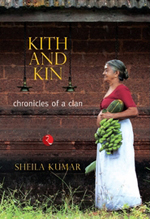 When a novel chooses to begin with a page-and-a-half-long list of characters, it should make you wary. When that novel is only about a fifth of the size of War and Peace, you can be quite baffled by the prospect of having to abruptly flip pages back and forth just to keep track of who is exactly who. And when at page 102, when a ninth chapter introduces a ninth set of characters into what you assumed to be a single story, you may be just forgiven for wondering if there wasn't a better way to write a story.

But if you see Kith And Kin as a set of separate short stories (19 in all), it is a delightful peek into the remnants of a fictional clan, the Melekat Tharavadu, characterised by all round snobbishness and ready wit, personified by its now deceased matriarch, Ammini Amma. Once the most prosperous and powerful family in town, the second generation is left picking up the pieces, trying to break away from the shackles of stiff upper lip tradition. A transition that is, however, managed only by the third generation, for whom Melekat is just an identity, perhaps nothing more than an explanation for the few weird traits they all share.

There is Suvarna, Suv, who is bequeathed the ancestral home, Mon Repos. The only problem is she doesn't want it. It is for Sumant that she pines, though she 'chooses not to own him'. There is Seema, having to sit through a school reunion of her husband's, wondering what was behind the smile of Sameer, a man with his own secrets. There's her sister, Sindhu, carrying on a semi-furtive affair with a married man. There's Veena and Vasu, siblings who must pretend to be oblivious to their mother's delusions of grandeur. There's even a journal-keeping ghost of an ex-Melekat, who's not cut out for haunting.

Every story brings out the contrast between perceptions and reality, our thoughts actions inevitably influenced by our perception of situations. If only we knew what the other person was thinking, how much more easier would life have been! On page 225, the reader is introduced to 18th set of characters in the book. One of them, Dakshu doesn't see the point in continuing with her husband. But then it doesn't make sense in leaving him either. Yes, an affair could be the solution to the boredom plaguing her life.

Meanwhile, ogling at Dakshu by the pool is a man, practicing a dignified response to his wife, who he suspects will leave him soon. Back home, Dakshu's husband wonders why on earth he married his wife, dumber than the prototype dumb blonde. But does he have a real reason to divorce right now? Perhaps, an affair. And if he kept matters discreet, his wife wouldn't even cotton on.

It's the myriad of whimsical characters, the pacy, witty writing, and the endings that define most chapters that makes Kith And Kin a treat to read. However, at some point, you do wonder if too many stories have been wedged into a single novel. Way too many characters, all related in some knotted fashion, distinguished by not more than one consonant in their names. There's Seema, Beena, Veena and Leela, none of whom are siblings. But then again, if you were 'mallu', you would understand. Neither would you mind, if you were brought up on those shores, the several references to Baranis and Nayadis, Valichapadus and the local Pooram. In fact, like me, you may be thankful to the author for demonstrating how a 'tharavadu' and the people who live in it can be way more whimsical than anything you have ever experienced. Yes indeed, if she still has another story in her, and that makes its way into a novel, I will be reaching out for that too.