The Many Avatars Of Capitalism 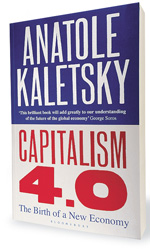 The surest way to be taken seriously as an economist is to predict disaster, quips Anatole Kaletsky in Capitalism 4.0. But the economist-journalist does a lot more than doom-saying in this outstanding work. "All great financial crises begin with the belief that the world has changed forever. They end with the realisation that change was not what it seemed," he begins the book with this prelude, and takes the reader through various stages of capitalism.

This work is full of optimism and spoils the fun of the still-surviving Marxists who saw the end of capitalism after Lehman. The odyssey goes through the evolution of economic thought and capitalism. There are chapters where he brings macroeconomic theory and explains how they shaped policy. The narration is brilliant, especially where it blends theory with crises.

The Austrian model would argue that when interest rates get low, investment surges and moves into low-quality assets such as sub-prime lending. John Maynard Keynes would say investment increases due to animal instincts, and when it falls, the correction is slow; so governments are needed like the bail outs. US economist Hyman Minsky's theory would point to investor psychology leading to overconfidence and innovation to promote excess risk, leverage and debt. George Soros explained the crisis as the gap between our cognitive function, which understands reality and the manipulative function that tries to change it — a clash of reflexivity.

Kaletsky says the latest financial crisis came about not because of the greed of bankers or speculators, or the stupidity of regulators, but bad judgement of former US Treasury Secretary Henry Paulson. He jolts the reader when he says that talent is applicable to rock stars and Hollywood actors and not bankers.

Easy to read even for the novice, the book explains how each era of capitalism had its own economists and politicians. Adam Smith, David Ricardo, William Jevons and Léon Walras dominated Capitalism 1.0. Keynes ruled capitalism 2.0, supported by US Presidents Richard Nixon and Jimmy Carter. Capitalism 3.0 was (Milton) Friedman-dominated, with Margaret Thatcher and Ronald Reagan backing the wave; it was persevered by George W. Bush, Paulson and Alan Greenspan. This was also the phase of the Washington Consensus, which used a lot of mathematics and was governed by two theories: the rational expectations hypothesis (REH) and the efficient market hypothesis (EMH).

Rational expectations assumed governments do not work and that the Ricardian equivalence resulted when states spent more; consumers spent less. The EMH was full of math and led to high levels of leverage and depended equally on complex risk management models, which ultimately failed. The ultimate blow was that the models projected there was only 1-in-3-trillion-years a chance of such a crisis, when it had happened thrice in 20 years — 1987 (stock market), 1994 (bonds and currencies) and 1998 (LTCM).

Capitalism 4.0 works on the premise that economies are not static and that the relation between the state and the private sector is symbiotic. There are four key dangers for capitalism 4.0: rising government debt; financial paralysis as countries balance private requirements with state expenditure; trade imbalances as the US and the Euro region sort out contradictions through state intervention, while China and Japan rely on market forces; and stagflation caused by Opec, trade unions and protectionism. Kaletsky sees some interesting reconciliation taking place after the usual clash of ideologies in this brand of capitalism. Some of them are competition between the US and China, convergence between the US and Europe, rivalry between western and Asian values, working of businesses and government together, environment and growth, currencies and financial relations, prosperity without growth, natural resources and limits to growth, etc.

But, he admits, nothing about capitalism 4.0 would be rational or perfectly efficient or balanced, and the future will be unpredictable.

Finance ministers have to be dour and stodgy, while central bankers repeat the sadomasochistic catchphrase — I am paid to worry. This is a must read book for anyone who likes to smile when being serious.

Author's  Details
Anatole Kaletsky is a journalist and economist based in the UK. He is editor-at-large and principal economic commentator at The Times, where he writes a thrice-fortnightly column on economics, politics and financial markets. Kaletsky had joined The Economist in 1976, writing about business and economics. He has also worked with Financial Times in posts such as  International Economics Correspondent.