The Making Of A Newspaper Goliath 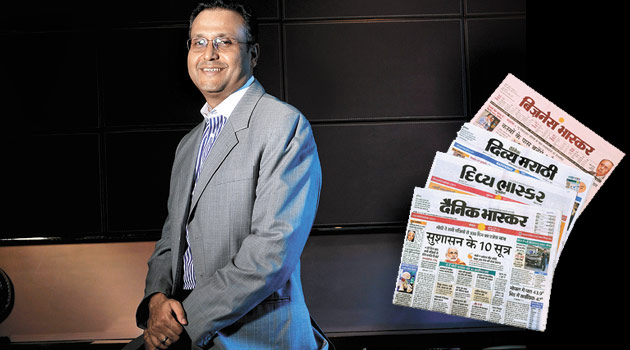 08 November, 2014
Print this article Font size -16+
On 19 January this year, Hindi daily Dainik Bhaskar entered Bihar with its Patna edition, the 37th of the Bhopal-headquartered newspaper. Launched with a print run of 170,000, it outdid the local leader, Hindustan, a Hindi daily from Hindustan Media Ventures, on day one.

Speaking about the planning that preceded the launch, Anil Singh, chief general manager, Operations (Circulation), DB Corp, owner of the various Bhaskar brands, says the company sent out an army of close to a thousand surveyors to contact nearly 2 million people to understand what they wanted. The results were startling. Ninety-one per cent of respondents said their daily newspapers were politically biased; 89 per cent felt the city required a strong law and order regime; 92 per cent said Patna’s traffic was chaotic; while 88 per cent put cleanliness at the top of their wish-list.

“These surveys provided us editorial inputs for the launch. There was demand for development of Bihar. This was the key issue in the minds of readers that Dainik Bhaskar sought to tackle,” says Singh, asserting, “That is how we are number one on the day of launch or become number one soon after in the markets we enter.”

Presently, DB Corp publishes 67 editions of eight newspapers in four languages across 14 states, with a readership of 19.8 million. In a world where print publications are shrinking, with some even closing down, DB Corp has grown at an impressive rate of 17 per cent, generating revenues of Rs 1,883.6 crore and profit after tax of Rs 306.6 crore in FY14.

But with the digital era coming of age in India, is the Dainik Bhaskar story sustainable?
‘Regional’ Strategy
Dainik Bhaskar was first launched as a single-city edition from Bhopal in 1958. For nearly four decades till the 1990s, the Ramesh Chandra Agarwal-promoted newspaper remained central India-centric. Its city editions in Gwalior, Ujjain, Jhansi and Indore had a tough time beating steady player Nai Duniya, an Indore-based Hindi daily since 1947. Finally, in 1995, Dainik Bhaskar succeeded. Its circulation, which was at 350,000 in 1996, shot through the roof, expanding to 3.5 million by 2004. All this in less than a decade’s time.

The inflection point for the group was when it decided to go beyond Madhya Pradesh (MP) and tap potential Hindi-speaking markets, before branching out to other rapidly developing regions such as Gujarat, Maharashtra and Bihar. It adopted a rapid-fire expansion strategy — launching multiple editions in states in quick succession, followed by marketing and sales blitzes — to ensure that the newspaper was on top from the start.

After a long period of surveys and marketing, DB Corp launched its first non-MP edition in Jaipur in December 1996 with 172,000 copies. On the very first day, the edition outdid the established Rajasthan Patrika, which had a circulation of 100,000.

The next destination was Chandigarh, where Dainik Bhaskar was launched with 69,000 copies. It quickly went past the long-time player, The Tribune. Haryana and Ahmedabad editions followed soon after. In 2003, the group launched a Gujarati daily, Divya Bhaskar, in Ahmedabad with a 452,000 circulation. It outdid Gujarat Samachar right away. In the next few years, Divya Bhaskar grew to nine editions in Gujarat, with a circulation of 1.15 million, racing ahead of both leaders, Gujarat Samachar and Sandesh.

“Our focus has been on the states which were notching a higher growth in state GDP,” says Girish Agarwal, director, DB Corp. These states include Rajasthan, Gujarat, Punjab, Maharashtra and Bihar. “Markets like Mumbai are growing slower. The English newspapers in Mumbai take away the lion’s share in advertising,” says Agarwal, adding: “That is why our focus is on tier-II and -III cities. We will never launch in Mumbai. Even Pune is not part of our plan.”

Asserting that the group based its expansion plans purely on “revenue potential”, Agarwal says consumers in tier-II and -III towns have become brand aware. So, advertisers are willing to spend more to reach these markets.

Pradeep Dwivedi, chief of sales and marketing, DB Corp, labels Dainik Bhaskar’s decade-long bid to get advertisers on board the ‘Un-Metro’ campaign. “The point of inflection has arrived. About 60 per cent of the real economy is in tier-II and -III towns; advertisers have been slower than consumers to realise this, but the shift is happening. Revenue from Hindi advertising is 38 per cent, outstripping English, which is at 36 per cent,” he explains.

Getting The Product Right
To capture readers, DB Corp has invested substantially on months of pre-launch surveys. Its army of surveyors gleans crucial insights about the market, and also doubles up as direct agents for the newspaper, collecting subscriptions and gathering feedback. It was an important policy decision to not entrust the task to a market research agency, but keep it an in-house affair.

“Our surveys, before the Aurangabad launch in 2011, showed readers were sceptical of the editorial line of Marathi dailies Lokmat and Sakal, the owners of both being leaders of political parties,” says Singh. The insight helped develop Divya Marathi into a ‘neutral’ product that became a market leader in the city with 90,000 copies.

Agarwal claims a crucial factor in the newspaper’s expansion strategy has been its design and content. The group has invested Rs 275 crore in buying the latest printing presses from Germany for Indore, Jaipur and Ahmedabad. Manufactured by Koenig & Bauer AG, these high precision, gigantic presses roll out 85,000 copies an hour compared to standard machines that churn out only 30,000 an hour. “We have invested heavily in editorial content. We have tied-up with Harvard Business Review and 17 other knowledge partners. We have a network of 3,000 journalists. We do not accept paid news. All this is to ensure premium content and a mass-premium reader that advertisers seek,” says Agarwal.

Commenting on its business aggression, Angel Broking says: “DB Corp, a dominant player in the overall regional print space, enjoys a premium valuation compared to its peers — Jagran Prakashan and Hindustan Media Ventures. The reason can be attributed to DB Corp’s business model (primarily driven by ad revenue) and well thought-out launches in new markets.”
break-page-break
A Well-knit Family
Speaking of his association with DB Corp, Aakar Patel, who was group editor of Divya Bhaskar at the time of its launch, says, “The Agarwal family brought in corporate values in a market where newspapers like Sandesh did not even have a sales team. They were focused on revenue. I have seen them deliberately bring down circulation in localities from where they saw no returns coming.”

The Agarwals exhibited unconventional wisdom in editorial matters too. Patel, for instance, who had worked in many English newspapers, was hired to head a Gujarati newspaper despite his inexperience in the vernacular media. Yatish Rajawat is another example. The business journalist, who worked for an English publication, was hired as the group editor of Hindi daily Dainik Bhaskar. “As long as the editor knows his readers, language is irrelevant, the Agarwals believed. For them, the editor is not just for editorial work, but for managing resources,” says Patel.

The management of DB Corp is controlled by the well-knit, hands-on Agarwal family. Started by Dwarka Prasad Agarwal in 1954, the reins were passed on to his son and current chairman Ramesh Chandra Agarwal. His sons, Sudhir, Girish and Pawan, all in their 40s now, took over the administration in 1996. Over time, Sudhir Agarwal rose to the position of MD and CEO of the publishing arm, planning overall strategy and expansion, while Girish, became a director in charge of sales and marketing. Pawan, the youngest, oversees the group’s fortunes in radio and digital media.

In 2011, Girish Agarwal moved to the thermal power generation business of the family, following which the sales and marketing functions were entrusted to professionals Pradeep Dwivedi and Anil Singh.

Limits To ‘Print’ and ‘Region’
DB Corp’s strategy is based on the presumption that print media in India will continue to buck the international trend, and stay dominant for some years. A recent Pitch Madison report on the advertising industry in the country came out with startling projections that support the group’s presumption. According to the report, for the year 2013, print has again emerged as the biggest contributor to the total advertising pie. It superseded television and widened the gap further between the two. Print was the largest contributor at 41.3 per cent, with TV trailing at 39 per cent. For the year 2014, it predicts: “Print is expected to grow by 17 per cent compared to only 4 per cent in 2012, and is expected to clock a revenue of around Rs 15,405 crore, compared to television’s Rs 14,282 crore.”

International trends are quite the opposite. According to a report by Pew Research Center last October, only 38 per cent of Americans said they regularly read a daily newspaper, indicating a 54 per cent decline since 2004. During the same period, advertising in print media has dived from $48 billion to $22 billion.

The other assumption on which the group works is that the regional and tier-II and -III markets are under-served. These markets comprise a large section of literate and educated masses that aren’t catered to right now. Dainik Bhaskar’s Patna survey showed that just about 40 per cent of Bihar’s literate population reads a newspaper, thereby providing huge scope for market penetration and expansion.

Is DB Corp on the right track? Or is it taking a big risk by putting too many eggs in the print basket, considering that sooner or later, the Indian media market too will move away from print platforms to television and online? Is its publishing strategy too narrow, with the entire focus on emerging markets?

Metropolitan cities are anathema for the group as is evident from its experiment with English daily DNA. Prasoon Pandey, head of investor relations, DB Corp, reveals how Zee TV’s chairman Subhash Chandra, an old family friend, convinced the Agarwals in 2002 to join hands with him to launch an English newspaper. The two set up Diligent Media in a 50-50 partnership.

DNA had a big launch in Mumbai in 2005, followed by a series of launches in Bangalore, Pune, Indore, Jaipur and Ahmedabad that had the Bennett, Coleman & Co, the publishers of The Times of India, quaking in their boots. On DNA’s launch, Pandey says, “The idea then was to capture all the six metros and make merry in the English language market.”

The experiment came a cropper by 2009. DNA was making a loss of Rs 6-8 crore a year. The 2009 meltdown and stagnation signalled a change in strategy for DB Corp, and by 2010 the group had told Chandra that DNA should either be sold or he should take it over entirely. In early 2012, DB Corp finally exited the joint venture. While Chandra took over the Mumbai, Pune and Bangalore editions under Diligent Media, the Indore, Jaipur and Ahmedabad editions went to the Agarwals.

The Indore edition of DNA has been shut for six months now, while the Jaipur and Ahmedabad editions continue to limp. According to Pandey, these editions will be continued without fresh investment as a countervailing strategy to possible forays by foreign media groups in the future.

All this begs the question: can a print media group build scale without a presence in the TV world or in metropolitan cities? The metros are tough to break into, but they are the centres of culture, power, news and, most importantly, consumers with high purchasing power.

The group is conscious of its limitations and has, therefore, been diversifying into radio and digital media. With 17 radio stations today, it has expanded its ad revenue in radio from Rs 67 crore in FY13 to Rs 80 crore in FY14. Online/digital ad revenue has also moved up from Rs 10.8 crore to Rs 16.3 crore during the same period. But these make for a minuscule part of the whole pie.

Counterings doubts, Agarwal says the decision to exit Diligent Media was based on the realisation that the big urban centres weren’t meant for the group. “Unlike most media companies, we are driven entirely by revenue and business concerns; not by philosophy and ego.”