The Mad Rush To Connect 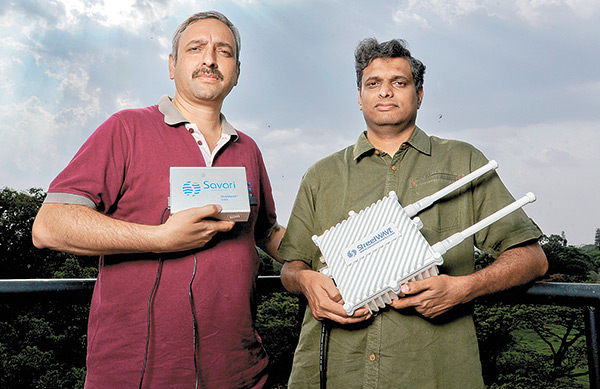 08 November, 2014
Print this article Font size -16+
Driving through traffic will surely qualify as one of the most boring activities. Be it Mumbai’s Pipeline Road, Bangalore’s M.G. Road, Vikas Marg in New Delhi or Anna Salai in Chennai, Indians waste a lot of time on the road. On average, three hours a day are spent in traffic jams. That said, the car density in the country is a mere 15 to 1,000 citizens. But that number is rising, which means the traffic situation is not going to get better. Given the traffic scenario, there has been a movement globally to make the car a productive device. A revolution of sorts is in the making and efforts are on to build ‘intelligent’ cars. India plays no small part in these efforts, with many an experiment taking seed here. These ‘intelligent’ cars can take over when drivers wish to take a nap after a hard day’s work, and hand back the controls once the driver is ready. Sounds far-fetched? Science fiction is now science fact with a bunch of startups leading the way. Alongside are majors like Bosch, Continental, Delphi, Denso and Visteon. What is common is that all of them  are harnessing India’s software prowess to pack cars with cutting-edge electronics.

Time To Start It Up
Tucked away in a corner of Jayanagar, an affluent south Bangalore locality, is a startup called Savari Networks, founded by four friends — Sridhar Reddy, Girish Rayas, Ravi Puvvala and Faroog Ibrahim. Five years ago, these engineers picked up a white paper on vehicle-to-vehicle communication, and used that to build their own wireless module, which would enable inter-car communication.

The device informs the driver about what is happening on his route, well before he gets to that point on his journey. The vehicle’s display flashes messages regarding traffic jams, accidents and the number of pedestrians on a route, among other things. This small mobile Linux-based unit, which is mounted in the car, communicates via wi-fi with units mounted on traffic lights across the city.

The information is collected on servers owned by the city municipality or on the cloud, on a real-time basis. It is then used by transport departments to re-route cars during a crisis. It also allows the government to track a citizen’s driving habits and work with citizens to prevent crime and accidents. A driver can also allow an insurance company to access his car diagnostics, so as to be charged lower premia based on his clean driving record.

“This is what vehicle-to-vehicle communication is about, not some advertiser sending messages on a smartphone based on your GPS location when you are driving,” says Sridhar Reddy, co-founder, Savari Networks. The technology is practical and real. It is an off-the-shelf product that is being tested by the US Department of Transportation and the Crash Avoidance Metrics Partnership, a consortium of several automobile original equipment manufacturers (OEM) such as Ford, General Motors, BMW, Hyundai and Toyota in the US. The product will be available in the market by 2017, and is already being tested in Anne Harbour, Michigan. The team is hoping that the mobile unit will retail at less than $100, when launched. But it was never an easy road for the four partners. However, it was the Department of Transportation that put them on track to realising their dream of becoming a preferred vendor to OEMs. “The product can be retrofitted into every vehicle before 2016, and the OEM will launch the product in 2017, provided the product passes all the regulatory requirements,” says Reddy.

Several hundred miles away in Kochi’s Startup Village, there are two companies looking to change the future of driving. Rohildev N., founder and CEO, and Charls S. Vincent, chief product officer, of Robotic Human Logic Vision (RHLV), and Arvind Sanjeev, founder of ARS Technologies and Devices, believe that their technologies hold the answer to consumers looking for easy access to information from their cars while driving or performing chores.
Sanjeev spent many a day and night perfecting the coding of applications to be operated from his Honda City as well as home lighting systems. “I was always interested in throttling my car and operating all electrical systems with my smartphone, so I kept connecting everything electrical to my phone,” says Sanjeev. After graduating, he built an embedded module that could fit into the telematics unit of any car, and could be operated via Bluetooth.

While making a presentation for Startup Village in Kochi, he met the BlackBerry team. The latter was looking for apps to be built on the Blackberry10 platform and he was keen on fitting his embedded module into BlackBerry’s QNX car telematics global module. With BlackBerry’s support, his dreams went global. “Now, your smartphone can become your car key, read vehicle diagnostics and control the lights,” he says.

A similar commercial product is being perfected by another startup called Moonraft, in Bangalore, for Mahindra Reva. Moonraft’s app allows the customer to interact with the Reva electric car vis-a-vis its diagnostics and preventive maintenance. Sanjeev now wants to white label the product into the telematics systems of OEMs.

If Sanjeev was trying to bridge the communication gap between car and phone, his friends Rohildev and Vincent were working on a ring-like device which would use gestures to control all the knobs and buttons in the car. Their product prototype ‘FIN’ became a surprise hit at the Consumer Electronics Show in Los Vegas this year.

FIN has a Bluetooth stack which enables one to connect to the phone, operate the car’s telematics and even open windows with gestures. Touch the top of your ring finger and it opens up the music player, and when you touch the index finger, your phone book opens up. FIN’s cool colours make it look like a teenage trinket. But the best part is that it is small and yet packs in an inertia measurement unit, low energy micro-controller, touch and optical sensors.

Rohildev and Vincent met in Coimbatore, while studying in the same engineering college. Their attendance was dismal because they would spend most of their time studying new software languages like Python PHP, HTML5 and C# from the Internet. “I started working on gesture-based algorithms in my fifth semester of college to control my laptop from my bed,” says Rohildev.

He used the laptop’s camera software and programmed it to recognise gestures. That was his eureka moment. The duo graduated and immediately began exploring opportunities in making a product in Kochi.
break-page-break
Two years on they have signed on a large electronics manufacturer in Chennai to make 10,000 units of FIN, a PCB-based wearable device, and are talking to various automobile majors and mobile device manufacturers in India. They have also received $20,000 as seed funding from a Delhi-based investor and have used this money to make demonstrations of the product in the US. “In one case, we got to go to Vienna, Austria, because the organisers loved our product and sponsored our entire trip,” says Vincent.

FIN will have all the customer usage data sitting in the RHLV cloud, which can later be monetised with insurers, data analytics providers and automobile majors. The product is priced at $120, and will be delivered by December 2014.

There is another Pune-based startup called CarIQ, founded by Sagar Apte, who has built a device which can monitor the car’s diagnostics. The company, founded three years ago, has priced the product similar to the FIN.

The USB-like device, when plugged into the on-board diagnostics of the car, collects information — on the engine, suspension, differential, etc. — from the car’s engine control unit, or ECU and sends it to CarlQ’s cloud. Its GSM communications module (a SIM card) will store this information and sell it as a service to the consumer.

“At present, our system works with all cars launched after 2003,” says Apte, chief executive officer, CarIQ. This is the first predictive maintenance package from any company in India. What is interesting is that all these companies are yet to generate any meaningful revenues, some of them surviving on software services to maintain cash flow, till such time as investors are convinced enough to fund their products and services.

Business Out There
For these startups, the big draw is the 80-million-units-per-year global automobile market that is in desperate need of disruptive innovation. Today, ‘device-to-car’, ‘vehicle-to-vehicle’ and ‘vehicle-to-infrastructure’ pilot projects conducted by OEMs are changing the way we perceive the car. Nokia Growth Partners have committed $100 million to fund companies that can build products, software and services around connected vehicles.

Qualcomm is building a chipset that can send information to cars from pedestrians who have smartphones. While this project is still under wraps, the chipset will collate information from all smartphones on the road and beam information to cars on the road, about traffic and road conditions. Sources say it is more of a ‘device-to-vehicle’ communication process, where the car driver and phone owner are unaware that information is being beamed to cars.
Intel Capital, too, has set aside $100 million for connected car startups. But the reason why there haven’t been any large investments in startups is because today the ecosystem’s structure is a bit unclear and not ready for new entities to scale up, based purely on the car as a device. There are mobile apps using GPS locations to push advertising, while people are driving. But that is advertising and is not even remotely close to a connected car.

Engineers are yet to figure out a business model because vehicle information is not yet allowed to be on the public telecom network. Most of the information is still on a one-way street and is sitting in modules, which are used by car dealers and OEMs, when the car comes in for service.

“The car has to be thought of as a device, thanks to Steve Jobs, who made devices which put the consumer in control,” says Peter McCarty, project manager at TE Connectivity, which builds connectors for all sensors in a car. Today, cars in the US and Europe already have 3G and 4G packages on board. However, the OEMs have exerted so much control over information that they never thought of opening up the telematics systems to the consumer.

“The truth is that OEMs today have to accept that there is a race for the operating system, in which they are behind, and consumers will want their smartphones to control their cars’ telematic systems,” says McCarty. He adds a note of caution. There has to be a tremendous effort by all concerned to secure the software of the chipsets that control the functioning of a car’s components and that these systems should be protected if they are allowed to communicate with the network on a real-time basis.

OEMs will have to add firewalls to protect ECU software and not let networks access the functioning of components. They will perhaps allow driver usage patterns and component wear and tear data to be captured on the go and stored on the cloud.

German car maker BMW is already doing this for predictive maintenance with the help of SAP. It is capturing driving patterns in a database. This data, when collected in a network which is regulated and protected, can make accident and health insurance meaningful and insightful.

Such information for citizen safety and protection can become paramount when a consortium of government and OEMs sets the communication standards for cars. This is when there will be several more startups across the world, and countless ones from India. Automobile majors have already begun gearing up for the change.