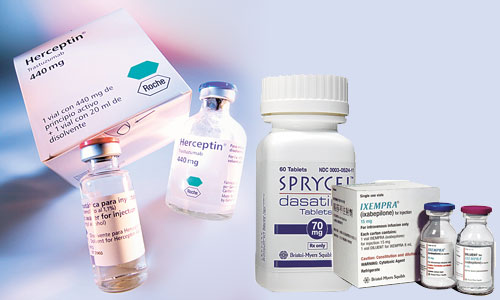 08 November, 2014
Print this article Font size -16+
The recommendation by a panel set up by the Centre to allow manufacture of low-cost versions of three patented cancer medicines under the ‘compulsory licensing’ clause of the Indian Patent Law  has triggered a fresh round of debate around the application of this legal provision. The drugs in question are Herceptin (Roche), Ixempra and Sprycel (both from Bristol-Myers Squibb, or BMS).
While patient groups call the move the result  of their persistent demand for low-cost generic alternatives to patent-protected drugs, the Organisation of Pharmaceutical Producers of India (OPPI) fears it may affect the introduction of new medicines in the country. Stakeholders are waiting to see if the recommendation will be approved by the commerce ministry’s Department of Industrial Policy and Promotion. If approved, the recommendation can result in the Controller General of Patents, Designs and Trademarks issuing compulsory licences for the production of generic versions of the three drugs.
The first instance of compulsory licensing came  last year, when Natco Pharma was permitted to make a generic version of Bayer’s patent-protected cancer drug Nexavar. Natco was allowed to sell its version on condition that a month’s dose would not cost more than Rs 8,880, against Rs 2.8 lakh charged by the German drug maker.
Health activists expect a similar development in the case of Herceptin, Ixempra and Sprycel, since their monthly doses are also in the Rs 1.5-2.5 lakh range. “This move will come as a huge relief to the thousands of women with HER2+ breast cancer whose lives can be saved by Trastuzumab (Herceptin), but who are unable to access this drug because of predatory pricing by Roche. A full course of Trastuzumab treatment costs Rs 6-8 lakh at current prices,” says Kalyani Menon-Sen, coordinator of the Campaign for Affordable Trastuzumab (CAT).
But OPPI director general Tapan Ray says such a move may “signal immense unpredictability in the environment of bringing new life-saving drugs to India”. He adds, “Grant of compulsory licence for Nexavar to Natco by the Indian Patent Office last year had already raised serious concerns across the world on the robustness of the IPR (intellectual property rights) ecosystem in India. Recent news reports on the same issue will vindicate the concerns.”
Issuance of compulsory licences alone cannot result in the production of low-cost medicines since firms will have to come forward to produce the medicine at a fraction of the innovator’s cost.

According to a World Health Organisation (WHO) expert, local production will only be a problem for Herceptin. Natco has already developed a generic version of Sprycel and is marketing it at a tenth of BMS’s price. Indian drug makers are expected to go the same route should the compulsory licence come through.
In November, CAT had written a letter to the Prime Minister, urging the government to make Herceptin affordable and freely available.
With 500,000 people dying annually due to cancer in India, the debate over compulsory licensing is unlikely to be settled anytime soon.