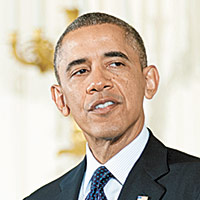 08 November, 2014
Print this article Font size -16+
In his recent State of the Union address, President Barack Obama vowed to bypass a divided Congress and take action on his own to bolster America’s middle class in an attempt to breathe new life into his second term after a troubled year. Obama unveiled a series of executive orders and decisions — such as wage hikes for federal contract workers, creation of a ‘starter savings account’ to help millions of people save for retirement, healthcare, women’s empowerment, new fuel efficiency standards for trucks — moves likely to inflame already tense relations between the Democratic president and Republicans. “I’m eager to work with all of you,” Obama said. “But America does not stand still — and neither will I. So, wherever and whenever I can take steps without legislation to expand opportunity for more American families, that’s what I’m going to do.”

Stepping On The Gas
Honda Motor Co. exported more cars out of the US last year than it imported into the country, claiming a first among major Japanese automakers. More than 30 years after it began building cars in the US, the company’s North American arm said it shipped 108,705 Honda and Acura brand vehicles out of the US in 2013. The company imported 88,537 vehicles into the US from Japan. Rick Schostek, Honda North America’s executive VP, told the media that the milestone was “one that’s been 30 years in the making”. The exported vehicles carried a value of $2.7 billion. The net exporter status is also the product of significant recent investment — Honda has put more than $2.7 billion into expanding its North American auto plants in the past three years. That’s part of a strategy designed to boost production in the US and make cars close to the markets where they are sold. Honda shipped to 50 countries from its US plants last year.

Open Books
US tech firms may give the general public and their customers more details about the court orders they receive related to surveillance, under an agreement with the US government. Firms such as Google and Microsoft were prohibited from disclosing even an approximate number of orders they received from the US Foreign Intelligence Surveillance Court. They could give out only an aggregate number that combined surveillance court orders, FBI queries, subpoenas in criminal cases, among others. The deal frees the firms to state, for example, how many orders they receive in a six-month period from the surveillance court.
Legacy
Ben Bernanke adjourned his last policy-setting meeting as Federal Reserve chairman with the announcement that it would trim its bond purchases by another $10 billion as part of the plan to continue winding down its extraordinary economic stimulus despite the recent turmoil in emerging markets. The action was widely expected, as was apparent when the meeting ended without dissent — a first since June 2011, indicative of how tumultuous Bernanke’s tenure has been. In addition to proceeding with scaling back its bond buying, the Fed made no changes to its other policy planks.


Not In Sync
The level of benefits paid in pensions, jobseeker’s allowance and incapacity benefit in UK is “manifestly inadequate” because it falls below 40 per cent of the median income of European states, said the Council of Europe in Strasbourg. The finding, in a review of the UK’s adherence to the council’s European social charter, is likely to provoke a fresh spat between the UK and European legal structures since the council said the conclusions were legally binding, while the department for work and pensions in London said the findings merely had to be “taken into account” by British courts when assessing claims.

Intelligent Buy
Google is buying privately held artificial intelligence company DeepMind Technologies. According to reports, the deal is said to be priced at $400 million. Founded in London in 2012 by Demis Hassabis, Shane Legg and Mustafa Suleyman, DeepMind uses general purpose learning algorithms for applications such as simulations, e-commerce and games. Google, which is working on projects such as self-driving cars and robots, has in recent years
become increasingly focused on artificial intelligence.

Huge Costs
Qualcomm, the world’s biggest cellphone chip maker, may be hit with a record fine exceeding $1 billion in a Chinese antitrust probe, raising the spectre of harsh penalties for foreign firms facing an increasingly aggressive regulator. China’s National Development and Reform Commission (NDRC) began investigating Qualcomm last year. The probe and the potential fine — the quantum of which could hinge on negotiations — come as the NDRC zooms in on IT providers, especially firms that licence patent technology for cellphones and networks.

Changing Hands
Lenovo group has agreed to buy Google’s Motorola handset division for $2.91 billion, in what is China’s largest ever tech deal. Lenovo will thus be buying its way into the heavily competitive US handset market, dominated by Apple. It is Lenovo’s second major deal in the US in a week, after it said it would buy IBM’s low-end server business for $2.3 billion. The deal ends Google’s shortlived foray into making consumer mobile devices and marks a pullback from its largest ever acquisition. Google paid $12.5 billion for Motorola in 2012.


Cutting Numbers
Barclays is set to cut hundreds of jobs in its investment banking division, says a source familiar with the matter, as the British lender keeps pushing to reform its business. The number of jobs being axed is in the “low hundreds”, say reports, and are expected in the next few weeks. Barclays is also apparently restricting travel to meetings, a sign it is clamping down on costs. Last year, CEO Antony Jenkins pledged a fresh course for the bank, in an attempt to restore its reputation following a series of scandals. Early 2013, he had said the bank would shed 1,800 jobs in corporate and investment banking and 1,900 in its European retail and business banking. The planned cuts come in addition to those.

Pulled Up
BNP Paribas has been censured by Australian regulators after revealing that its traders tried to influence the setting of the country’s benchmark inter-bank interest rate, the latest in a string of scandals over global rate setting. BNP will make a A$1 million ($874,800) donation towards promoting financial literacy after an internal probe found derivatives traders discussed preferred settings for the Bank Bill Swap Reference Rate.