The Legend Signs Off 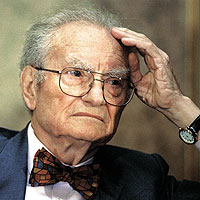 It is said that a genius is someone who has one good idea in a lifetime: Paul Anthony Samuelson, who died on 13 December at the age of 94, had several, from growth theory through finance to international trade.

Most students of economics, both within and outside academia, of the modern age will have at least a nodding acquaintance with his seminal textbook simply titled Economics. From its first publication in 1948, the book has gone through 18 editions, the last one in 2005, and sold over 4 million copies and has been translated into 41 languages. Few books in publishing history have been so widely read.

Contemporary economists point to his almost extraordinary ability to ‘tune in' any kind of audience, whether students taking introductory courses in economics, or mathematical economists, government officials or even lay readers of his columns, many of which were carried in this magazine over the past two years. Former head of the International Monetary Fund (IMF) Stanley Fischer put it most eloquently: "To read Economics is to have a glimpse of the extraordinary mind that created it: undogmatic, generous to predecessors and contemporaries, encyclopedic, of course brilliant, and most remarkably, skeptical, not inclined to take itself too seriously. Those are not properties that come in that combination very often, least of all in a textbook."

He leaves behind an extraordinary legacy, but he will be missed. No word has been invented to describe anyone who has had so many in one lifetime, and which have so profoundly influenced 20th century economic thought; perhaps they should consider using ‘Samuelson'.