The Last Of The Legends 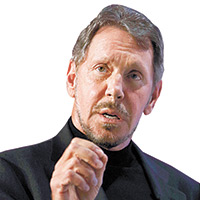 08 November, 2014
Print this article Font size -16+
Lawrence J. Ellison has resigned as chief executive of Oracle, a company he founded in 1977 that has transformed the way businesses use technology. His departure, said to be part of succession planning, is among the last exits of the tech industry’s first generation of celebrity executives who took computers from the back offices into the mainstream. Ellison, who turned 70 in August, will, however, continue to work on Oracle’s technology as executive chairman. The company paid him $67.3 million for his final full year on the job.

Au Revoir
Baudouin Prot, chairman of BNP Paribas, has decided to step down effective 1 December after 31 years with the French bank. He is expected to be succeeded by Jean Lemierre, an adviser to the bank since 2008. Prot was BNP Paribas’ CEO from 2003 until 2011, when he became chairman, and was in charge of the bank during the period in which US authorities allege BNP Paribas violated US sanctions imposed on Iran, Cuba and Sudan.

A-lister
Undoubtedly PepsiCo’s CEO Indra Nooyi is among the top businesswomen globally, but this time she took a little tumble. Fortune ranked Nooyi, 58, the third most-powerful businesswoman of 2014, down from the second position that she held last year. Nooyi is the only Indian-origin woman in the 2014 list in which the first and the second positions are held by IBM CEO Ginni Rometty and Mary Barra, CEO, General Motors.

Girl Power
Like Wonder Woman and Catwoman, Facebook COO and Lean In author Sheryl Sandberg has now been immortalised in a comic book. She’s starring in a 32-page graphic novel Female Force: Sheryl Sandberg, a biography told in the first person. The comic is part of a series that has featured powerful women, including Hillary Clinton, Michelle Obama and Melinda Gates.

Turfed Out
Billionaire Vinod Khosla, co-founder of Sun Microsystems, lost his bid to block the public from using a beach on a 53-acre plot he bought for $32.5 million in 2012. In a case that has added to an intensifying debate about the influence of wealth in the San Francisco Bay area, Khosla was told by a state judge that he must allow access to the popular surfing beach until he obtained a coastal development permit.

End Of The Line
Syndicate Bank chairman and managing director Sudhir Kumar Jain, who is in CBI custody currently, has been terminated from the services of the bank with immediate effect on the government’s orders. Jain was arrested on 2 August for allegedly receiving a bribe of Rs 50 lakh and abusing his official position to enhance the credit limits of some companies.

A New Role
Royal Bank of Scotland chairman Philip Hampton has been chosen the  next head of GlaxoSmithKline. The appointment came days after GSK was fined almost £300 million by Chinese authorities for bribery and two months after a profits warning exposed broader difficulties for the drugmaker. He will join the board in January, and become the chairman with effect from 1 September 2015.