The Jury Is Out

If you use a Tata Photon dongle for connecting to the Internet or, let’s say, have booked a holiday through travel agency Cox & Kings, chances are that you have agreed to an arbitration clause as part of the Terms of Service set forth by these companies. Yes, that long document filled with legalese that you probably did not bother to read. The clause would state that if a dispute arises between you and the service provider, the dispute will be settled through arbitration. 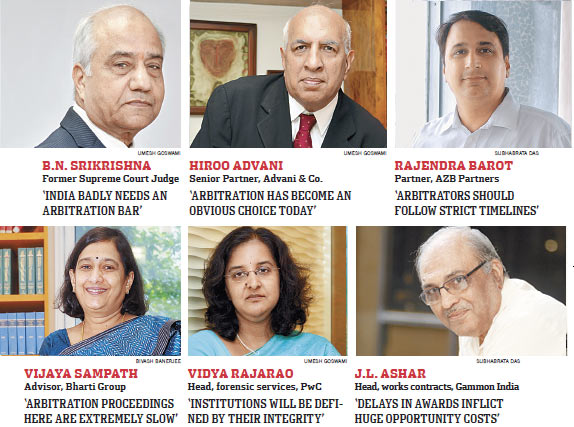 If you think arbitration cases are restricted only to consumer disputes with service providers, you would be mistaken. Some of the biggest battles in the corporate world are being fought in arbitration centres — not in courts of law. For instance, the acrimonious dispute on whether Unitech has any veto rights to prevent Uninor’s sale of assets is now in front of arbitrators at the Singapore International Arbitration Council (SIAC). The Company Law Board under the Ministry of Corporate Affairs where the dispute had first landed, allowed Unitech’s plea for the dispute to be settled through arbitration in Singapore.
The dispute between India’s biggest private sector firm Reliance Industries (RIL) and the Centre on costs incurred in the KG-D6 basin is also likely to be decided by an arbitration tribunal consisting of former Supreme Court (SC) Chief Justice S.P. Bharucha and Justice V.N. Khare and an as yet unnamed presiding member. The government has reportedly sought the services of former solicitor general Gopal Subramaniam to argue its case, while RIL is represented by yet another former solicitor general, Harish Salve.
The other high profile cases expected to be settled through arbitration centres include Sistema versus the Government of India on the cancellation of 2G licences as well as Vodafone’s $2.5-billion retrospective tax dispute with the income tax department (through the Bilateral Investment Treaty (BIT) with the Netherlands).
Welcome to the world of arbitrations, the corporate world’s answer to the long and winding road that is the judicial system, where any dispute — from the terms of divorce between two of the largest automakers in the world to the future home of paintings allegedly stolen by the Nazis during World War II — can be resolved by a neutral umpire. Over the past decade, arbitrations as a means of dispute resolution have shot up sharply. SIAC, which is Asia’s biggest hub for arbitrations, saw a doubling of the number of cases involved in arbitration between just 2008 and 2011. For disputes involving at least one Indian party, the increase was threefold, with a total of 217 million Singapore dollars being in dispute in 2011. An Ernst & Young study, ‘Changing Face of Arbitrations in India’, said that during 2004-07, the SC decided 349 arbitration cases. It also said that the Delhi High Court’s mediation and conciliation centre decided 668 out of 868 cases in 2007-08. While no real figures are available, the value of corporate disputes being settled through arbitrations are estimated to run into several billion dollars.

Mukhopadhaya recounts a recent dispute between an Indian company and the subsidiary of a foreign company that was resolved in around six months. “Both the counsel as well as the arbitrators wanted to end the matter quickly, and so it was possible,” he says.
To Get It Going
The answer is also to have strong institutions of arbitration within India that enforce such discipline. The Indian Council of Arbitration (ICA), set up by industry body Ficci in 1965, claims to have received over 500 requests in the past couple of years. But rarely does it hear a major case. Vineet Vij, head of the legal department at HCL Technologies, says while he is impressed with the rules of the ICA, perhaps, it has not been able to translate into confidence in its procedures in terms of timely closure of proceedings, costs and enforcement of awards.
Vidya Rajarao, who as head of forensic services at PwC India assists in putting a value to claims as part of arbitrations, explains the advantages that foreign arbitral institutions have. “What makes them more successful is their integrity and a sound procedure of dispute resolution within the minimum time-frame possible,” she says. “Above all, they have been seen as a neutral venue for arbitration. These institutions go a long way to understand the future market and prepare themselves in advance to face potential disputes between parties.”
A ray of hope on the horizon, if it can do better, is the Indian subsidiary of the LCIA, its first independent subsidiary outside London. Set up in 2010, it seeks to institutionalise for India the same qualities that make LCIA a global hub for arbitration. While, even by its own admission, it has cases only in the single digits, most lawyers agree that that is only because the contracts that name the LCIA-I as the seat of arbitration are relatively new, with disputes yet to occur.
But the law on arbitrations may also need modification. The Arbitration and Conciliation Act of 1996 was specifically designed to reduce court interference, in line with global practices. But after a spate of successive SC judgements, courts now have the right to interfere in arbitration at several levels, becoming further hurdles in what was intended to be a smooth ride. Justice Srikrishna is quite vocal about this: “If the law did not intend courts to interfere in arbitrations, judges cannot give themselves the right to.” The court’s argument in the Patel Engineering verdict was that the chief justice’s role cannot be merely administrative, but has to be judicial. But that has opened the gates for the courts to interfere, defeating the purpose of arbitrations.
In fact, courts also ruled that merely signing a consumer agreement with a service provider does not make it a contract, because few consumers have the opportunity to read the agreement they are signing in its entirety or the expertise to understand the fineprint.
The role of courts in arbitration will soon have a definitive judgement when a five-judge bench of the SC headed by Chief Justice S.H. Kapadia pronounces its verdict on the validity of the Bhatia International ruling. Expected before the chief justice retires in late September, lawyers hope that the court will put an end to the confusion by prescribing clear guidelines on when, and on what grounds, the judiciary can interfere in arbitration.
Also in another promising development, last week in Mumbai, some of the most prominent law firms, including AZB, J. Sagar, Economic Laws Practice and Advani & Co. came together to form an arbitration bar, which they hope will take the lead in evolving best practices for the ecosystem around arbitrations to follow. There seems to be some hope that the arbitration scene can be turned around without waiting for legislative reforms.
In the meanwhile, at least some companies are modifying the arbitration clauses in new contracts to take care of some of these issues. But for the average Indian corporate, with more of a reactive mindset when it comes to litigation, it would prefer to assume that like in marriages, quibbling between parties can be hushed without invoking the law. Of course, the legal professionals are not complaining.
abraham(dot)mathews(at)abp(dot)in
(This story was published in Businessworld Issue Dated 03-09-2012)