The Journey Of India Inc 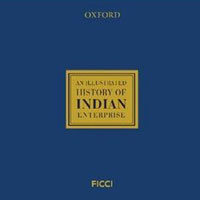 08 November, 2014
Print this article Font size -16+
On 20 December, Oxford University Press with the Federation of Indian Chambers of Commerce and Industry (FICCI) launched the book, An Illustrated History of Indian Enterprise, in New Delhi.

The launch of the book was preceded by a panel discussion on Indian enterprise. The panel discussion saw participation from eminent personalities in the field of business and economics took part. The panel comprised eminent economist Dr. Ashok Desai, and was moderated by renowned economist Gurucharan Das. The business fraternity had able representation as well in the form of Vikram Mehta, CEO, Shell Group and RV Kanoria from Srei. The chief guest for the event was Sachin Pilot, minister of state for corporate affairs.

The discussion began with a debate on the reasons behind India's success post the reforms of the early 1990s, especially when 64 other countries underwent reforms in the same time frame. The question was raised by Das. According to Dr Desai, India's case is peculiar as the country has been able to progress despite the fact that it is a relatively closed economy; especially in the context of European countries which trade a lot more among themselves. Desai also emphasised that for the growth momentum to continue India has to continue with its policy of opening up the economy. "For this we need to invest heavily in port and maritime infrastructure," he said.

Another perspective was offered by Mehta who said that a big part of the success lay in the fact that Indian businesses did not follow tried and tested methods of scientific business management that succeed in the western world but are just not enough for India. He cited the example of Reliance's Jamnagar refinery which was built by the Ambanis despite studies that suggested that no such refinery could succeed in the country. "The fact remains that for the first 10 years of its operation that refinery was the most successful refinery in the world, despite the fact that prior to it beginning operations, all feasibility studies suggested that it would be an astounding failure," he said.

Another interesting aspect of the discussion was the changing face of Indian business that remains mired in tradition despite modernity that is slowing creeping into it. Das cited the example of the Forbes Indian billionaire list which invariably has a dominance of people from communities such as the Marwaris, Baniyas and Khatris.

The reason, said Kanoria, is because these are traditionally communities that have leanings towards entrepreneurship. However, he said that modern India Inc is increasingly looking to create a disassociation between succession and control. "This is the sign of an industry that is maturing and becoming more professional," stated Kanoria.

The high point of the discussion however came when Pilot said that India and its enterprise were still at a high point despite the global ebb. "The bottomline is that of the past 8 years for 6 years we have a GDP growth of over 8 per cent and just because this has come down to 6.5 per cent this year, we are all pessimistic. Fact remains that 6.5 per cent growth is still decent in a global economy in the grips of a slowdown," Pilot said.
Tags assigned to this article:
books ficci oxford university press sachin pilot ashok desai swati garg an illustrated history of indian enterprise