The Journey Of An Entrepreneur 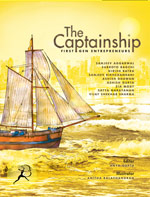 08 November, 2014
Print this article Font size -16+
If you are studying engineering, you are not studying science. You are studying to become an engineer. Then when you graduate, it is often the case that you realize you don’t really want to be an engineer. It’s not so exciting. Then you go to business school. That’s what most engineers do now. I was certain early on that I didn’t want to work as an engineer. I wanted to do my MBA. Therefore, I thought I might as well spend three years studying economics instead of five years in college training to be an engineer. This is why I chose to study economics at Stephen’s over engineering at IIT.

After graduating, I didn’t know what to do. I didn’t know where to go. I was accepted into IIM, but had also got a job offer in advertising at Lintas. I decided to join Lintas. My decision was based on two pieces of logic. The best business schools in the world, which are in the United States, generally take people who have first worked for a few years. You will gain a lot more if you can relate to what you are studying because you have worked before. I felt that was useful.

I was barely able to survive on my salary at Lintas. I was earning 1,500 rupees a month. Even in 1984, it was hard to live in Bombay on 1,500 rupees. I paid 450 rupees in rent for an attic with six beds. I was always hard-up for cash. But I experienced a maximum amount of learning in those three years at Lintas. It was my first job, and your first job is always the one where you learn the most as long as you are with a good organization.

Lintas at that time had perhaps the best talent pool in advertising in the country. My contract said five days a week, but we worked six and a half days. It was so much fun. Lintas was full of young people. We all had to work hard because we had impossible deadlines to meet. We were stretched, but we were learning. When I started Naukri, I knew I wanted to recreate this work culture for all our people.

After Lintas, I went to IIMA. In the 1980s, the admission policy at IIMA ensured that there was diversity in the classroom. You had students from different academic backgrounds and with different kinds of work experience. There could be a maximum of 50 per cent of the students in the class from any one academic background. This made for a 360 degree experience, with several points of view on the table during class discussions. There were a fair number of mavericks and independent thinkers. Many of us simply did not want to work as employee managers and we had said so in the admission interview.

Today, India’s best business schools, including IIMA, seem to be ignoring the value of diversity in the classroom. The admission policy at IIMA has changed; 93 per cent of the students in the current first year batch are engineers—a retrograde move. If you reduce diversity, you produce clones. And a class of clones is likely to produce fewer entrepreneurs.

The goal of every good school should be to produce a fair number of misfits—because that is what entrepreneurs are. They do not see themselves fitting into existing corporate structures.

Reflections
…when I started Naukri, I realized that in an organization, you have to have processes. The key for me was to build a team with someone else who was more process-oriented than I am because that is a gap I have. I have remained consistent. I still cannot do something because of external stimulus. Somebody else can do it.

You could say that we have empathy for the less obedient sort at Naukri. We work hard to ensure that everyone has the freedom to speak his or her mind. We encourage a culture of independent thinking with a high tolerance of dissent. I guess it is this acceptance that allows our independent-minded businesses like Jeevansathi and Happily Unmarried to thrive beside each other.

Retention of the entrepreneurial spirit has to be driven from the top. This has been our experience. First and foremost, you must hire the right kind of people. Entrepreneurial managers are a rare breed. We look for people who have the experience of having worked in a large organization, and, despite having performed well there, are dissatisfied with excessive controls and yearn for greater independence. We look for people who are somewhat irreverent but at the same time understand the need for organization-building and for the right kind of controls to ensure performance and governance without stifling creativity. And all this without compromising on the competencies required to actually do the job.

Such managers are rare to find, but if you don’t recognize that these are the people you need, you will get them only by accident. And then you won’t know what to do with them. Once you have a few of these folks on board, you need to agree with them on expectations and, most importantly, empower them. If you don’t, you will be wasting a precious resource and chances are that they will leave in some time anyway. So give them all the assistance they need and ensure you don’t get in their way.

In any company, there will be people who will resist the empowerment of others—most notably the people under them. Get rid of the control freaks, no matter how good they are technically. In the long run, they will ensure that the organization remains inconsequential.

Lastly, close the loop by ensuring that you have a generous wealth-sharing plan. These are the people who will take the organization to the next level. Ensure that they are rewarded well for their performance – way beyond the market price, usually through ESOPs. A performer must never even think of looking elsewhere.

You are now no longer an entrepreneur alone. You have to assume the role of creating other entrepreneurs internally. You are consciously building an argumentative company.