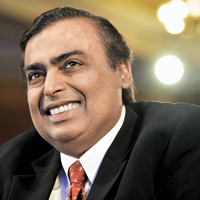 India’s richest man, mukesh Ambani saw his wealth increase by 20.2 per cent to a whopping Rs 1,36,348 crore in 2013-14, largely on the back of the improved performance of flagship Reliance Industries’ (RIL) traditional businesses. While the refining business delivered the highest ever profits with a sharp recovery in gross refining margins, earnings from petrochemicals rose on account of margin expansion across polymers and downstream polyester products. Among Ambani’s new investments, the one in shale gas saw a jump in earnings and Rs 363 crore in profit before depreciation, interest and taxes.

During the year, the elder Ambani focused on building a new Reliance by investing nearly Rs 18,000 crore on buying spectrum to create a sizable telecom vertical — Reliance Jio. The expectation is that the company will witness a mega launch in 2015. In fact, Reliance has already signed agreements with sectoral rivals — Bharti Airtel and Reliance Communications. Reliance Jio has bagged a unified licence for all 22 service areas across India for voice telephony and high speed data services.

The depreciation of the rupee against the dollar helped boost Ambani’s wealth too. RIL gained by shoring up its exports by over 15 per cent and raising cheaper dollar loans. Standard & Poor’s has raised RIL’s long-term corporate credit rating to ‘BBB+’ from ‘BBB’, among of the best for an Indian corporate and the best for an Indian oil and gas company.
— Nevin John

Sunil Bharti Mittal, the 57-year-old chairman of Bharti Airtel, has been the undisputed leader of the Indian telecom industry for well over two decades. This year, he’s the second-richest Indian, valued at Rs 1,13,827 crore.

That’s a change from last year when Mittal had slipped down the list following the 2010 acquisition of Zain Africa. Airtel had shelled out $10.7 billion for its presence in 17 African nations. It spent another $2.7 billion that year to acquire 3G spectrum in the 2100 MHz band.

There are three reasons for the rise in Mittal’s wealth: First, Airtel has reduced its debt burden. Post two bond issues — a $1 billion US-bond and a 750 million euro bond — Airtel’s net debt as of end-March 2014 was $10.07 billion as against $10.73 billion in the last fiscal. That number should fall further over the next few months.

Lastly, there is finally some degree of clarity in telecom policy. In 2013-14, the government conducted the auction of 900MHz/1800MHz band spectrum. That has paved the way for more auctions this year.
— Anup Jayaram

As in the last fiscal, metal baron Anil Agarwal’s companies continued their healthy run on the stock market in 2013-14. Agarwal’s personal wealth increased 17.2 per cent to Rs 1,03,756 crore, but his rank slipped a notch to 3 on BW | Businessworld’s Super Rich list.

In its first financial year post-merger, Sesa Sterlite recorded revenues of Rs 66,152 crore and profits at a consolidated level of Rs 10,339 crore. The market capitalisation of the company stood at Rs 55,722 crore on 31 March 2014. The restart of mining in Karnataka and Goa were positive signs for Sesa.

Cairn India achieved a cumulative production of over 200 million barrels of crude and increased its production by 7 per cent through well construction — 129 new wells in Rajasthan. The operating cost stood at $3.9 per barrel.

Agarwal, however, continues to be haunted by the ghosts of some of his investments in India. Vedanta Aluminium is running below capacity after failing to get approval to mine bauxite in the Niyamgiri hills of Orissa. His repeated attempts to increase his stake in Hindustan Zinc and Balco have drawn a blank so far. He expects the new government to go ahead with the divestment programme.

Agarwal plans to devote most of his personal wealth to philanthropy; in particular, to eradicating malnutrition in India under a Vedanta project called Khushi.
— Nevin John

An improved performance by IT major Wipro, currently in the midst of a multi-year turnaround, the continued growth of Wipro Enterprises, the consumer care arm, as well as successful investments by Premji Invests in private equity deals, meant that India’s richest technology billionaire had a very good year.

During the fiscal ending March 2014, Premji’s compensation more than doubled to $1.7 million, mainly on account of an increase in the variable component. Wipro, till recently losing out to nimbler rivals such as TCS, HCL and Cognizant, improved its performance last year, leading to the rise in the variable component paid to Premji. His 73.47 per cent stake in the listed company also fetched him a dividend worth $247 million.

The consumer care business, which was separated from the IT business in 2012, continued to grow above the industry average. His private family office, Premji Invests, participated in a slew of investment deals, including Myntra (recently acquired by Flipkart), Snapdeal and Future Lifestyle.

Premji, one of India’s most generous philanthropists, has already donated more than a quarter of his wealth. This includes a gift of 213 million Wipro shares to the not-for-profit Azim Premji Foundation, which mainly works in the field of education.
— Venkatesha Babu

when kumar mangalam Birla took the reins of AV Birla Group in 1995 — after the death of his father Aditya Vikram Birla — the turnover was just $2 billion, with overseas operations in Egypt, Thailand and Indonesia. The group has since grown to $40 billion with operations spread across 36 countries. In line with the growth of the group, Birla’s wealth has shot up and, in the last financial year, it went up by 23.5 per cent to Rs 75,691 crore. Birla is in fifth position in the BW Super Rich rankings in 2014.

Despite the weak economy, the group has made some aggressive moves towards realising Birla’s dream of achieving revenues of $65 billion by 2015. The group’s cement company UltraTech acquired Jaypee’s plant in Gujarat for Rs 3,650 crore in September to emerge as the largest cement maker in the country. In the last fiscal, Birla also exited from its Canada-based BPO business —Aditya Birla Minacs was sold for $260 million. The group faced some setbacks too. RBI did not consider its application for a banking licence. Besides, Birla was named in the CBI chargesheet on coal mine allocation. The delay in construction of Hindalco’s new plants and rising debt are among the group’s other concerns.
— Nevin John

The numbers for 2013-14 vouchsafe Shanghvi’s impeccable track record of delivering better profits and revenues for Sun Pharma year after year. The net sales of the company increased 42 per cent, and net profit was up 60 percent over the previous year.

The big differentiators in FY2013-14 were the performance of Israeli acquisition Taro Pharma and Sun’s growth in the US and in India. Thanks to its big portfolio of dermatological products in the US, Taro’s revenues went up 13 per cent and net profit rose 35 per cent over the previous year.

Sun’s branded prescription formulations business in India grew 25 per cent over the previous year. Similarly, its overall sales in the US grew by a whopping 43 per cent. Shanghvi’s wealth was also given a boost by another listed company, Sun Pharma Advanced Research Company. His fortunes will receive a shot in the arm when Sun Pharma completes the merger of Ranbaxy Laboratories with itself. The $4-billion deal, announced in April, will get completed by December 2014. — P. B. Jayakumar

The share prices of the Adani group’s listed companies —Adani Enterprises, Adani Ports and Special Economic Zone (APSEZ) and Adani Power — went up sharply during the year, despite Adani Power faced a crisis due to hike in prices of coal imports from Indonesia. Market analysts link the spurt to the supposed proximity of the Adanis to Prime Minister Narendra Modi.

The Adani group got a boost from the performance of its ports and power businesses during the year. Mundra port became the first Indian facility to handle over 100 million tonnes of cargo, in the process bagging the status of the largest commercial private port in the country. The biggest relief for the group, however, came from a Central Electricity Regulatory Commission order in February that allowed compensatory tariff for Adani Power’s project in Mundra with retrospective effect from April 2013.

While Adani Enterprises posted a loss during the year, APSEZ made a profit of over Rs 2,000 crore.  Adani Power recorded a net profit of Rs 595.2 crore, a turnaround from a net loss Rs 1,952 crore the previous year. At the group level, the net profit was Rs 2,220.7 crore during the year. The total income of the group also rose by around Rs 9,000 crore.
— P. B. Jayakumar

In the last one year alone, HCL Technologies, amongst India’s top five IT export service firms, has seen its market capitalisation nearly double even as it grew at a pace significantly faster than its peers. As a result, Shiv Nadar, founder chairman of the HCL group with the single-largest shareholding, has seen his wealth grow dramatically.

This, in spite of the fact that HCL Infosystems — a value-added IT reseller that is separately listed — saw its business slow down. Fortunately, HCL Technologies set a scorching pace of growth, especially in the infrastructure management services area that has resulted in a industryleading growth rate.

Owing to this, Nadar’s wealth has grown despite his minimum participation in the day-to-day operations of his companies. He currently wants to focus on the Shiv Nadar Foundation, which works in the area of education. The IT czar-turned-philanthrophist, who has so far donated more than Rs 3,000 crore towards running VidyaGyan schools and the Shiv Nadar University, has promised to donate Rs 3,000 crore more to support education and art philanthropic initiatives.

There have been rumours about Nadar looking to sell his stake in HCL for close to $10 billion. But he has brushed aside the reports. It is not difficult to see why. — Venkatesha Babu

In a year when the automobile industry faced its worst slowdown in five years, Rahul Bajaj managed to increase his wealth by around Rs 7,500 crore. Based on his stake in his various listed entities, Bajaj upped his net worth by an impressive 17.7 per cent.

A large percentage of his fortunes come from Bajaj Auto, the country’s second largest manufacturer of two-wheelers. In 2013-14, Bajaj Auto launched a series of bikes that tasted success, especially models from the tried and tested Pulsar stable. The company’s inroads in the premium segment with the Duke series, manufactured in collaboration with Austrian motorcycle manufacturer KTM, also met with a large measure of success.

The vocal opposition from car manufacturers did not deter the government from giving its nod to Bajaj’s quadricycle, the country’s first, which is set to replace the threewheeler auto-rickshaws on Indian roads. If and when that happens, it will only boost Bajaj Auto’s fortunes further.

Apart from the flagship Bajaj Auto, the 77-year-old patriarch saw his net worth grow in eight other publicly listed companies of which he is a promoter, including the likes of Bajaj Finance and Bajaj Electrical.

Such was the momentum that even a 50-day strike by workers at Bajaj Auto’s Chakan plant near Pune did little to dent the 77-year-old patriarch’s good run on the stockmarkets. — Sachin Dave

The wealth creator for Reliance ADA Group chairman Anil Ambani in FY2013-14 was his telecom business, Reliance Communications (RCom). The company, labouring under Rs 40,178 crore in debt, managed to put up a decent show on the stock market, mainly on account of its over $2 billion worth of infrastructuresharing agreements with Reliance Jio — Mukesh Ambani’s new 4G business.

Despite RCom making losses in the June and December quarters, and its revenues seeing slippage, except in the September quarter, its market cap increased 133 per cent to Rs 26,595 crore in the period — the promoter group holds 67.8 per cent of the firm.

Another group company, Reliance Power, commissioned a 660 megawatt unit (the second) at its Sasan Ultra Mega Power Project in the last fiscal. This sparked an uptick in its stock. Reliance Infrasructure too bettered its performance on the bourses though its Mumbai Metro project faced delays and it had exited from the Delhi airport
metro. — Nevin John