The Indians At The Peak Of Wealth 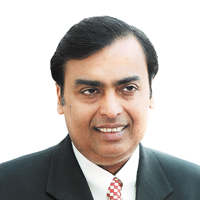 The underdog finally comes into the top dog league. In 2009, Businessworld had predicted that Ahmedabad-based Adani Group chairman Gautam Adani will be the next big man in Indian business (see ‘The Next Tycoon', BW, 6 February, 2009). Year 2011 is when he met that prediction. It is the year in which he became India's second-richest man — no mean feat for a first-generation entrepreneur lined up against centuries-old industrial houses and their myriad influences.

It is said that when the base becomes large, growth numbers go down. Adani proved to be an exception. The worth of his holdings in his companies, which was a humongous Rs 61,299 crore in March 2010, grew an astonishing 57 per cent to touch Rs 96,192 crore in March 2011. That powered him from No. 8 last year to the No. 2 slot. Such success was a far cry 25 years ago, when Adani came to Mumbai with very little money and began life as a trader. Today, he is among the biggest players in the infrastructure business with interests in ports, coal mines, power and edible oils. The push into infrastructure, in particular, has helped Adani shoot up the ranks of India's Super Rich.

A hands-on person, Adani is a man of few words. Most replies are in monosyllables or short sentences. However, he is reportedly a great listener. The snappy responses do not stop him having the last word in business deals of his group. Over time, he has acquired all the trappings of the Super Rich. That includes a fleet of BMWs and two jets. Recently, he is reported to have bought a red Ferrari for his elder son, Karan. His wife Priti looks after the corporate social responsibility (CSR) initiatives of the group. Younger son Jeet is still in school. Like Mukesh Ambani, Adani is also an avid cricket fan. He was also one of the bidders for an Indian Premier League (IPL) franchise.


His shiny silvery mane is the only thing flamboyant about Wipro chairman Azim Premji. One  of the leading lights of the Indian IT outsourcing industry, Premji is invisible in Bangalore's social circuit. A rare occasion when he was seen with family was at the wedding of Infosys chairman N.R. Narayana Murthy's son Rohan to Lakshmi Venu, daughter of TVS Motors chairman Venu Srinivasan.

Premji is frugal to a fault. He may be India's third richest businessman, but despite his wealth, he prefers to be driven around in his four-year-old Toyota Corolla, flies economy class (on international flights), and personally switches off power when exiting an unoccupied room. Wife Yasmeen, too, keeps a low profile, only having a say in the interior design of Premji's personal workplace. The sharp rise through the ranks of his elder son Rishad indicates the way ahead for the Wipro legacy.

The charismatic Sunil Mittal has grown from a seller of landline phone sets to India's telecom king through sheer grit. But he also happens to be a bit superstitious. Whenever he embarks on a new project, he turns vegetarian till the deal is done. What if the deal fails? Don't ask. Then, after completing the launch of mobile telecom services across India, he went to Tirupati to offer prayers. And his ‘lucky' number, 23 (which is his date of birth), shows up on his Mercedes licence plate. Mittal may be dashing and flamboyant, but he keeps his family away from the limelight. Wife Nyna is rarely seen in public, as is son Shravin, who is now into Bharti Airtel's overseas business.

True to his roots, Mittal sends gajak and rewri (til seeds coated with sugar/jaggery) — from his hometown Ludhiana — every Lohri to friends and associates. A few years ago, he bought a house in Lutyen's Delhi, which is called, well, White House.

The transformation of an industrious young man with dreams in his eyes from Patna, Bihar, to India's biggest non-ferrous metals and mining baron is a riveting story. The trader who used to commute across Mumbai on a scooter now shuttles between London, Africa (where he has mines) and Mumbai on his corporate jet. Now, Anil Agarwal, chairman of London-headquartered Vedanta Resources, wants to take his business into a new realm, that of crude oil. That venture, of course, is still in the pipeline, with Vedanta's acquisition of Cairn India running into government roadblocks.

Of late, Agarwal spends more time in London than India and lives in the city's posh Mayfair neighbourhood. Agarwal is known to be a very organised and tenacious person. Once he identifies what he needs to do, he is known not to give up until it is done. More importantly, he is willing to take risks. Agarwal has a spiritual leaning — he is a devotee of Lord Krishna — he recites from the vedas and offers prayers every morning. He also never misses an opportunity to visit the Siddhi Vinayak temple when he is in Mumbai. He is known to make cold calls in the hope of building relationships. In many cases, he has succeeded. He is married to Kiran Gupta whom he met in his hometown Patna.

He is corporate India's fittest CEO. Anil Ambani, chairman of the Reliance-Anil Dhirubhai Ambani Group and younger sibling of RIL's Mukesh Ambani, is a vegetarian and a teetotaller. He starts his day early in the morning with a long run down Mumbai's streets. He is also a regular at the annual Mumbai Marathon. Ambani is married to former Bollywood star Tina, and has two sons — Jai Anmol and Jai Anshul. This year, Ambani has seen his net worth fall quite sharply. However, his ranking has come down only one notch. Ambani holds a Bachelor of Science from University of Bombay and an MBA from The Wharton School, University of Pennsylvania, US.

He owns many cars. His favourites are rumoured to be a Lambhorgini and a Porsche.

Savitri Devi Jindal, India's wealthiest woman, is non-executive chairperson of the O.P. Jindal group of companies. Born in 1950 in the remote Tinsukia town of Assam, Savitri Devi is a humble, down-to-earth housewife. She heads a family with nine children including four sons and five daughters — Prithviraj, Sajjan, Ratan and Naveen, Seema, Sarika, Urmila, Saroj and Nirmala. While Savitri is present at the company annual general meetings, it is the sons — who run different group companies — who do the decision making for the group. She is the glue that binds the family together. Savitri Devi took over as the matriarch of the group after her husband O.P. Jindal tragically died in a helicopter crash in 2005. The iron-willed lady entered the political arena, too, to serve her locality, and was elected MLA to the Haryana Assembly for two successive terms from Hissar.

Clad in a simple saree, she likes to remain in direct contact with her constituency. She is also  involved in social welfare projects in the area.

IF the splintered Birla family was to thank one person for keeping its impressive legacy alive in the fourth generation, it would be Kumar Mangalam Birla, chairman of the Aditya Birla Group. Yet, in 1995, when a freshfaced, 28-year-old Kumar was made chairman following his father, Aditya Birla's untimely demise, there was scepticism all around on his ability to handle the huge conglomerate. But Kumar's fresh face belied his immense determination and business sense. Today, 16 years later, Birla is India's commodity king, the country's eighth-richest businessman and, incredibly, still the youngest among India's top 10 richest people. Birla and his wife Neerja have three children.


You need a good dose of luck, timing and immaculate strategy to make it big. Kushal Pal Singh had it all in good measure. An army officer of Deccan Horse regiment, he took over his father-in-law Chaudhary Raghuvendra Singh's DLF (then called Delhi Land & Finance) years ago. His vision to acquire  a barren stretch of land south of Delhi transformed a sleepy village, Gurgaon, into one of India's hottest commercial hubs, with hundreds of multinationals and Indian majors setting up their offices. His perseverance took an outrageous plan to fruition. This year, although the worth of his holdings in his company fell 13.5 per cent to Rs 35,665.94 crore, he managed to hang on to his No. 9 position.

Today, as Singh takes a back seat in the daily operations of DLF, son Rajiv, 48, who studied engineering at Massachusetts Institute of Technology, runs the show at DLF. Daughter Pia, 36, a Wharton economics graduate, runs the company's retail business. Last year, Singh was awarded the Padma Bhushan for his role in India's construction business.

A third-generation industrialist and the original king of scooters, Bajaj Auto chairman Rahul Bajaj is among the doyens of Indian industry. And unlike most of his ‘peers' in the top 10 billionaire list, Bajaj does not shy away from voicing his point of view on matters concerning the nation. An articulate  person, Bajaj has represented Indian industry in many global fora. Currently, he is a member of the Rajya Sabha.

A BA in economics from Delhi's St. Stephen's, Bajaj got into the scooters business in 1965, and ruled the sector for a considerable period of time. In the pre-liberalisation era, people waited patiently for years to get the keys to their very own Bajaj scooter. The company does not make scooters any more, but is the second largest motorcycle maker in India. Elder son Rajiv runs Bajaj Auto, and younger son Sanjiv runs the group's financial services business.