The Importance Of Market Value 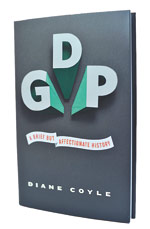 08 November, 2014
Print this article Font size -16+
No single number perhaps holds more sway in the affairs of nations as much as the rate of growth of the Gross Domestic Product (GDP). The minutest of changes in its value has won elections for politicians, had central bankers hyperventilating, and investment managers recalibrating their portfolios. But what goes into this number, and how representative is it of economic activity in an economy? Diane Coyle, an economist and author of earlier works such as Economics of Enough, makes a valiant effort to defog the calculation of GDP, widely seen as an indicator of economic activity in a country, in her latest book, GDP. She acknowledges the severity of the task upfront, but nevertheless distils the concept down to its simplest, embellishing the prose with examples from crime fiction to history that sometimes sounds stranger than fiction.

Coyle traces the history of GDP — how the number evolved as an econometric tool. Its birth centuries ago was conceived out of a need to know how much a country could spend on war, and the quantum of taxes that were to be levied to bridge the deficit. It was during the Second World War and the Depression that preceded it that forced economists and governments to see the need for a tool to measure output so as to determine  the nature of stimulus the floundering economy needed. GDP, as a concept, got a shot in the arm after the Second World War. As the geopolitical alignments got re-written, aid became a tool to win the allegiance of developing countries, and had to be given according to backwardness, which had to be then measured. Meanwhile, the West was also booming. Both the US as well as the USSR needed a common metric to measure economic superiority.

The next several decades saw the world embracing the metric, bringing it into layman vocabulary. But the periodical crises that the world economy saw since then also exposed the flaws with using GDP as the sole measurement of economic strength. For example, how does GDP account for the productivity increase that makes a computer priced way less than it used to two decades ago, accomplish much more? What about negative externalities, the price of environmental depletion, a by-product of growth and development? Coyle dwells at length on how the metric has to evolve to keep its relevance in changing times. The book is brief, and undoubtedly an affectionate portrayal, but it may still appear dense at some points.