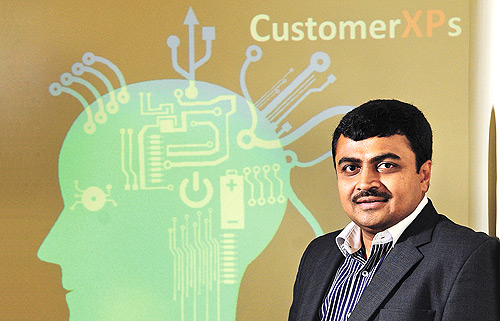 
Sharma's argument is based primarily on the reduced customer acquisition costs in recent years. The first and second generation of product companies had tried to develop products for the global market. Their development costs were lower than that of their western peers, but their marketing costs were higher. The current generation of companies uses the Web as a channel of sales with much lower and manageable costs. Of course, there are other important differences as well. "We will not see a Google or a Microsoft in India in the near future," says Sridhar Mitta, former R&D chief at Wipro who is an entrepreneur himself. "But we begin to see a large number of smaller product companies."

Indian firms now mirror the global trend of disaggregation, where software product companies have abandoned large products for smaller ones. This trend is hastened by the shift towards cloud-based offerings. As a parallel and complementary trend, Indian firms have diversified into a large number of domains such as security, customer relationship management (CRM), education, video and many others. This is in contrast to earlier generations who were focused on finance and telecom.

Some of them play in large markets, too. The CRM product market is worth $14 billion and it is merging rapidly with the equally large business intelligence market. The information security market, where Pawaa operates, is worth $2.3 billion. And yet, it tells only part of the story. Each of these markets has subsets where many product companies play.

In fact, there is nothing remarkable at the moment about these companies and cases presented here are merely representative. Yet, there are a large number of software product companies now, and together they make a sizeable industry. Nasscom says the Indian software product industry grew from $113 million to $1.64 billion in 10 years. It is slow going, and some surveys have even seen a slight decline in the size of the industry recently.

Yet, it is not easy to study this industry as many small companies are still privately owned and do not declare revenues. There is no doubt that the industry is now in the throes of change. As it extends its reach and increases depth, we could see a different industry emerging in the next 10 years.

Big StruggleIndia's software products industry began its journey in the early 1980s, but picked up momentum only in the 1990s. You could spot the odd software product company in the early 1990s (Subex, for instance, was set up in 1992), but they really started rolling out only towards the end of the 1990s. The dotcom boom saw many product firms being set up, largely in telecom and financial sectors. Hardly any one of them exists now, but not all were failures. Some of them developed useful technologies and were acquired by overseas companies.

break-page-break
Bangalore-based Alopa Networks, founded in 1999, developed software that helped broadband service providers manage subscribers. It was bought by C-COR, which was acquired by the US firm Arris Group. Impulsesoft, which developed Bluetooth products for the auto sector, was acquired by SiRF Technology Holdings (which was bought by UK-based CSR in 2009). Startups during this fertile period included Ishoni Networks, Banyan Networks, Poseidon Technologies, Indtelesoft, Tejas Networks and at least 50 others. Some of them even combined hardware and software to provide a technology solution. This era ended with the dotcom bust.

Many founders of these companies had a few things in common: they were young, mostly from the IITs, and had quit jobs with big, multinational companies to pursue their dream. At the age of 25, Baskar Subramaniam had quit Texas Instruments along with four colleagues to start Impulsesoft. "We found it very challenging to develop products for India," says Subramaniam, who is now the founder of another startup, Amagi. "There was no experience in product development in India. Our competitors in the US were playing golf with our customers."

After the dotcom bust and recovery, venture capital started to flow into India. During 2002-06, nearly $350 million of venture capital came into India, according to industry estimates. No studies exist that categorise investments during this period, but most of them went to firms with a hybrid business model. (No large services company has been funded after MindTree.) Few noticeable pure-play software product startups were founded during this period, and many of those who got funded are struggling even now. Theories abound as to why this was such a difficult period for software product firms, one of which involves the (false) assumption by investors and entrepreneurs of the existence of early adopters in India.  Venture-funded Silicon Valley companies depend on the early adopters of technology in initial days, but India has very few early adopters. Says Sharad Sharma: "Many Indian product companies failed after the dotcom bust probably because they were trying to replicate the Silicon Valley model in India."

But there are exceptions to this rule. Seclore was incubated in 2004 inside IIT Bombay, and is now considered a promising company in enterprise information rights management. Seclore had an experienced team: CEO Vishal Gupta and director of technology Abhijit Tannu had set up another IIT-incubated startup, Herald Logic, and co-founder Rahul Kopikar had over a decade's experience in Silicon Valley firms. Seclore's initial focus was on the financial sector; most of the large private banks in India are its customers.

When the first ripples of the recession started to flow across the world in 2007, the software product scene in India was far from encouraging. Apart from iFlex, there was no major global success in a startup. As the recession deepened and money became scarce, these firms were seriously ill. Their palpitations could be heard even a year ago when the recession began to leave. Browne and Mohan, a management consultancy in Bangalore, conducted one of the largest surveys done on software product companies in India. It painted a bleak picture.

According to Browne and Mohan, revenues of Indian software product companies grew from $113 million in 1999-2000 to $1.89 billion in 2008-09, but dipped to $1.64 billion last fiscal. The number of product companies here grew from 102 to 648 and dipped to 539 during the same period. The survey discovered many ‘me-too' firms, several that depended on one customer for more than 50 per cent revenues. A large number that were doing services as well as selling products, leading an uneasy life in the middle. Says Madan Mohan, managing partner at Browne and Mohan: "The industry together does not have a strong story so far."

The story could end sometime in the future for many of them. However, a new generation of product companies had been growing even as the recession started to deepen. It is hard to characterise them into a group. They work in a variety of domains, many of them in cutting- edge businesses that are still inchoate and hard to assess. Some of them could cross a billion dollars in revenue in a decade. But it is more likely that they would together create a software products industry in India, even though each one of them remains small or of medium size.

Experience Is The KeyTen years ago, you may have found it hard to find a person with the software product management experience of Rivi Varghese, in India. Varghese had graduated in the 1990s and spent 15 years working with software products in India, including at Infosys and Microsoft. He founded Customer XPS at the end of 2006. The company had brought together experience that was still rare among product firms at that time. Chief technology officer Aditya Bal was an IITian, who spent over a decade developing Finnacle at Infosys. COO Balaji Subramaniam, director of sales Aseem Purohit, CFO Sandhya V., product management head Peter Allen all had at least a decade and a half of experience in leading technology firms. "Right from the start, we tried to instill a products-only culture," says Varghese.

Customer XPS, which calls its products to be in the realm of ‘customer experience management' for the finance, telecom and retail sector, is now in the midst of its first major fund-raising exercise. In 2006, it was among the first few of a new breed of product companies: founded by people who had spent decades in the industry. There are many examples. PK4 was founded by the couple, Kishore Mandyam and Surekha Shetty, who had spent a decade in Infosys before spending another one in the Silicon Valley founding and selling two companies.

Druva, a rapidly expanding enterprise data security firm, was founded by a team each with over 15 years of experience in similar roles. Insta Health Solutions, a hospital management software company in Bangalore, was founded by Ramesh Emani, who had spent 25 years at Wipro and left two years ago when he was the president of telecom and product engineering. Yet, this generation of companies is notable for one other feature: they focus on the Indian market first. This is in contrast to earlier generations of companies that were built with ambitions of generating global revenues from the beginning.

PK4 makes a CRM product that is fully customised for small and medium Indian firms. Most CRM vendors do not provide customisable solutions. A few such as Salesforce.com do, but at a high cost, and that too through a third party. PK4 has around 80 customers in India and all of them were acquired over the Web. "We meet our customers after we close a deal," says Mandyam.

Indian product companies now find such Web sales extremely important for growth. FusionCharts sells its data visualisation products through the Web and can count US President Barack Obama among its customers. Founded in 2004, this earlier-generation firm exhibits some characteristics of all the generations and has been profitable all through its life. Druva, which generates $1 million in revenues every quarter, uses the Web extensively for lead generation. Of course, there are several products such as the ones for enterprise resource planning that cannot be sold through the Web.

We may have to wait for another 4-5 years to see whether this generation of companies will be successful. There are several entrepreneurs and associations that now take a serious interest in developing product companies in India. One of the most recent entrants is the three-decade-old MIT Enterprise Forum that opened its Bangalore chapter last month.

Indian software product companies now live in an environment much less hostile than what their predecessors faced a decade ago. Interestingly, deep technical expertise is no longer the clinching factor. Says Mohan Kumar, executive director of Norwest Venture Partners: "Technology has ceased to be the important factor in startups today." It is a trend noticeable even in the Silicon Valley. How well will Indian companies do in a more level-playing field?