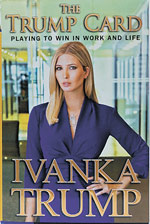 Ivanka Trump's journey at being a real-estate tycoon is no rags to riches story. And the young author makes no bones of the fact that it helped having a second name that garnered enough attention. In The Trump Card (Simon & Schuster), part memoir, part advice, Ivanka explains her goals to make it big in the real estate sector, and how she succeeds in doing so. The book is a mix of inheritance and individual dedication that helped 28-year-old Ivanka become a jet-setting businesswoman.

Throughout the book, Ivanka tries hard to disassociate her naturally inherited family name with her career. Daughter of real estate tycoon Donald Trump, she does have the ease and access to resources, and the privilege to accomplish the impossible. Soon after college, despite a job offer to join Vogue, Ivanka charts her own career path by working in firms such as in the retail section of Forest City Ratner Companies before boarding the Trump wagon.  Trump senior's shadow lingers all over the book, as Ivanka (re)collects from his wisdom, family life and his astute love for his job.

Following his footsteps in the Trump empire, Ivanka emerges as a go-getter, even though the knack for being one comes naturally to her. Yet, it will not be lost on the reader that being in top management at 24 is purely a matter of inheritance. Though not didactic, the memoir is a forthcoming account of one of the Trump heirs.