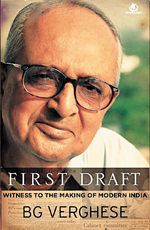 As a thumb rule, memoirs of veteran scribes always offer some exclusive, often explosive, information they claim they knew all along but never published for good reasons. They know it is such juicy bits of information that make people pick up their books. But B.G. Verghese is an exception here.

But he doesn't shirk controversy either. In First Draft, he describes contentious events in detail. Like the questionable "annexation" of Sikkim by India. Verghese had written damning pieces against the referendum, which he called bogus. He still thinks India could have handled the whole thing in a more transparent and fair manner.

In a no-nonsense style, he narrates the history of independent India — her struggles during Independence and after. Verghese gives insights into the personalities of stalwarts such as Jawaharlal Nehru, Indira Gandhi, B.R. Ambedkar, among others.

Throughout the 600-plus pages, the former editor gives the same treatment to what he wrote 60 years ago as to what he wrote, say, five years ago. So, you have such dense topics as water resources and development issues juxtaposing with populist politics.

What catches the eyes most is, perhaps, the way he describes his ex-boss, former Prime Minister Indira Gandhi, whom he served as a media advisor during 1966-69. Those were the days when you didn't have the luxury of getting all kinds of information at your fingertips. The media advisor's role, among other things, was to have access to "top secret" files, marked "burn after reading". The secret files are nothing but newspaper cuttings about political developments in India. Verghese gleefully makes a dig at the inconsequential confidentiality and the absurd protocol associated with it. In a sense, this book is part history, part memoirs.