The Good Times Go On 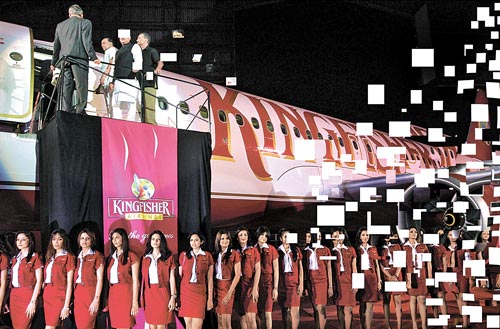 08 November, 2014
Print this article Font size -16+
Despite shedding as many as 1,621 employees in a span of one year, Kingfisher Airlines has not been able to trim its wage bill. The only reason for this could be a salary hike during the year.
This is surprising because the past year was one of the worst for Kingfisher since its inception. The airline’ reported losses of Rs 2,328 crore for the year ended March 2012. Besides, the airline has been steadily losing both its market share and load factor.
A close look at the company’s annual report shows that the wage bill in FY2011 was Rs 676 crore for a total of 7,317 employees. In FY2012, the bill came down by just 1 per cent to Rs 669 crore for 5,696 employees. The percentage fall in staff numbers is 21 per cent.
“This means the management has hiked salaries despite the beleaguered state of the airline. With  1,621 employees off its rolls, how can the salary bill not fall in line with such a sharp decline in staff numbers?” asks an aviation ministry official.
Sources say that several top officials of the airline have been given a raise in the past year. These include CEO Sanjay Agarwal (aggregated remuneration of Rs 3.3 crore per year, as per the annual report), executive vice-presidents Hitesh Patel (Rs 3.2 crore per annum) and Rajesh Verma. At the same time, many junior employees have seen inordinate delays in salary and, in some cases, have not even been paid, leading to a huge amount of discontent among staffers. Employees who have resigned have also had problems collecting their dues. “We have not been paid many of our allowances and dues. But the senior management seems untouched by the company’s problems,” says a mid-level employee of the airline on condition of anonymity. He says most employees who remain with the carrier are those who are unable to find suitable employment within the sector at comparable pay scales.
According to industry sources, Kingfisher has been paying higher salaries than the industry norm. Again, a closer look at its balance sheet shows that close to 126 employees are paid a salary of Rs 60 lakh and above annually. “In many cases, pilots with far less experience are being paid far more than their experienced peers at Jet airways or Indigo,” says an airline source.
In fact, salaries at Kingfisher Airlines are among the highest in the industry. For instance, Go Air — which has seen many senior-level exits — is paying well to attract talent at the vice-president level and above; however, its overall salary levels are still lower than that of Kingfisher Airlines, say industry sources.
An email questionnaire sent to Kingfisher Airlines management remained unanswered until the time BW went to press.