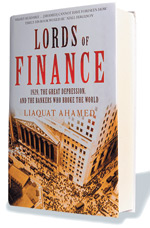 Do not be intimidated by the size of this book. If you do, you will lose a fascinating and gripping account of the Great Depression. Liaquat Ahamed's work on the global economic crisis is refreshingly different: the narration is fluid and the attention to detail is impressive.

Ahamed tells the story of the crisis by looking over the shoulders of the world's four most powerful ‘lord's men' at that time: Benjamin Strong, governor of the Federal Reserve Bank of New York; Montagu Norman, head of the Bank of England; Émile Moreau of the Banque de France; and Hjalmar Schacht, head of the German Reichsbank.

Compared to the celebrated studies on the subject by the economic iconoclast, John Maynard Keynes, and the economic historian par excellence, Charles Kindleberger, Ahamed is less academic, but by no means less compelling. In fact, Keynes' ideas are effectively woven into this analysis even as it provides useful counterpoints to the four lords of finance.

In December 1930, Keynes published an article ‘The Great Slump of 1930', in which he said the world was living in "the shadow of one of the greatest economic catastrophes of modern history". According to Ahamed, only a year before the crisis struck, industrial production had fallen 30 per cent in the US, 25 per cent in Germany and 20 per cent in Britain. Over 5 million men were jobless in the US, another 4.5 million in Germany and 2 million in Britain. Over the next three years, the economic turmoil spread across the globe, from the prairies of Canada to the teeming cities of Asia; from the industrial heartland of America to the smallest villages in Asia. No other period of peacetime economic turmoil since has come close to the depth and breadth of this cataclysm.

Who was to blame for the crisis? Ahamed invokes Keynes again, who had declared 13 months into the crisis that "we have involved ourselves in a colossal muddle, having blundered in the control of a delicate machine, the working of which we do not understand." In fact, Ahamed goes a step further. Debunking the contemporary explanations that appealed to the mysterious acts of God or to the inherent contradictions of capitalism, he firmly blames the "series of misjudgements by economic policymakers; some made back in the 1920s, others after the first crisis set in by any measure the most dramatic sequence of collective blunders ever made by financial officials".

Central bankers were larger-than-life figures in the 1920s, not least because they preferred to operate in secret. When Norman was asked of his reasons for promoting a policy, he replied: "I don't have reasons. I have instincts." Norman embodied a Britain stuck in the past and not reconciled to its diminished standing in the world. Strong, of the Federal Reserve, represented the new America engaged in bringing its financial muscle to bear on the global economy.

Norman and Strong were wedded to the gold standard. Moreau, the xenophobic and suspicious governor of the Banque de France, was an obsessive hoarder of gold, and tended to do his nation's own thing. The rigid and arrogant Schacht, who headed the Reichsbank, had engaged in currency reform, by hacking several zeroes from the currency to end Germany's hyperinflation in 1923. But he was singularly unable to convince his banking cohort to forgo reparations, even though they all appreciated that the post-War payments were "bleeding Germany white". By the early 1930s, less than eight years after hyperinflation had been brought under control, Germany was bankrupt, and resultant German bitterness helped pave the way for Adolf Hitler.

The quartet — with all their idiosyncrasies, brought out skillfully by Ahamed — were united in an arrogance that they alone knew the workings of the "delicate machine" and, therefore, could deal with the slump. They are portrayed by Ahamed as prisoners of an economic orthodoxy founded on the assumption that economies would work best under the gold standard, that is, each country's central bank had to have gold to back its currency — and that "all paper money was legally obligated to be freely convertible into its gold equivalent".

This "theological belief" caused the central bankers to raise interest rates, even though the larger economy desperately needed help. The gold standard described as "a barbarous relic" by Keynes was a fundamental error of economic policy that held the seeds of destruction.

Surely, modern central bankers have learnt from these old mistakes. Else, the impact of the current crisis would have been catastrophic.

Author Details:
Liaquat Ahamed has been an investment manager for 25 years. He has worked with World Bank, Washington and Fischer Francis Trees and Watts, New York. Currently, he is a director at Aspen Insurance, and is on the board of trustees of the Brookings Institution, a public policy organisation. Ahamed holds degrees in economics from Harvard and Cambridge universities.

Rajat Kathuria is professor with Icrier