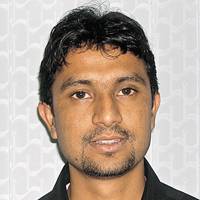 08 November, 2014
Print this article Font size -16+
Masplantiz Technologies The first Businessworld -Young Entrepreneur winner, Gurgaon’s Masplantiz Technologies — which makes software that can remotely monitor the performance of moving devices such as wind mills or transformers in transit — has seen mixed fortunes in the past year. While revenues have doubled, profits have improved marginally. “The banks had stricter lending terms and the founding team had to raise the debt,” says Mayank Chauhan, managing director of Masplantiz. “Now we have secured some working capital from HDFC Bank.” The five founders have also split, with Shashin Mishra and Ashutosh Fonia turning non-executive board members. This year, Masplantiz hopes to secure $5-10 million of funding from VCs or HNIs to scale up the business.

N.N. Sreejith
ROPE Rural Opportunities Production Enterprise (ROPE) International, which manufactures hand-crafted gift articles and lifestyle products using locally sourced raw materials and labour, has seen a great year. Its revenues and workforce have doubled as also its order book. Patrick Fischer, one of the two co-founders is, in fact, now on board as a full-time director. The recession saw ROPE lose a major nearly-firmed up deal, but there have been no setbacks within the company, which has been working hard to deliver on time. Ranked 2nd as last year’s Most Promising Entrepreneur, N.N. Sreejith has plans to expand aggressively. “We have changed our focus from relatively small bespoke corporate orders to pursue key [large] clients and overseas buying and retail houses,” he says.

Phaninder Sama
redBus It has been a while, four years, since Phanindra (Phani) Sama launched redBus after his repeated attempts at getting a ticket from Bangalore to Hyderabad during Diwali proved futile. One of the winners of last year’s Most Promising Entrepreneurs, redBus has not only survived but is doing great. An online bus tickets booking portal, redBus’s revenues have grown by 100 per cent since last year. Growth has come with the launch of a new product called BOSS (www.boss.travel), a software-as-a-service (SaaS) offered to bus operators. “The product is doing very well,”says Sama. But redBus has had its share of hiccups too. During the economic slowdown, hiring was a problem as people were not willing to join a start-up. But that’s past. Well funded by VCs, redBus is zooming ahead.

Sandeep Maheswari
Mash Audio Visuals Sandeep Maheshwari, founder, Mash Audio Visuals, is happy. His firm has scaled up operations from Rs 3.2 crore in 2007-08 to Rs 10 crore this FY. Mash Audio was five years old when it made it to the top five of the Most Promising Entrepreneurs last year. A year down the line, it has another website ShotIndia.com apart from Imagesbazaar, its photo-stock website, with more than 5,000 registered users and 110,000 images. As a proud Maheshwari says, “During recession, although our sales figures dipped, we managed to increase our advertisement budgets 10 times.” Their next step is to introduce a 3D photo stock and launch video stock for Bollywood and television commercials. The company is looking for funding from VCs to push growth.

Lekh Joshi
Mango Technologies Last month, Mango Technologies, which makes rich applications for low-end mobile phones, sold its user interface software to wireless semiconductor giant Qualcomm. The size of the deal was not disclosed, but it gave Mango’s VC investor, Ojas Venture Partners, a return of 70 per cent on its investment of less than $1 million. The deal gives Mango (one of the 2009 winners), founded by Sunil Maheshwari and Lekh Joshi in 2006, the resources to move into new areas. It’s now developing new applications for sectors such as agriculture, education, e-governance and healthcare. “Many people have content but cannot reach out because of higher costs. This application will enable them to do that,” says Maheshwari, the firm’s 25-year-old co-founder and CEO.
(This story was published in Businessworld Issue Dated 29-03-2010)
Tags assigned to this article:
magazine bw young entrepreneurs masplantiz technologies rope redbus mango technologies