The Fight For Fitness 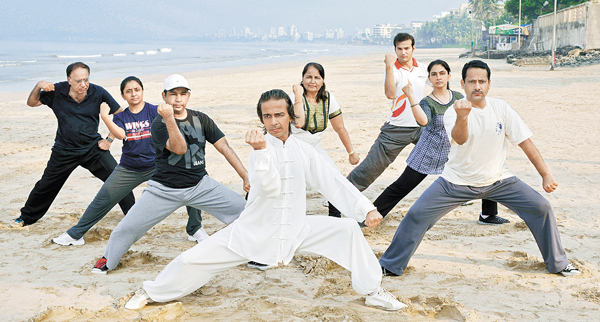 08 November, 2014
Print this article Font size -16+
Thirty-eight-year-old Manisha Jain is a senior executive in a leading multinational company in Mumbai. Peer pressure, a desire to look good and stay fit had this mother of two joining the gym off and on. “Somehow, spending hours on the treadmill, lifting weights or doing crunches never really worked for me. It’s like my body was on autopilot, while my mind was elsewhere.” Moreover, the grilling exercise routine tired her out. “I knew I was supposed to feel good after an hour in the gym, but I never did,” says Jain. So when a friend suggested to her tai chi — a centuries-old Chinese martial art, Jain laughed it off. “I had seen YouTube videos and it all seemed rather exotic, almost like a dance form. But I didn’t think it had any real benefits.” Yet she decided to go just for a lark, pretty sure she wouldn’t attend another class. That was three years ago, and Jain hasn’t missed a class since.
“I go for tai chi three times a week now. I was surprised at how energetic and good I felt at the end of the class. I was totally hooked.”
Tai chi, short for tai chi chuan, is a combination of physical exercises, breathing techniques and meditation. Unlike other external martial arts such as karate or kung fu, tai chi is an internal martial art that promotes serenity through gentle, flowing, low-impact movements. “It’s a subtle art. The goal is not to smash a board or fight an opponent. Also unlike karate and kickboxing, the focus is not on building muscles. Tai chi focuses on calmness. It, in fact, shuns the violent streak. It has a spiritual tone,” says Mumbai-based Sandeep Desai, who has been teaching the Chen style of tai chi for the past 14 years.
Tai chi, often described as meditation in motion, is all about harnessing Chi — the all important life force — and channelising it to the energy centres of our body. Net result: a complete de-stress. “It works on the central nervous system, calming the mind, and in the process reduces stress-related problems,” says Chennai-based tai chi instructor Sifu George Thomas who has been practising the Yang style for over a decade.
And does it help lose weight? Yes, it does. Tai chi’s slow flowing movements done for an hour can burn up to 300 calories. “The moves can be done slowly, but the faster you do, more calories are burnt,” says Desai. And if the aim is to lose weight, then tai chi should be done in the morning before breakfast, he says.
However, Desai points out that there is a lot more to tai chi than just losing weight. It’s a three step process — heal, enhance and then maintain your body. It makes you fitter and more agile as a lot of focus is laid on loosening the joints — every joint in your body should rotate on its own. You start with the standing meditation posture where you learn body alignment. For instance, your hips should not protrude backwards, shoulders should not pop up, chest should not be puffed up, stomach muscles should be relaxed and you should not lock your knees. Once you have perfected the posture you move on to joint loosening movements or circles which represent yin and yang energy and you need to learn yin and yang separation. There are 7-8 such movements which enable each part of your body to move independently. Every movement requires stretching. “Tai chi improves your reflexes, balance and concentration and makes you aware of your surroundings,” says Desai. Adds Thomas, “It revitalises and rejuvenates you, slowing down your ageing process and strengthening your immune system.”
While a lot of benefits of tai chi are similar to those of yoga, the two are very different in action. In yoga you need to hold on to a posture; tai chi is fluidly mobile. “It’s like a flowing river. Running water which does not stagnate,” says Desai.
While some benefits of tai chi are visible from day one, it’s not a quick fix. Undergoing training is a tall order and the art is perfected over years. But making it a part of your daily life will not only help keep you healthy and increase your life span, it will improve the quality of your life. As Jain puts it simply: “It makes you happy.”