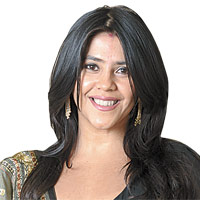 08 November, 2014
Print this article Font size -16+
Ekta Kapoor
Joint MD, Balaji Telefilms
SMALL SCREEN DIVA
Ekta Kapoor scripted an early entry into satellite TV homes in India with hits like Hum Paanch in the 1990s. The workaholic daughter of yesteryear star Jitendra became a household name with her ‘K’ series soaps like Kyunkii Saas Bhi Kabhi Bahu Thi. She and her mom Shobha Kapoor, managing director at Balaji, then took risks, investing in films. But the Kapoors could not quite replicate their TV success on the big screen. Between 2007 and 2009, Kapoor went through a bad patch but has now bounced back with shows like Pavitra Rishta (Zee TV), and a healthy surge in revenue (Rs 322 crore turnover for 9 months of FY 2014). Still only 39, Kapoor’s next shot is Balaji Spark, a talent management firm, and BOLT Media, an ad film unit for brand promotion.

Kiran Mazumdar Shaw
CMD, BIOCON
QUEEN BEE OF BIOTECH
If Indian biotech today has a global profile, a large part of the credit goes to Kiran Mazumdar Shaw. A true garage success story, this daughter of a master brewer at UB, began in 1978 by founding a company that supplied industrial enzymes. She evolved it into a bio pharma firm, addressing the needs of cancer and diabetes patients among others. Through Syngene (contract research) and Clinegene (clinical research) Shaw entered fast-growing categories. An outspoken activist, Shaw is now giving back to society through Biocon Foundation.

Ritu Kumar
Fashion designer
FASHIONING A TREND
With over 45 years’ industry experience, Ritu Kumar has been there every step in the history of Indian fashion. Starting her business with four hand-block printers and two tables in a small village near Kolkata, West Bengal, Kumar weaved her way to dressing up the crème de la crème of Indian glitterati, and even international figures such as princess Diana and the pop band Spice Girls. She is credited with pioneering the boutique culture in India through her brand Ritu Wears. Appointed the first woman president of the Fashion Design Council of India, the sexagenarian’s designs have moved with times and stayed contemporary.

Nita Ambani Chairperson
Dhirubhai Ambani International School
DIFFERENT STROKES
Think Nita Ambani, and the image that comes to mind is of her at Indian Premier League matches cheering Mumbai Indians (MI), a franchise she co-owns. She helmed the team’s success through the hard-fought 20:20 format of cricket. She may have married India’s richest industrialist, but the middle class girl has not rested on that laurel, carving her own space in education and philanthrophy. She is the architect of the Dhirubhai Ambani International School and heads the Dhirubhai Ambani Foundation that provides education and healthcare to the underprivileged.
Tags assigned to this article:
magazine biocon nita ambani kiran mazumdar shaw chitra narayanan ekta kapoor balaji telefilms magazine 24 march 2014 the c-suit women magazine supplement 24 march 2014 ritu kumar dhirubhai ambani international school