The Edge Of Change: Apple iMac 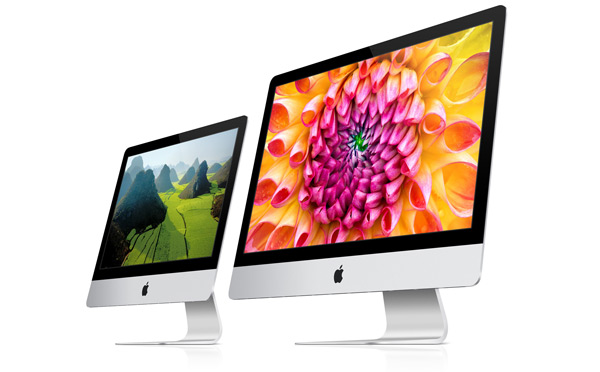 08 November, 2014
Print this article Font size -16+
It's been more than obvious that Apple's focused on its portable and mobile offerings over the past couple of years, relegating the iMac desktops to the sidelines. So when you gaze upon the still-rather-pretty latest generation iMac, you'd be forgiven to believe Apple didn't change much about the iconic all-in-one desktop. In fact, if you look at it from the front, the new model is practically indistinguishable from the previous generation iMac.

But that illusion is broken (and how!) the moment you look at the iMac from an angle. The difference is jaw dropping; this thing is thin in a manner that will make waif-like supermodels burn up with envy! The new iMac drops nearly a full inch at the edges to a mere 5 millimeters. You really have to walk into a store to truly appreciate this beauty. A little warning is in order - product photos might lead you to believe that the whole system is LCD-thin throughout. Not the case - all of the computer components have to fit in someplace, and the iMac tucks most of it away by a deeper almost-bubble like curvature on the back of the machine.

Yet, the differences are more than skin deep. You see, a 5mm edge doesn't really leave room for much of anything, so some parts got moved around, while others didn't even make the cut. For instance, no optical CD/DVD drive anymore, much like the Mac mini - which is a bit of a shame since the iMac packs in such a beautiful full-HD display for watching movies. At this price, you could argue that Apple ought to supply an external DVD drive although the company is clearly putting its weight behind a total migration from optical discs to entirely online distribution of music, video and software. If you still use CDs or DVDs you'll need to add a portable £69 Apple SuperDrive.

Apple has learned a lot so far in packing a whole lot into whole little bit of space with their MacBook Air line of ultraportable notebooks. In the iMac, you can see much of that learning put to good use -carefully stacked logic boards, custom designed speaker housing, an intricate cooling system along with the use of a revolutionary new friction-stir welding process, more commonly used in the aerospace industry, to bond the front and rear panels together. And much like the MacBook Airs, you get minimal upgrade potential — the 21.5-inch iMac is an entirely closed box, with nothing intended to be user-accessible, while the 27-inch iMac has a small panel by the power socket that allows access to the memory but nothing else.

That said, despite its thinness, it does pack in capable computer inside - the latest Intel processors, 8GB of memory and a roomy 1 TB hard disk. It's not revolutionary (similar specs appears elsewhere), but it's more proof that Macs continue to compete with PCs on any level. No matter which size iMac you choose, you get the same connectivity options — a 3.5mm headphone jack, an SDXC memory card reader, four USB 3.0 ports, two Thunderbolt ports, and a gigabit Ethernet port. Under the hood, there's WiFi a/b/g/n and Bluetooth 4.0, and around the front, a FaceTime HD camera above the display, together with a pair of digital microphones that can use what is called beam-forming technology to isolate your voice from ambient noise. Where it lacks is average graphics performance in the base models and very run-of-the-mill speakers. Oh, and another bummer - you cannot order a model with the much vaunted Fusion Drive, which gives you the performance of flash memory storage and the capacity of a hard drive.

The new iMac leaves me then with mixed feelings. That high-end screen alone will ensure that the iMac finds a willing audience among professional designers, photographers and illustrators. It'll be perfect for video-editing work as well, and it's one of the few Mac models that is suited to some serious gaming action too. The new design is awe inspiring, but how often do you tilt your desktop to stare at the edge? I'm just saying the competition for all-in-ones has evolved considerably over the years, and as superbly crafted and capable as this baby is, if you're the sort who equates power to price or wants a touchscreen all-in-one, you may want to look elsewhere.