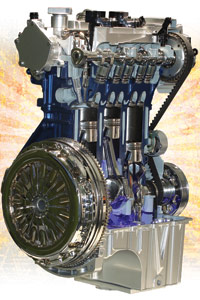 08 November, 2014
Print this article Font size -16+
A petrol engine to power an automaker’s dream of capturing a slice of the Indian market? And, a small engine at that? To the chorus of naysayers, this is exactly what Ford India hopes will fire up the auto mart. In a country increasingly hung up on diesel — till recently, Rs 20 cheaper than petrol (it is still cheaper by about Rs 15 after the recent price hike) — and on ever larger cars of the SUV ilk, a 1-litre, 3-cylinder engine may appear to be a lost cause.

The arguments for diesel so far — one, the huge gulf between petrol and diesel prices in India more than nullifies the higher tag of over Rs 1 lakh on diesel cars and SUVs as compared to their petrol variants; two, diesel engines offer greater fuel efficiency and mileage. In the current fiscal, around 55 per cent of the 1.75 million cars sold so far have been in the diesel category, according to estimates by industry sources.

Expectedly, in such a scenario, petrol-fired vehicles have been a losing proposition for carmakers; they have had to resort to heavy discounts to reduce inventories. Going against its natural inclination, even Honda Motor has been forced to come up with a diesel model for the Indian market to shore up its sagging sales.
Call it audacious, but Ford India is ready to counter the diesel onslaught with a petrol heart — its parent, Ford Motor’s award-winning EcoBoost 1-litre, 3-cylinder engine, which is estimated to give 20-25 km to the litre! It will be sported by the soon-to-be-launched EcoSport SUV.

In fact, the 1-litre version could be just the start. Ford is hoping to revive its sagging fortunes in India with a whole line-up of cars sporting the EcoBoost series, to be launched between 2013 and 2016. Sources say that initially, the engines will be imported from China, though they may be manufactured in India in the long run. “This engine satisfies the three objectives of the new generation — first, it gives them fuel economy and efficiency; second, it provides power like a 1.6-litre engine; and lastly, it is good to the environment,” says Michael Boneham, former managing director of Ford India.

With its EcoSport SUV, Ford is planning to target the affordable SUV segment in India, which is growing at 62 per cent year on year and is dominated by diesel engines. SUVs in the price range of Rs 7-15 lakh sold 4,27,836 units in April-January 2012-13 compared to 2,64,047 in the same period in 2011-12, according to Society of Indian Automobile Manufacturers (SIAM). The leaders in this segment are M&M, with its XUV500 and Quanto, and Renault with its Duster, which has been selling an average of 4,000 vehicles a month since its launch in July 2012.

“The EcoSport is going to change the way one perceives a petrol vehicle because of the engine’s mechanics,” says Shrawan Raja, managing editor of Indianautosblog.com, adding that it really packs the punch of a larger engine.

One Ford Strategy
The EcoBoost engines are a result of the One Ford strategy — focus on core brands, and as one company — launched five years ago. The first in the series was a 3.5-litre V6 engine (launched in 2009), which was made specifically for large pick-up trucks. “This engine spec for that segment was unheard of in the US. But the engine has become a success,” says Frank Hoffmann, powertrain planning manager for Asia-Pacific at Ford Motor Company, adding that it had the same power as that of a V8 — so loved by truckers — in a six-cylinder engine. About 520,000 Ford cars powered by EcoBoost have been sold around the world and by the end of 2013, Ford plans to sell 90 per cent of its cars equipped with the EcoBoost series of engines.

The Ford EcoBoost engine reduces greenhouse gas emissions by about 12 per cent, and increases fuel efficiency by 12-15 per cent compared with conventional petrol engines, according to analysts. “In developing markets where setting up electric vehicle infrastructure is going to take time, such fuel-efficient engines make sense,” says Akshay Bhalla, managing director of Protiviti, a consulting firm.

Ford’s global family of EcoBoost engines consists of the 1-litre, 3-cylinder series, which will be available in the new Fiesta by 2014 in North America; the 1.6-litre version in Escape and Fusion; the 2-litre one in Focus ST, Fusion, Taurus, Edge and Explorer, and the 3.5-litre V6 in the Taurus SHO, the F-150, Flex and Lincoln vehicles.

“It is in the technicalities that we can compare the best of this engine with diesel engines,” says Hoffman. It has a small turbo charger with low inertia, which provides a higher boost, and its three cylinders have direct injection with variable valve timing technology where the compression ratio is balanced for performance and efficiency. “The engine ECU software has 125 patents filed,” says Hoffman.

In 2011 and 2012, the EcoBoost 2-litre series was voted the most fuel-efficient engine by WardsAuto of the US. It will be sported by brands in B and C segment cars. “One must understand the role of the turbo charger and direct injection if one is to move from diesel technology to such petrol technology,” says Hoffman, explaining that direct injection helps in cooling down the engine while the turbocharger extracts more power from it, all this happening under high pressure in the combustion chamber, much like a diesel engine.

In terms of performance, EcoBoost is much better than the older gasoline engines since it uses the same technology as modern diesel engines. The 1-litre, 3-cylinder variant is one of the most powerful direct overhead camshaft (DOHC) engines of its kind. Only Volkswagen has 3-cylinder, smaller displacement petrol engines which are yet to be mass produced. The 1-litre and 1.2-litre engines will be available in the Volkswagen R3 and Up soon.

Others carmakers, too, have this technology but are yet to launch in India. The difference is that they all have four-cylinder engines. The BMW 2-litre engines, called N20, are for smaller sedan and hatchback segments, while GM’s 2-litre Ecotec will power the Cadillac brand.
break-page-break
Ford is expected to have an early mover advantage in developing markets. For Ford India, that will be critical since 2012-13 has been a dull year. The company sold 66,180 cars in April-January 2012-13 compared to 73,401 units in the same period in 2011-12, a negative growth of 9.8 per cent. It can no longer depend on the Figo, which has sold 200,000 units in two years. It then boils down to the EcoSport, which is likely to be launched both in diesel and EcoBoost petrol versions in the first quarter of 2013-14.

The EcoSport was unveiled at the Indian Auto Expo 2012 and was supposed to have hit the markets by December 2012. The delay, sources say, has been on account of working out the logistics of keeping the price of the SUV low. Apparently, the North American team, in conjunction with its Indian counterparts, had to rework the entire tooling to bring the price between Rs 8 lakh and Rs 10 lakh for the EcoBoost version and between Rs 10 lakh and Rs 12 lakh for the diesel version, said a source.

The 1-litre petrol version has an added advantage: taxes will be very low on a car fitted with such a low displacement engine. This could work in favour of the company and help it compete with the likes of Mahindra & Mahindra and Renault.

In addition, Ford has been working on increasing the extent of localisation, around 90 per cent for the Figo and Fiesta, as well as ramping up its dealerships across India. In anticipation of the SUV, the dealerships have gone up from 150 centres two years ago to 250 sales and service outlets across 130 cities now.

“We are working on localising the entire powertrain at our Chennai flexi-engine plant for export. Forty per cent of the engines are exported, now” says Joginder Singh, managing director of Ford India. Ford’s global suppliers are coming to India and, in some years, the entire powertrain will be localised, says Singh.

If sources are to be believed, the EcoBoost engine will eventually be made at Sanand, Gujarat. Ford has invested $2 billion in the country and by 2015 will have the capacity to produce 600,000 engines at its Chennai and Sanand plants.

“We are already preparing the branding strategy of this engine as part of the larger mini-SUV story,” says Anurag Mehrotra, vice-president of marketing at Ford India.

The Diesel Challenge
Despite its credentials, the EcoBoost engine will still have to contend with diesel counterparts such as M&M’s Mcr100 1.5 litre engine, the Renault-Nissan alliance’s K9K series and Fiat’s 1.3-litre multijet engines, which together sell close to 650,000 units. Of these, 75-80 per cent are Fiat’s multijet engine that goes into Maruti’s Swift and Dzire, Tata Motors’ Vista and the Chevrolet Beat.

However, policy pronouncements on fuel prices have raised hopes of a correction in the recent skew against petrol vehicles. The government’s plan to raise diesel prices every month by 50 paise until the subsidy goes is expected to diminish the Indian buyer’s fascination with diesel.

The Indian market is expected to sell close to 5 million cars per year by 2015, but automobile companies remain unclear about future policy. “We have invested in a 100,000-unit petrol engine line. Currently, we are using it to produce only 10,000 units per year. In the long run, the market will rationalise towards either gasoline or hybrid cars,” says Sandeep Singh, deputy managing director, marketing, Toyota Kirloskar Motor.

According to Singh, India is an underpenetrated market with only 10 in 1,000 people owning cars. “India is going to be a huge market in the next decade and, in terms of efficient engines and affordable SUV segments, there is a case for lower displacement petrol engines here.”

Others such as Hyundai are already building a flexi-engine plant to move from diesel to petrol cars seamlessly. The success of the EcoBoost engine will depend on Ford’s ability to make the consumer understand the benefits of such a technology. “Ultimately, it is the cost-of-ownership calculation that makes all customers think about buying a car,” says Kumar Kandaswami, director at Deloitte Touche Tohmatsu India.

So, even if the Ford EcoSport is launched with the EcoBoost technology, that alone may not be enough to change Ford India’s fortunes. The company would still have to launch smaller hatchbacks and sedans for the Indian consumer with the same technology. It may have convinced the American pick-up truck owner, but first-time buyers in India are a far more difficult proposition.