The Desktop Gets A Makeover, Courtesy Of Apple 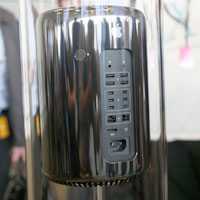 08 November, 2014
Print this article Font size -16+
Apple Inc, known for its bold experiments with computer design, has come up with a radically re-imagined Mac Pro that departs from the venerable, boxy design of the typical desktop personal computer tower.

The company on Monday (10 June) offered a sneak peek at a top-of-the-line computer destined for store shelves later this year: a sleek cylindrical chassis that, according to Apple, packs several times the processing power of its predecessors but stands just shy of 10 inches.

The new Mac Pro, with a yet-to-be-determined sales date and price, again features an Intel Xeon microprocessor - used mainly in high-end computer servers - and a full-length cover that slides upward to reveal its innards.

It will be assembled in the United States, marketing chief Phil Schiller told an audience of thousands at the opening of Apple's annual developers' conference in San Francisco on Monday. Other executives later outlined a number of new features in redesigned mobile software for iPhones and iPads due this fall, and talked about an "iTunes Radio" music-streaming service.

"Can't innovate anymore, my ass," remarked Schiller, addressing public criticism from industry analysts and investors that Apple's famed innovation prowess had died along with its legendary co-founder Steve Jobs in 2011. "This is a machine unlike anything we've ever made."

The personal computer has looked largely the same for decades - an oblong case that houses components like memory and graphics cards and processors in orderly rows, interspersed with thickets of messy wiring. The box itself has shrunk over the years but the concept essentially remains the same.

Rounding The Square
The previewed Mac Pro, in contrast, bristles with miniature circuit boards ordered in sections around the circumference of its round case, broken up by a front panel for external connections. Reminiscent of a thimble or fat cigar, the company claims it offers a glimpse into "the future of the Pro desktop."

"There has been some criticism of Apple that their products of late have been fairly evolutionary, sort of incremental adjustments as you move from generation to generation. This was clearly a very big step forward in this particular platform," said Robert Brunner, founder of design consultancy company Ammunition Group and a former head of design at Apple.

Brunner, whose company does not currently work with Apple, said older Mac Pros were bulky and threw off a lot of heat, and could benefit from a redesign. The new machine features what Apple calls a "unified thermal core" that spreads heat equally across its processors - typically the hottest parts of a PC.

The Mac Pro is Apple's costliest computer, employed primarily for graphics-intensive tasks such as video-editing and design. The current, top-of-the-line version today sells for as much as $3,799.

Apple was lauded for the novel look of the first, pastel-colored iMacs in the late 1990s, which proved popular with consumers.

"A glass block cylinder is not a new thing; it's been done in all kind of products," Brunner added. "But when you look at how development and engineering could put that sophisticated a computer in that small cylindrical form, that's pretty huge."