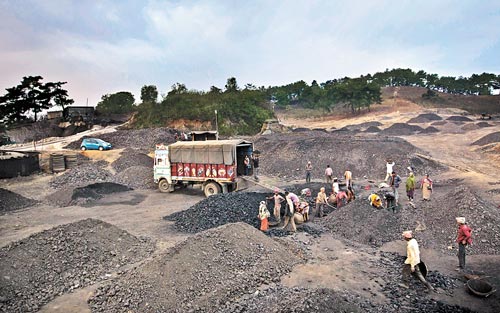 08 November, 2014
Print this article Font size -16+
Most of the 57 firms named in the CAG report are little known. An examination of the data available with the Registrar of Companies raises grave questions about the logic behind the allocation of coal blocks, as many of the allottees either have no prior experience in mining, have questionable track records or their financials are too weak to allow them to even buy basic mining equipment.
Take, for instance, Vini Iron & Steel Udyog. It was incorporated in 2004 for Rs 18,95,000. In 2005, it decided to develop a 0.5 MTPA integrated steel plant at Chandil in Jharkhand. In January 2007, its founder Vaibhav Tulsyan applied for coal blocks, but the project never took off due to Naxal problems. “In May 2008, Vijay Joshi approached us to buy the company,” says Tulsyan. “We transferred all our shares for Rs 4.36 crore.” In November 2008, Vini Iron was allotted the Rajhara North coal block in Jharkhand. Joshi is now being probed for links with former Jharkhand chief minister Madhu Koda.
Companies such as JLD Yavatmal Energy was set up with paid-up capital of Rs 2.85 crore. Interestingly, JLD was originally formed to generate power using coal from the Yavatmal blocks in Maharashtra, but it was allotted the Fatehpur East Block in Chhatisgarh instead. RKM Powergen, Vandana Vidyut, Visa Power and Green Infrastructure (now Athena Infraprojects) are co-owners of the block. JLD has no website, but shares two directors with Jayaswal Neco Industries (JNIL), whose owners are related to Manoj Jayaswal, head of Abhijeet Infrastructure. Both companies are now being probed by the CBI.
“JLD Yavatmal Energy was a special purpose vehicle formed by Lokmat Newspapers, Abhijeet Infrastructure and Infrastructure Development Finance Company. JNIL is an independent entity, and it is not related to JLD Yavatmal Energy,” says Jayaswal Neco in an email response.
Mednirai Coal Mining Co. was established in 2009 by Kolkata-based Kohinoor Steel and Rungta Mines after being awarded the Mednirai block in Jharkhand. The firm, which now owns 29 MT of extractable reserves (CAG estimate), was set up with an equity capital of just Rs 1 lakh. Rungta Mines has been hauled up many times for violating forest norms and mining in excess of the approved limit. Neither of the companies has responded to BW’s emails.
There is also Jindal Photo (JPL), part of the Delhi-based B.C. Jindal Group. It specialises in manufacturing photographic and allied products — a sector that has nothing to with mining. Yet in January 2008, JPL was able to form a joint venture with Tata Power and Monnet Ispat and become part owner of the Mandakini-A coal block in Orissa. The company, too, did not respond to BW’s email questionnaire.