The Curious Case Of History 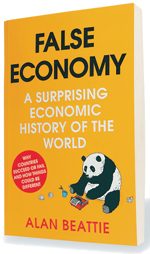 Why are some countries poor while others are prosperous? Why does Egypt, which has the world's most fertile land, import half its staple food? Why do some countries collapse under corruption, while others do not? Why is a non-democracy such as China economically stronger than India, a democracy? And why are pandas so useless?

Alan Beattie, world trade editor of the Financial Times, tries to answer such curious questions in this book. It raises nine such questions, or rather conundrums, and answers each in nine chapters. It is not fate that determines a country's history, says Beattie.

The author starts with the example of how mainland America is so different from South America (Brazil, Argentina, Chile, et al). Beattie points out that roughly a century ago, the US and Argentina were identical countries. Argentina was even better off — it was one of the 10 largest economies in the world. But look at what they are today. What changed in 100 years to make one country the world's largest economy and the other a member of the impoverished Third World club?

The author examines various factors, including even Argentina's obsession with football. The country's economy heavily relied on farming in the past, while the US built on agriculture to move up the ladder to embrace industrialisation as the growth engine. Also, while the US adopted democracy to take the nation forward, Argentina slipped into dictatorship. Also, the Great Depression in the 1930s hit Argentina badly, as it was largely an agriculture economy and relied on food exports. The country isolated itself from the rest of the world in an attempt to stave off external trouble. This, says Beattie, was Argentina's biggest mistake, which changed the destiny of the country forever. Both Argentina and the US had the same opportunities, but their choices were different. So, the history of a country, says Beattie, is determined by the decisions it makes. Those who made good choices performed; those who did not perished.

But is it as simple as that? Going by this theory, any country could have been like the US had it taken right choices at the right time. But the problem is: in a country's history, right and wrong will become evident only after a long period — perhaps a hundred years, as in Argentina's case.

Countries cannot do anything about history, but they can change the future. So, can Pakistan still aspire to become the US? That is another contradiction Beattie's theory throws up. He says once decisions have been made, it is difficult to change the course of history of a country.

Beattie's prose is peppy, but lurid. The impatience with which he jumps from one topic to another — and back — could make the reader wonder what the fuss is all about. Life will be much easier when one discovers the theme of the book is embedded in the first chapter itself. But skipping other chapters will mean missing on some interesting trivia. Not many books tell us why Indonesia flourished under a corrupt dictator, Suharto, while Tanzania — whose first president, Julius Nyerere, was known to be an honest, modest man — crumbled. Suharto's regime followed systematic corruption, while Tanzania's dishonest officials betrayed their assiduous president.

During Suharto's three-decade-long rule, Indonesia grew to become a middle-income country. In contrast, Tanzania's fate was to become a poor country. Did organised and centrally monitored corruption work for Indonesia as an incentive for the bureaucracy to work hard, Beattie wonders, while a corrupt but loosely controlled bureaucracy fail Tanzania?
The author takes the example of India and China. Both are almost equally corrupt, as per Transparency International rankings. Then why is it that China gets more foreign direct investment than India?

Beattie recounts his interaction with a senior Indian official, who said, "the thing with China is that there is only one party to bribe". The conclusion: if corruption is stable and predictable enough, it becomes a tax for investors. In other words, Bettie says, if you are going to have corruption, best have it in an efficient and streamlined way.

Even though the journalist-author has succeeded to a great extent in driving his collection of thoughts into readers' minds, some of his points are politically incorrect. Perhaps, successful journalists should stick to what they are good at — journalism — rather than collect their loose, crazy thoughts into books.

Author Details
Alan Beattie is world trade editor of the Financial Times in London. He joined the daily in 1998 after working as an economist at the Bank of England. He holds a Master's degree in economics from Cambridge, and a Bachelors in modern history from Oxford. He writes about economic globalisation, trade, development and aid. This is his first book.