The Cult Of The Olive 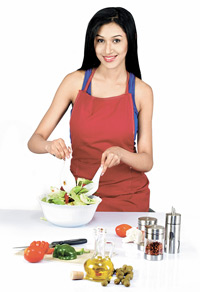 08 November, 2014
Print this article Font size -16+
If your resolution for 2013 is to eat healthy, you are walking on slippery terrain. On the one hand, we have more food choices: Local and exotic vegetables, fruit, superfoods like almonds, walnuts, prunes, old-turned-trendy grain aka quinoa, spelt, millets, and a range of cooking mediums. On the other, there is an increasing problem in identifying what exactly is healthy.
One category especially difficult to decipher in India is olive oil. Increasingly seen as a miraculous potion to sort out all your health issues, olive oil — in its many retail avatars — is being adopted across thousands of middle-class homes. It is one thing to jump on to that bandwagon; another to understand what really you are buying and why.
On a recent tour to Italy, I visited a cross-section of Extra Virgin Olive Oil (EVOO) producing and bottling companies under a programme sponsored by the European Union and the Italian ministry of agriculture. In the process, I met many stakeholders, health experts and consumers and managed to demystify the confusing world of olive oil.
As one of the cornerstones of the much-emulated Mediterranean diet, olive oil is one of the healthiest cooking mediums around. The catch lies in what we are buying. Sometime ago, journalist Tom Mueller, author of the book Extra Virginity: The Sublime and Scandalous World of Olive Oil, had created ripples by investigating labelling frauds and pointing out that not all “virgins are as pure as they might seem”!
However, even if labelled correctly, olive oil in retail leaves one bewildered. Should one pay a premium for EVOO (which can be up to 10 times the cost of regular seed cooking oil)? Or should one buy “olive oil” as it is categorised? Or, “olive pomace oil”— being sold often as “best for Indian cooking”? (The last is a claim not necessarily correct because EVOO can be used for frying, sautéing, tadkas… with its smoking point of 220 degree C higher than frying temperatures in domestic kitchens which hover at 180 degreesC.)
First things first: Let’s clearly establish the fact that EVOO is the highest quality of olive oil — mechanically pressed without solvents, under temperatures that will not degrade the oil. It is not refined, is fresh and full of polyphenols and antioxidants (apart from omega 6 fatty acids). This is also the oil with all the associated health benefits that you hear about and one that you should use — if you can afford it.
But what are the health benefits that you can expect from EVOO? In Italy, a common saying is that two tablespoons of EVOO a day keep a host of troubles (including gastric ones) at bay. You may or may not take that literally. However, were you to switch to just two tablespoons per person of EVOO as your entire daily fat intake (of any kind, doing away with so many saturated, trans and other fats in our diets), you can indeed expect several benefits.
Before we list these, it is good to remember that while antioxidants, polyphenols and monounsaturated fats in EVOO make this “healthy”, it is not a magic pill. It is still fat and you cannot use unlimited quantities. One fruit a day like an apple or veggies like broccoli and carrots will possibly have more nutrients (without the calories). But as a cooking oil rich in monoun-saturated fatty acids, it breaks down at a higher temperature than other mediums. This means that harmful radicals causing congestion of the arteries and joint disease are less likely to form and the same oil itself can be used twice more for cooking.
So what are the top health benefits attributed to EVOO?
Healthy heart: Apart from bolstering the immune system and protecting against viruses, olive oil helps lower cholesterol. Studies suggest that regular consumption can help decrease both systolic and diastolic blood pressure.
Oxidative stress and cancer: Olive oil is rich in antioxidants, especially vitamin E, long thought to minimise cancer risk. Studies suggest it exerts a protective effect against certain malignant tumours —if eaten as the main fat source.
Diabetes: A recent Spanish study published in the journal Diabetes Care showed that a Mediterranean style diet rich in olive oil reduces the risk of type II diabetes by almost 50 per cent compared to a low fat diet.
The bottomline: Cook with it, drizzle it on salads and grills, but do so in moderation. It’s still got calories!
Anoothi Vishal is a Delhi-based food and travel writer.