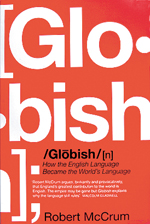 This interesting book discusses how English has both shaped and been influenced by geopolitics. Globish: How the English Language became the World's Language traces not only the colonial spread of the language, but its vast contemporary sweep. It's enjoyable to revisit the history of a language that is native to one small island in the north Atlantic and its place in the military and cultural colossus that is the US.

But author Robert McCrum does not stop with this exciting historical canvas. He goes on to ask, then what? Despite the waning of Anglo-American power on the global consciousness, English is rolling on its own momentum. The book reflects on the continued and unprecedented spread of English; McCrum calls it the cultural revolution of the times.

McCrum is a consummate story-teller. He relies on little-known and charming anecdotes. The events are arranged chronologically, but McCrum does not hesitate to draw relevant parallels by showing how, for example, the work of ‘neither a scholar nor an artist' printer-publisher of the 15th century, William Caxton, can be linked to George Orwell. Always engaging, this is an exceedingly readable analysis.

Click to read the longer version of the review