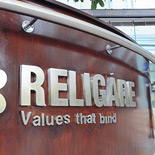 A subsidiary, Religare Finvest, with a book size of Rs 9,000 crore, funds itself through bank credit and commercial papers. Small and medium enterprises (SME) are a focus area. "It contributes 16 per cent to India's GDP, and is expected to grow to 25 per cent over the next five years to reach a market size of $480 billion. It was a virtual no-brainer to get into this business," says Kavi Arora, CEO, Religare Finvest.

It is hard to do a head-to-head comparison with a rival like Edelweiss, another aspirant for a bank licence. It does not have an overseas platform. It is just about venturing into asset management, retail broking and insurance. Though it scores in local investment banking, Religare is only building this business now. "Their platforms are different. Both are similar in terms of the vehicle, NBFC, but are not in the same stage of evolution. There are no ready comparables in terms of numbers," says Rahul Jain, senior analyst at HDFC Securities. "Edelwiess is moving from being a wholesale to a retail player. Religare has almost the entire suite, only investment banking is in ramp-up mode," he adds. In the case of Kotak Mahindra Bank, it had a matured capital markets business by the time it became a bank in 2003, after having started out in 1985. Religare has its ancestry in Fortis Capital, a small NBFC.

The missing piece with Religare (like with Edelweiss) is the "integrator" bank. It does not mean that once a bank comes into Religare's fold, it will fly overseas. "We want to lock into the business opening up between emerging markets," says Basab Mitra, Religare's chief strategy officer. Unlike Edelweiss (net profit of Rs 62 crore for the nine months ended December 2010 on an income of Rs 447 crore), Religare has burnt capital. It posted a net loss of Rs 172 crore for the period on an income of Rs 1,821 crore (nine months earlier, it had a net profit of Rs 96.5 crore and an income of Rs 1,671 crore). This loss was on account of the expenses undertaken to roll out Religare Capital's network and valuation losses taken by the asset management company (AMC). For the nine months ended December 2010, Edelweiss had a profit before tax margin of 22 per cent and a profit after tax margin of 14 per cent. For Religare, it was 28.7 per cent and -4.8 per cent.

The Scoreboard
"It is time Indian banks tapped into trade corridors in Asia. Or Africa; it will be a big market in 10 years," notes Saurabh Tripathi, partner and director at Boston Consulting Group. It is a view that has been aired by RBI governor D. Subbarao. And it is not surprising when Godhwani says, "People will ask, why didn't Uday Kotak do it? Why didn't Nimesh Kampani do it? They are not going global, why are you? Our answer is simple. We clearly see a space that is a ripe low-hanging fruit."

Religare's point in history is different. The financial equivalent of the networked world was still in the works when today's banking stalwarts started out. The icons Religare looks up to are those in India Inc., who rode the waves like Ferdinand Magellan. Religare is a child of the times.

But is there a catch here? Standard Chartered Bank's (StanChart) former global boss Rana Talwar picked up the emerging market blood-trail early on. Under him, StanChart picked Grindlays' franchise in India and West Asia in 2001 for $1.3 billion. DBS Bank, HSBC and Japanese banks consider Asia as their hinterland. It gets crowded with more bounty-hunters, BankAm-Merrill Lynch, JP Morgan, Citibank and Goldman Sachs. Then you have the home-grown State Bank of India and ICICI Bank, which have got their feet wet. Does Religare stand a chance to pull it off? Is Godhwani a newly minted Talwar?

Religare seems to have backed his instincts. It took over AIG Asset Management, and has since built on it. "When you say you have $20 billion of assets under management (AUM), people sit up and look without knowing what you exactly manage," says Godhwani. In 2010, Religare Capital picked up a 70 per cent stake in the US-based Northgate Capital, which manages $3.3 billion, for $84 million. Then came a 55-per cent stake in Landmark Partners, with $8.3 billion in assets, for $162 million.

Religare's Indian AUM stood at Rs 11,500 crore by end-March 2011. "Thirty months ago, Religare AMC was the 40th player to launch its fund operation," notes Saurabh Nanavati, head of Religare Asset Management. It also has Rs200 crore of AUM in its local portfolio and $200 million (Rs 900 crore) in offshore advisory mandates. Paresh Thakker, managing director (global asset management) who also looks after group M&A, is ambitious: "We aim to buy or partner with 8-10 affiliates or AMCs in the next 3-4 years. This could result in an overall AUM of $100 billion."

The script is similar on investment banking. During end-2010, three deals were closed — buyouts of Hong Kong-based Aviate Asia and South Africa-based Barnard Jacobs Mellet; and a 50 per cent stake in Bartleet Mallory Stock Brokers in Sri Lanka. And what happens to these brands? "We will keep them if they have a better recall than Religare's," says Nath. That's much like Coca-Cola's decision to keep Thums Up's fizz. And unlike Citi's — there is no Salomon Smith Barney or a Travelers; only two, Primerica and Banamex, retain their baptist names.

Notes Monish Shah, director at Deloitte India: "If you look at global banks out here, back and middle offices push up their staff numbers. You need to have a front desk. That is why you will see them buying stakes in local brokerages." And "on a like-to-like basis", it is cheaper to buy such outfits globally. "What they appear to be doing is to become a low-cost StanChart," says Tripathi. London-based StanChart bought Pembroke (aircraft leasing, financing), Harrison Lovegrove (oil and gas advisory), American Express Bank (private banking), Cazenove Asia (equity markets), A Brain (South Korean fund administration), Travelex (small business, retail forex), UK-based Fleming Family and Partners, and China Bohai Bank for wealth management.

Religare's global foray has come at a price. It posted a loss before tax of Rs 88.5 crore for the first nine months of 2010-11. "Our investments in the investment banking platform entail reporting losses in accounting terms, as costs towards building businesses are treated as revenue expenditure rather than capital expenditure," explains Nath. "The swing (in performance) has come about because of the overall softness in the market in the third quarter of this fiscal."

The punt is that emerging markets will give a huge upside; $14 trillion of equity issuances in the next 20 years means $420 billion by way of revenues from primary issuance and secondary market commissions. It is the fee that matters; you have to set aside capital when you lend, and it has a premium to it. Perhaps, that is why Martin Newson, global CEO of Religare Capital, is not worried that it does not have a balance sheet. "But tell me how many of these global banks do it? It is one thing to bag a deal on that count, entirely another to do it (lend)."

Who Has Bought Into It?
So far, the Singh brothers, Godhwani and his team have done what they set out to do. They have also put together a team of young professionals — the average age is 37 years. Some — like Nath — have an eclectic background. He has a degree in law and a diploma in intellectual property rights from Amity University. He has worked in the now-defunct Garware Wall Ropes, and at a carpet export firm! "Shachin (Nath) never thought in his life he would be a group CEO. He would never have. Today, he sits as the group CEO with peers who are 10-12 years older than him," says Godhwani. It is a motley crew. Mitra is from McKinsey & Company; Newson came in from Dresdner Kleinwort Investment in London; Arora is from GE Money.

Religare is Latin for ‘to bind together'. Its symbol is a four-leafed clover; it is said that there is just one for every 10,000 three-leafed ones. But are there enough four-leafed clovers to bind together? In fact, what binds the team is that they are building something new. Mitra likes the fact that "there there are no bureaucracies out here". For Newson, it is the thrill of being part of something very different. All have shares in Religare Enterprises, and the verticals they work in.

It also helps that just about every other regulator now peeks into Religare given its global presence. The message with the holding company is that it does not have a window — and does not want — to hook into regulatory arbitrage. "Even if we get a licence, the bank will be a one-drop (a subsidiary)," notes Nath. That's his way of saying Religare will not be a bank-cum-holding company, like Kotak Mahindra Bank.

Religare is clearly in hitherto uncharted waters. It believes it is a path breaker. Yet, so far as it is only an entity out of India. Many from other shores have tried it — some have made a success of it, some have failed. Hopefully, Religare will find enough four-clovers to bind together.